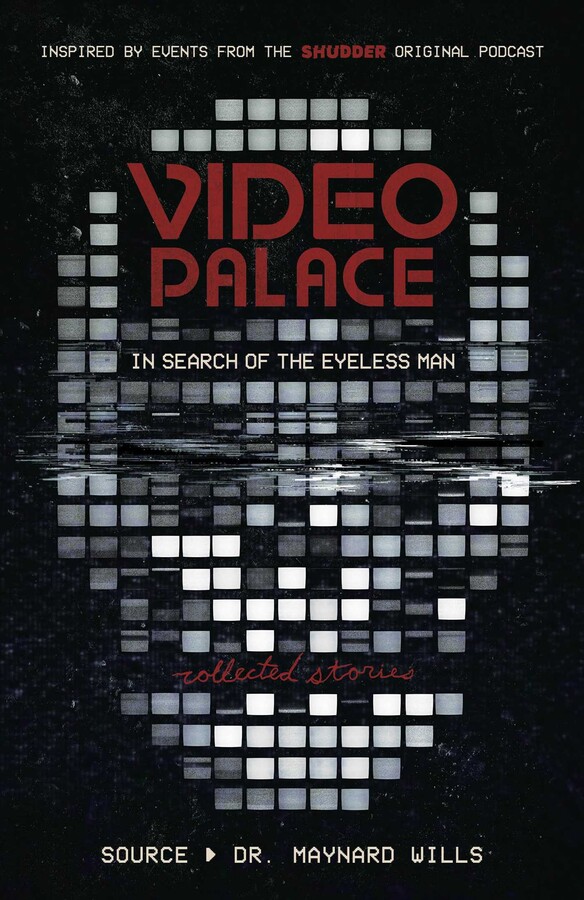 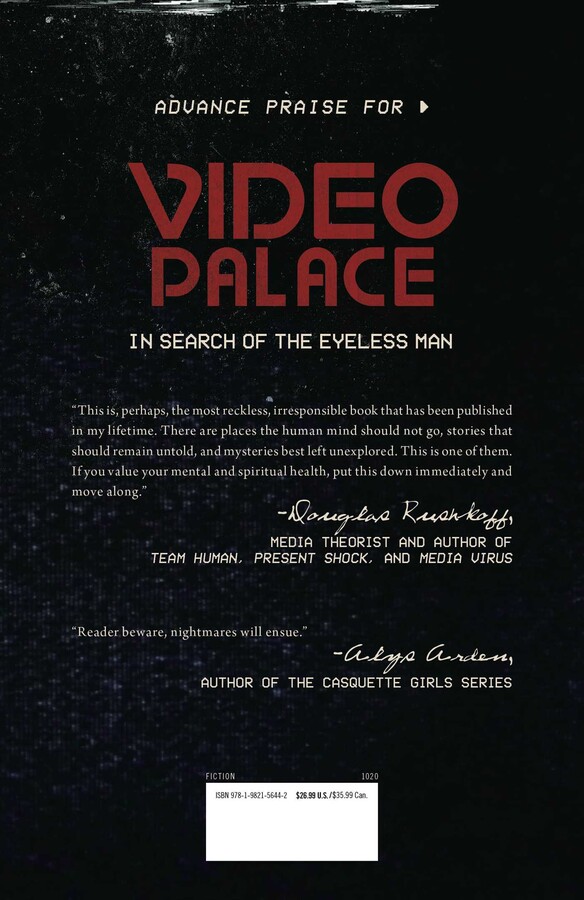 A collection of chilling stories from the leading writers in horror and suspense, exploring elusive urban legends.

Join Michael Monelo, one of the creators of the Blair Witch Project, and TV writer/director veteran, Nick Braccia, on a journey through urban horror and suspense.

Explore the world of Maynard Wills, PhD, professor of folklore and fan of the podcast, Video Palace. The podcast followed a man named Mark Cambria, who along with his girlfriend Tamra Wulff, investigated the origins of a series of esoteric white video tapes. Cambria went missing in pursuit of these tapes, but not before hearing whispers of an ominous figure called the Eyeless Man.

Fascinated by the podcast and Cambria’s disappearance, Wills embarks on his own investigation into the origins of the tapes and the Eyeless Man, who he believes has lurked in the dark corners of media culture and urban legends for at least seventy-five years. As part of his study, he has invited popular writers of horror and gothic fiction to share their own Eyeless Man stories, whether heard around the campfire or experienced themselves.

Get swept away in this thrilling and terrifying horror anthology—which can be read on its own or as a companion to the hit Shudder podcast, Video Palace.

Short stories include:
-“Deep Focus” by Bob DeRosa
-“The Satanic Schoolgirls” by Meirav Devash and Eddie McNamara
-“Doorways of the Soul” by Owl Goingback
-“A Texas Teen Story” by Brea Grant
-“Two Unexplained Disappearances in South Brisbane, Recalled by an Innocent Bystander” by Merrin J. McCormick
-“Dreaming in Lilac on a Cool Evening” by Rebekah McKendry and David Ian McKendry
-“Ecstatica” by Ben Rock
-“The Inward Eye” by John Skipp
-“The Real Sharon Lockenby” by Graham Skipper
-“Ranger Ronin Presents…” by Gordon B. White

1. Dr. Maynard Wills: An Origin Story DR. MAYNARD WILLS: AN ORIGIN STORY
I grew up in a tiny Maine community tucked into Marsh Island’s eastern edge. It’s called Old Town, and old it is, at least by America’s standards. It was settled a couple of years before Hancock dipped the quill that birthed an idiom, and it became a township well before the Southern secession.

Old Town in the 1950s was a nice enough place for a child, but among the Eisenhower normalcy (excepting the duck-and-cover drills), I longed for a taste of the extraordinary. Not so unusual, I know, but my ears pricked up at the mention of anything, well, strange, especially in our little corner of the world. The Monster of Pocomoonshine Lake just two hours’ drive! The Lost Settlers of Norumbega buried right under our feet! I’d loiter around the pharmacy—whether I had the pocket change for a Coke float or not—waiting for the older boys to quit their chatter about girls and pester the soda jerk for twice- and thrice-told folktales, both weird and woeful.

My grandfather, who taught classes a short bike ride away at the University of Maine, recognized this fire inside me and decided to fan the flames. We saw many Saturday monster movie matinees, but he supplemented low culture with high and gifted me Edith Hamilton’s Mythology (superior to that crusty old prig, Bulfinch). My world expanded—exploded!—beyond the parochial scope of soda fountain banter. I became lost in boundless stories that transcended space and time, Heaven and Earth.

I was fascinated by the gods and their dramas. Love! Scorn! Revenge! Death! (It’s no wonder that soap operas and the fine art of professional wrestling later became part of my media diet. Laugh all you want, but they teach this stuff at MIT!)

But my absolute favorite episode concerned mortals: the tragedy of Orpheus and Eurydice. You know the story: Orpheus braves the Underworld to rescue his love, Eurydice, only to turn back and look at her at the last moment, condemning her for eternity. It’s been told by Virgil, Ovid and Boethius. Countless others. Adapted by Cocteau. Hell, I think Guillermo del Toro even alludes to it in Blade II. While I love the bones of the myth, all these tellers have their own twists, their own subtext. Each molded the myth as the story exchanged hands and evolved over epochs. Myths live in a thousand forms; they are organisms of multiplicity.

I sit today at my—extremely—cluttered desk in a shared adjunct office in Manhattan, unsure if I should splurge on a sandwich at Lenny’s but exceedingly grateful that I found my purpose at such a young age. The streets of Greenwich Village certainly are a far cry from Old Town, where I’d spent countless hours wandering the vast, verdant expanse glimpsing (or so I thought) trolls, goblins and fairies wandering the same woods, peeking behind branches and sneering from inside rotted trees.

You can probably already sense that I don’t really fancy myself an “academic.” I don’t have much patience for literary theory and get tied in knots trying to grok the postmodernists. Instead, I think of myself as a story detective. Or maybe a narrative archaeologist? Choose whichever metaphor you like. Both suggest I get a cool-looking hat, so I’m good either way.

It was in the mid-sixties—during my high school years—that my professional identity began to form. The Epic of Gilgamesh was on our syllabus and, as you probably remember, the poem includes a great Mesopotamian flood that’s caused by wrathful gods. My teacher, a wise and patient man named Harlowe, asked the class: Is there another ancient text where we hear about a massive flood? I raised my hand and gasped as I gave the correct answer, the Bible. It was a eureka moment for me—the realization that two separate works of the Old World mentioned a great flood and the implication that perhaps the flood, in some sense, was a historical event in our world’s ancient past that had birthed a multitude of stories.

As much as I loved old man Harlowe, I skipped quite a bit of school so I could hoof (or bike) over to the University of Maine and sneak into the library, where I’d grab a pile of dusty tomes and trace myths and legends across cultures. Then I’d go home and plot their origins and influences on my corkboard like some crazed FBI profiler. (It’s worth noting that at exactly this time Maine’s favorite son, a young Steve King, was studying at U of M. If we ever crossed paths in the library, I didn’t notice. I was too busy hunting monsters, though I like to think we probably cursed each other over borrowed volumes.) Harlowe caught me in there once, on a Saturday, and smiled. I think he understood my absences. I detected a sense of pride.

Now that you know who I am and, well, my origin story, we can discuss my nemesis: the Eyeless Man.

For decades, I have pursued myriad pet projects. Most bring me immense joy, but the Eyeless Man is a source of torment. I have tracked and traced his presence across continents and cultures from the birth of the Atomic Age through today’s digital deluge. He is a shadow, an elusive bogeyman. His story fragments don’t fit patterns as neatly as I’d like and whispers of his name seem to evaporate before I can form any hypothesis with solid footing. I’ve discussed him with like-minded friends—some who have contributed to this volume—but I was ultimately confounded. He was too slippery a phantom, and I was prepared to stuff the bastard in a drawer and be done with him.

And then my teaching assistant, Daniel Carter, told me about Video Palace.

I believe that Mark Cambria and Tamra Wulff lived a version of the myth. What’s true and untrue, I don’t know. Where Mark Cambria is, I have no idea. But I’d like to find out as this legend is birthed in real time.

This book has two tracts. I have extended an invitation to my fellow folklore and urban legend enthusiasts. There are writers, filmmakers and academics among them. And they have either heard campfire tales of the Eyeless Man or know someone who has felt his presence. In some cases, the connection is quite personal. They share their stories in these pages. As they do, you will learn more and more about the Eyeless Man, just as I have.

Between these stories, I will provide interludes that chronicle my search for the origin of this legend, an entity that breeds terror. I’m not afraid, for every story has its beginning, and once I find it, we, my friends, will control its power.

Dr. Maynard Wills is Associate Professor of Folklore at The New School in New York City. He’s spent years studying and publishing urban legends, both domestically and globally. He consults in the entertainment industry and frequently gives talks on popular myths. He’s had a career-long fascination with the entity he believes to be the Eyeless Man and was inspired by Shudder’s Video Palace podcast to publish aspects of his work for a mass audience. At the time of publication, Dr. Wills is missing.

"This is, perhaps, the most reckless, irresponsible book that has been published in my lifetime. There are places the human mind should not go, stories that should remain untold, and mysteries best left unexplored. This is one of them. If you value your mental and spiritual health, put this down immediately and move along." —Douglas Rushkoff, Media theorist, author of Team Human, Present Shock, Media Virus.

“Shudder’s exclusive scripted podcast series Video Palace, created by Nick Braccia and Michael Monello, delivered a 10-part story involving a mysterious VHS tape and its origins. Its lead character went missing in his pursuit of answers, but not before hearing about the Eyeless Man. Folklore professor Dr. Maynard Wills, Ph.D. embarks on his investigation of the Eyeless Man here, inviting popular horror and gothic fiction writers to share their own Eyeless Man stories. Braccia and Monello edit a hefty collection of shorts that enhance the ever-growing world that began with the podcast. Look for stories by genre stalwarts like Graham Skipper and Brea Grant. It’s a comprehensive companion piece, and the mid-October release date gives plenty of time to catch up with Shudder’s podcast.”—Bloody Disgusting’s Fall Reading Guide: 10 Books to Read This Halloween Season