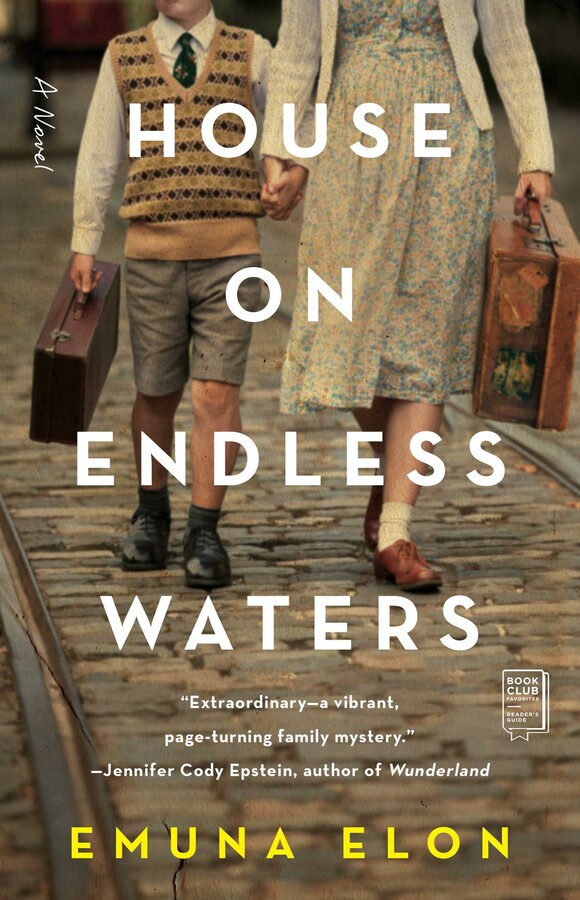 An Atria Book. Atria Books has a great book for every reader.

This reading group guide for House on Endless Waters includes an introduction, discussion questions, ideas for enhancing your book club, and a Q&A with author Emuna Elon. The suggested questions are intended to help your reading group find new and interesting angles and topics for your discussion. We hope that these ideas will enrich your conversation and increase your enjoyment of the book.

At the behest of his agent, renowned author Yoel Blum reluctantly agrees to visit his birthplace of Amsterdam to promote his books, despite promising his late mother that he would never return to that city. While touring the Jewish Historical Museum with his wife, Yoel stumbles upon a looping reel of photos offering a glimpse of prewar Dutch Jewry, and is astonished to see the youthful face of his beloved mother staring back at him, posing with his father, his older sister . . . and an infant he doesn’t recognize.

This unsettling discovery launches him into a fervent search for the truth, shining a light on Amsterdam’s dark wartime history and the underground networks that hid Jewish children away from danger—but at a cost. The deeper into the past Yoel digs, the better he understands his mother’s silence, and the more urgent the question that has unconsciously haunted him for a lifetime—Who am I?—becomes. Evocative, insightful, and deeply resonant, House on Endless Waters is an unforgettable meditation on identity, belonging, and the inextricable nature of past and present.

1. Do you think Yoel is right to visit Amsterdam despite his mother telling him not to? Why or why not?

2. After Yoel and his wife, Bat-Ami, see the images in the museum of Yoel’s mother, he is plagued with questions. However, when he returns to his hotel room afterward, he doesn’t call his sister, Nettie, to tell her what he just discovered. Why is he so reluctant to tell Nettie what he learned?

3. We learn that Yoel was the only one who didn’t know about the other sibling. Why do you think his mother and sister kept this from him? Do you agree with their decision? Why or why not?

4. Yoel begins to contemplate all the relationships around him, including the one with his wife, daughters, and grandchildren. Why does the revelation about his mother instigate this? What does it say about the relationship we maintain with our mothers?

6. Do you agree with Yoel’s mother’s decision to isolate them from making friends and partaking in “the great human celebration”? Why or why not?

7. On page 60, it reads: “And he’s sure that great danger is hovering over him: that they, all the people passing by in the street right now, can see he’s a Jew and they’re determined to murder him.” Why does Yoel suddenly become paranoid about being Jewish in Amsterdam?

8. Yoel picks the smallest room in his hotel with a balcony. What purpose does this serve in his writing process?

9. When Sonia is first introduced, who do you think she is? How does your perspective change as you keep reading?

10. Does it make Sonia selfish when she says that “their life is complicated enough without being overburdened with what is going on in other places”? Why or why not?

12. Do you think Raphaels’s anger at his parents, biological and nonbiological alike, is justified or should he understand he was given away for his own safety? Why or why not?

13. What does the oak tree that Sonia notices growing horizontally in the park symbolize?

14. Sonia’s nursing friend Bett tells her about how she and her husband gave their child away but changed their mind. But by this time, the child could not be found. If you were in their shoes, would you give your child away, too?

15. Sonia expresses resentment toward Sebastian, a toddler, one day when she encounters Anouk with him on the stars at their house. What does it say about Sonia’s character to feel such animosity toward an innocent child? How does this make you feel?

1. Spend some time with Emuna Elon’s 2007 novel, If You Awaken Love, and see if you can discover any similar themes between the two books.

2. House on Endless Waters takes place in Amsterdam and has many scenes in the Jewish Historical Museum. Take a moment to do some research on the history of Jewish heritage in Amsterdam. You can start here: https://www.amsterdam.info/jewish/.

A Conversation with Emuna Elon

Why did you decide to write House on Endless Waters?

Actually, it’s not me who decides which story I am going to write. A new novel occurs to me when a specific character begins to gain control over my thoughts, followed by glimpses of images, phrases, and visions. Then I feel a powerful urge to start writing in order to find out what’s going on.

House on Endless Waters began with two characters: lonely, caged-within-himself Yoel on one side, and young vivacious Sonia on the other. At first I didn’t know if there was any connection between the two of them, but I sensed that there was a personal secret that Yoel needed to reveal. When I spent a few days in Amsterdam, which was initially just another beautiful city I enjoyed visiting, I was stunned to see the past—Yoel and Sonia’s past—come to life right before my eyes.

What sort of historical research informed the book?

My extensive research included reading books, articles, and other archival materials and watching filmed testimonies concerning Dutch history, Dutch Jewry, and Holland during World War Two. I also interviewed Dutch Holocaust survivors and children of survivors, trying to understand not only the historical facts but also their long-term implications. And I spent long periods of time in Amsterdam, taking in the sites and absorbing the atmosphere in which the story takes place.

As I worked on the story of Yoel’s stay in Amsterdam, alone in a shabby hotel overlooking the neighborhood, I too stayed alone in the exact same setting, and many of his daily experiences were derived from my own.

Did any of the research surprise you?

Many of my findings surprised me, especially since beforehand I was under the (mythical) impression that Jews in Holland met a comparatively “good fate” during the Holocaust.

I was especially astonished to learn about Holland’s hidden Jewish children, and to realize that many of their stories have remained murky and untold to this very day.

What inspired you to explore the mother-son relationship at the center of House on Endless Waters?

I think family ties are always fascinating, and mother-child relationships are one of the world’s greatest mysteries. I find myself drawn to this mystery in every story I read or write, and can’t say I have figured it out even now, when my own mother is no longer alive and I myself am the mother of six wonderful children who have already become six wonderful adults.

What motivated you to structure the novel as a story within a story?

Another reason for this structure was that Yoel Blum had to use his imagination in order to fill in the gaps of the story his sister told him. I knew that he had to be a storyteller, a writer, and that my novel would describe the writing process of his novel.

What was the most difficult aspect of writing this book?

I doubted my ability to tell a story from the perspective of a male protagonist, and I tried to switch to a female one but couldn’t bring myself to reject Yoel Blum’s plea that I write him. I felt a little more confident when my [Israeli] publisher promised me that the book would have a male editor, and I was more than relieved when that editor, professor of Hebrew literature Yigal Schwartz, gave Yoel’s thoughts and motions his unreserved approval.

Have you ever discovered anything shocking about your own family history?

When House on Endless Waters was published in Dutch (under the title Sonia’s Son), I met with an audience in Amsterdam and someone asked me: “If Yoel Blum is a writer, why did he ask you to write his story rather than do it himself?”

That was when I decided it was time for me to write my own family history, which is what I am working on right now. I don’t know if I will discover anything shocking, though I am already shocked by the mere realization of how little I know about the lives that yielded mine.

What are you hoping to leave your readers with?

I think my hopes are fulfilled when readers tell me that they feel as if this story is about them. We haven’t all been through the exact same experiences that Yoel or Sonia have, but just like them, each and every one of us walks alone in this world. Each one of us reaches out to be loved and understood. Each one of us craves belonging and searches for meaning.

I felt rewarded when a woman told me that reading this book helped her comprehend her mother’s behavior throughout the years; when a man said it gave him a new, more forgiving perspective of himself; and when a young mother confided that after she finished reading the book, with tears running down her cheeks, she went over to her child and gave him a big hug.

To Be Confirmed Atria

Praise for House on Endless Waters


“House on Endless Waters is extraordinary—a vibrant, page-turning family mystery that not only carries us deep into Amsterdam’s little-explored wartime history, but into the fascinating, complex and often painful process by which history is crafted into story.” —Jennifer Cody Epstein, internationally bestselling author of Wunderland and The Painter of Shanghai

“House on Endless Waters is a haunting and lyrical meditation on who we are and where we come from, on how our past shapes our present and our art. Emuna Elon’s gorgeously intricate novel is beautifully written and moving.” —Jillian Cantor, bestselling author of The Lost Letter and In Another Time

“Emuna Elon has given us an elegant, eloquent novel—a story in which time and language melt to reveal truths that could be told in no other way. House on Endless Waters is at once an Escher print of a tale and devastatingly, inescapably real.” —Rachel Kadish, bestselling author of The Weight of Ink

"I read this book in excitement and wonder. It's not only a touching and fascinating book, but a sophisticated one as well." —Amos Oz