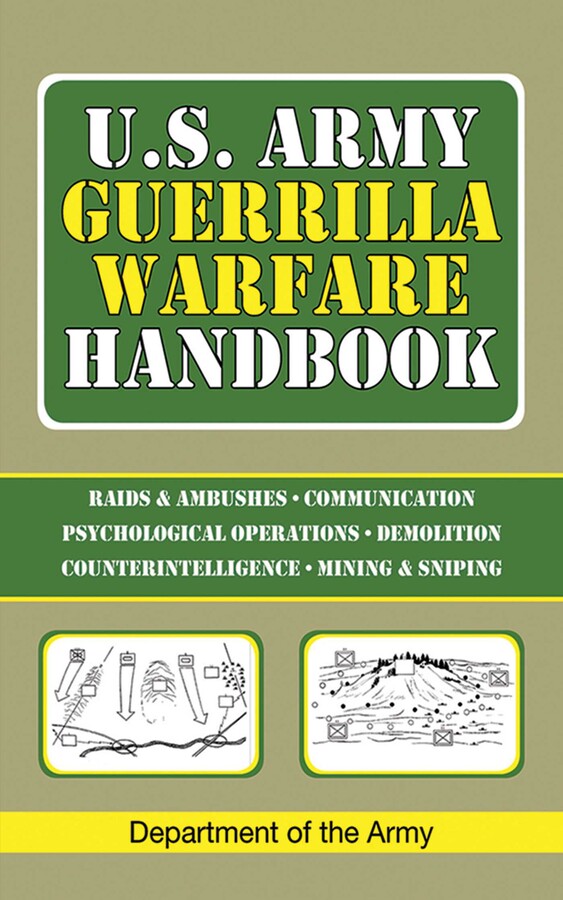 By Department of the Army
Published by Skyhorse
Distributed by Simon & Schuster
LIST PRICE $12.95
PRICE MAY VARY BY RETAILER

The official manual designed to provide guidance in special forces and unconventional warfare operations for commanders and staff at all levels.

They can be swift, silent, and deadly. That's why armed guerrillas are feared by even the largest, best-equipped fighting forces. No tank, rocket-propelled grenade, or infantry battalion can match the guerrilla team's ability to exact brutality with precision, instill fear in enemy hearts, and viciously deflate morale. From the snows of Korea to the jungles of Southeast Asia to the mountains of Afghanistan, the U.S. Army has employed guerrilla tactics to deadly effect. Those tactics and techniques, being used today by U.S. soldiers, are laid out in the U.S. Army Guerrilla Warfare Handbook. Topics covered include:

Employing small, heavily-armed, and well-oiled fire teams, guerrilla warfare has played an invaluable role in the success of nearly every U.S. campaign for decades. Here, its methods are detailed: raids and ambushes, demolition, counterintelligence, mining and sniping, psychological warfare, communications, and much more.

Here is an inside look at the guerrilla strategies and weapons that have come to be feared by enemies and respected by allies. Not another outside perspective or commentary on unconventional warfare, this is the original—of use to soldiers in the field and to anyone with an interest in military tactics.
Department of the Army

By Department of the Army
Published by Skyhorse
Distributed by Simon & Schuster
LIST PRICE $12.95
PRICE MAY VARY BY RETAILER