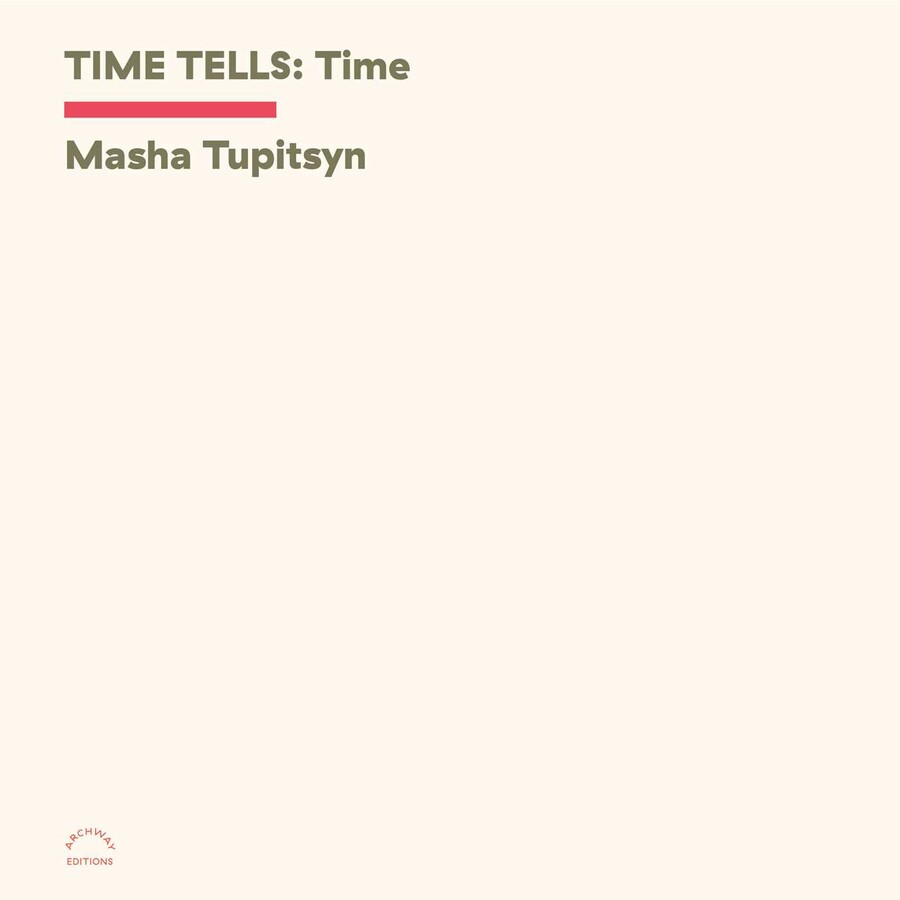 Zodiac, Felicity, the Beastie Boys and Call Me By Your Name - with touchstones like these Tupitsyn makes big, innovative critical thinking accessible to anyone interested in America today.

Time Tells: Time is the first installment in Masha Tupitsyn's grand, engaging cultural study of performance, time, masculinity and falsehood. Vertigo, Joan Didion, Ted Bundy, David Fincher and Jean Luc-Godard are touched on with the lightness of an enthusiast and the incisiveness of an expert. Tupitsyn takes the rarified world of critical theory and uses language and subjects that anyone can understand and enjoy. Her crisp, engaging prose draws connections between the arts and male pathology that can't be unseen, and the lively journey through pop culture will have you reaching for your remote.

MORE ABOUT THE TIME TELLS TRILOGY:

Archway Editions is proud to be publishing the Time Tells trilogy - a unique blend of history, memoir and philosophy - and this first volume is sure to draw in readers of any background. In 2022 the sequels Time Tells: Comedy and Time Tells: Acting will complete this epic cycle, one of the defining critical texts of the 21st century so far.

Weaving feminism, chronopolitics, prose, and cultural memoir, Time Tells meditates on the loss of presence, ethics, and attention in the post-internet age. Structured into three main inquiries and phenomenologies—Time, Comedy, Acting—Time Tells focuses on the internet to talk about the ethics of attention, comedy to talk about timing and the language of critique, and lying masculinity, the male double, and acting to talk about presence, performance, and the power of falsehood. All three phenomenologies intersect to examine our inability to experience coherence and integration in the post-truth era. Forming a multiform mosaic of serial essays that are intimate and diagnostic, elegiac and theoretical, Time Tells spans a wide variety of popular media--film, peak TV, comedy specials, and social media--resulting in a hybrid work of text and image.

“The first volume of Time Tells is a passionately cresting dispatch. A bittersweet treatise and cri de coeur that serves as both a critical corrective and meaningful demonstration of accumulation and assemblage in an age of endless End times. It provides much sought succor for someone like myself, who was minted in what this cultural critic calls “the last generation of memory” (1980s). Every encounter I have ever had with the warm-blooded thinker that is Masha Tupitsyn has been enlivening and has always given me much to mull, and this vibratory reading is no different. It has long been high time she was granted such an expansive platform as her unfolding trilogy promises.”

-Douglas A. Martin, Acker, Once You Go Back, and Outline of My Lover

“I really love Time Tells. It's important and wise and complex and poignant. With a rigorous attention to the assumptions and glitches built into the structures of film, technology, and the human experience of time, Masha Tupitsyn has not only created a form large and varied enough to contain time’s saddest and most terrifying questions, she has set them against each other for the post-digital age. What has happened to time? What has happened to memory? What has happened to faces, emotions, breathing? What are we seeing? What is being done to us? What are we doing to ourselves? What has happened to us? Where did we go? Playful and profound, meditative, and fully engaged with this breathless present, the first volume of Time Tells begins a crucial investigation into what we've lost, what we're still losing, and how to reimagine a contemporary experience of time.”

"In the tower of Babel that was 2020, one of the only shared sentiments was that something seriously fucked up happened to time. Reading Masha Tupitsyn's new book, I am convinced that what really happened in 2020 is everyone had to face the horror of existence stripped to the bare elements of what the 20th century dreamed up as our living 21st century nightmare. No one makes staring at a screen into a philosophical act quite like Tupitsyn, who has, for years, been telling us that we are creating a world where falling in love has become structurally impossible. And now, with the reconfiguration of life habits incited by the pandemic, we arrive finally ready to hear what she has to say. Tupitsyn, who in 2020, found herself walking around an abandoned NYC she thought could never exist again, found the time and energy to zero in on a vigorous excavation of how we arrived in this airless zone without before or after. In the midst of performing this virtuoso cognitive crisis, we receive, like a mid-pandemic phone call, a conversation with her very glamorous mother about what ever happened to the time of personal style, and the durational experience reunites with the 1:1 being of what, following Othello, Tupitsyn develops as the 'events in the womb of time which will be delivered.' Tupitsyn delivers, and I am in awe."

MASHA TUPITSYN is a writer, critic, and multi-media artist. She is the author of several books and films, such as Love Dog, LACONIA: 1,200 Tweets on Film, Beauty Talk & Monsters, Picture Cycle, and co-editor of the anthology Life As We Show It: Writing on Film. In 2015, she made the 24-hour film, Love Sounds, an audio-essay and history of love in English-speaking cinema, which concluded an immaterial trilogy that has been exhibited and screened in the United States, Canada, Europe, and Australia. Her new film, BULK COLLECTION (https://vimeo.com/493493423), is forthcoming in 2021. Her writing on film, culture, feminism, and art has appeared in numerous anthologies and journals such as Bookforum, Artforum, The Los Angeles Review of Books, The Believer, BOMB, LitHub, Fence, Frieze, The New Inquiry, The White Review, and The Rumpus. She has taught film and gender studies at various universities.