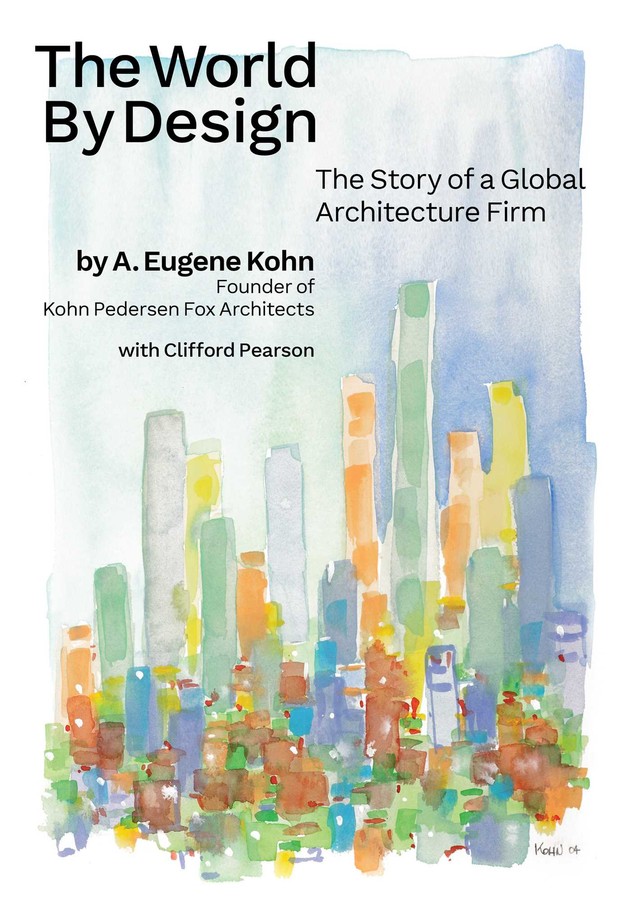 The World by Design

The Story of a Global Architecture Firm

By A. Eugene Kohn
With Cliff Pearson
LIST PRICE $34.99
PRICE MAY VARY BY RETAILER

In a series of fascinating tales, Gene Kohn explains how he helped build one of the most successful architecture firms in the world, offering inspiring lessons on business leadership and design innovation that can be applied to many fields.

Founded on July 4, 1976, Kohn Pedersen Fox quickly became a darling of the architectural press with groundbreaking buildings such as the headquarters for the American Broadcasting Company (ABC) on Manhattan’s Upper West Side, 333 Wacker Drive in Chicago, the Procter & Gamble headquarters in Cincinnati, and the World Bank Headquarters in Washington, DC.

By the early 1990s, when most architecture firms in the U.S. were struggling to survive a major recession, KPF was busy with significant buildings in London, Germany, Canada, Japan, Korea, and Indonesia—pioneering a model of global practice that has influenced architecture, design, and creative-services firms ever since. Like any other business, though, KPF has stumbled along the way and wrestled with crises. But through it all, it has remained innovative in a field that changes all the time and often favors the newest star on the horizon.

Now in its fifth decade, the firm has shaped skylines and cities around the world with iconic buildings such as the World Financial Center in Shanghai, Roppongi Hills in Tokyo, the International Commerce Centre in Hong Kong, the DZ Bank Tower in Frankfurt, the Heron Tower in London, and Hudson Yards in New York.

Forthright and engaging, Kohn examines both award-winning achievements and missteps in his 50-year career in architecture. In the process, he shows how his firm, KPF, has helped change the buildings and cities where we live, work, learn, and play.

A. Eugene Kohn is a founding partner and chairman of Kohn Pedersen Fox, one of the world’s top architecture firms. He is a senior lecturer at Harvard Business School and the Harvard Graduate School of Design and teaches at schools such as Yale, Penn, and Columbia.

“Great buildings give cities shape and character, and they inspire us to set our sights higher. This book pulls the curtain back on how they are brought to life.” —Michael R. Bloomberg, 108th mayor of New York City

“The World by Design is a must-read for all of those who love cities and the buildings and skylines that define them. It will encourage you to not only look up, but to think differently about our built environment and those who shape it.” —Stephen M. Ross, chairman and founder of The Related Companies

“In The World by Design, Gene Kohn captures the excitement and camaraderie of architecture as a team sport. The book takes us inside one of the world’s most significant architecture practices with a most congenial guide. It is essential reading for anyone interested in the business and culture of design.” —Frederick Steiner, dean of the University of Pennsylvania Stuart Weitzman School of Design

“Anyone who cares about the built environment should read The World By Design. Gene and his partners at KPF are defining the New York skyline with One Vanderbilt and this book provides fascinating insights into how they have built cities around the world.” —Marc Holliday, chairman and chief executive officer, SL Green Realty

The World by Design

The Story of a Global Architecture Firm

By A. Eugene Kohn
With Cliff Pearson
LIST PRICE $34.99
PRICE MAY VARY BY RETAILER