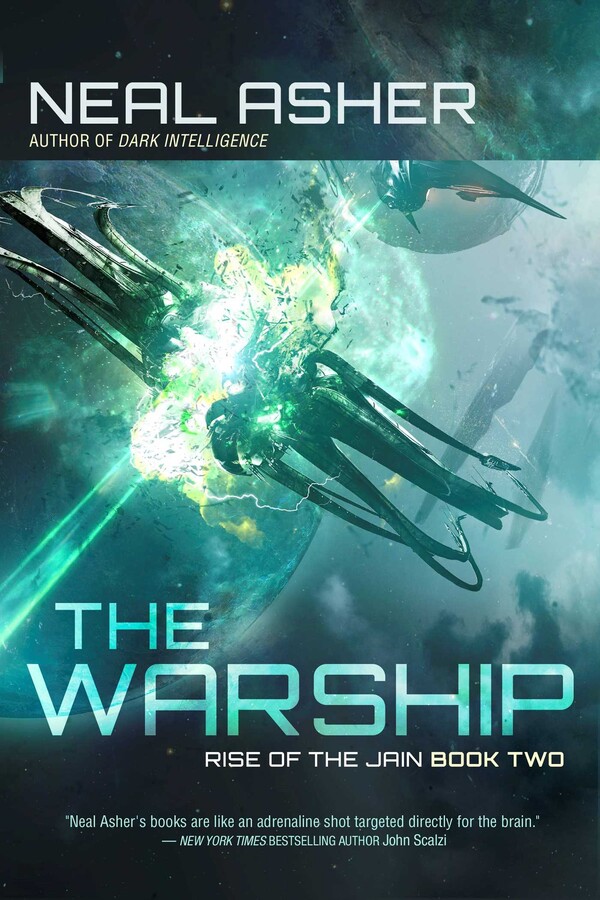 Rise of the Jain, Book Two

Book #2 of Rise of the Jain
By Neal Asher
LIST PRICE $15.99
PRICE MAY VARY BY RETAILER

One of The Verge’s 10 New Science Fiction and Fantasy Books to Check Out!

The dangers of ancient technology loom over the Polity in the sequel to The Soldier, Neal Asher’s latest action-packed space opera series.

The haiman Orlandine, charged with safeguarding lethal Jain tech swirling inside an accretion disc located in the distant reaches of space, has weaponized a black hole to eliminate the threat. But others are suspicious of her motives, and both the Polity AIs and the leaders of the alien prador kingdom dispatch fleets of warships in anticipation of conflict.

As the black hole continues to eat its way through the planets in the accretion disc, making its way towards a dead sun, it becomes clear the disc has been hiding a larger secret. Nefarious forces with ulterior motives have manipulated Orlandine into deploying the black hole, triggering a series of larger events that will uncover a danger far older than even the Polity itself.

From British science fiction writer Neal Asher, The War Ship picks up right where its predecessor, The Soldier, left off, showcasing Asher’s unique take on cutting-edge and fast-paced science fiction.

Praise for The Warship

“In this riveting sequel to The Soldier, Asher ramps up the pyrotechnicsin the thunderous first salvoes of war . . . while entwining the reader in twisty conundrums and misdirections. This is Asher at the top of his game and the field of military science fiction.”—Publishers Weekly, Starred Review

"Over the years I have returned to several comparisons when describing Asher’s work: Doc Smith (for space operatics), Olaf Stapledon (for vast galactic-historical sweep), Jacobean revenge tragedy (for grotesquery, melodrama, and gaudy violence), carnival thrill rides (for mere visceral excitement). All those apply here, and those titanic battle sequences suggest that I add the Marvel superhero franchise – thrill rides for the eyes – to the list. . . . but it’s also a lot smarter than those thrill-ride movies."—Locus, reviewed by Russell Letson

Praise for the Rise of the Jain Series

"The Soldier provides everything we demand from Asher: a beautifully complex universe where AIs, aliens and post-humans scheme and struggle—magnificently awesome. Then Asher turns it up to eleven."—Peter F. Hamilton

“I had thought with the Transformation trilogy (Dark Intelligence, War Factory, Infinity Engine) that Asher had maxed out what could be done with the Polity setting—that the near-metaphysical implications of the fate of Penny Royal constituted a kind of narrative event horizon. I think I might have been mistaken.”—Russell Letson, Locus

“In addition to elaborate space battles between gigantic warships and spectacular descriptions of technology, Asher excels at “humanizing” his intelligent machines.”—Booklist

“Asher is a modern master of sci-fi.” —Starburst magazine

“A wide-screen special-effects extravaganza, a space opera featuring gods and monsters . . . Doc Smith and Olaf Stapledon in a blender, turned up to eleven, with the contents splattering across the ceiling.”—Russell Letson, Locus

“Hardboiled, fast-paced space opera . . . Asher’s books are similar to the world of Iain M. Banks’ Culture universe, but the Polity is arguably a much darker and more vicious environment—and all the better for it.” —The Register

Rise of the Jain, Book Two

Book #2 of Rise of the Jain
By Neal Asher
LIST PRICE $15.99
PRICE MAY VARY BY RETAILER

More books in this series: Rise of the Jain