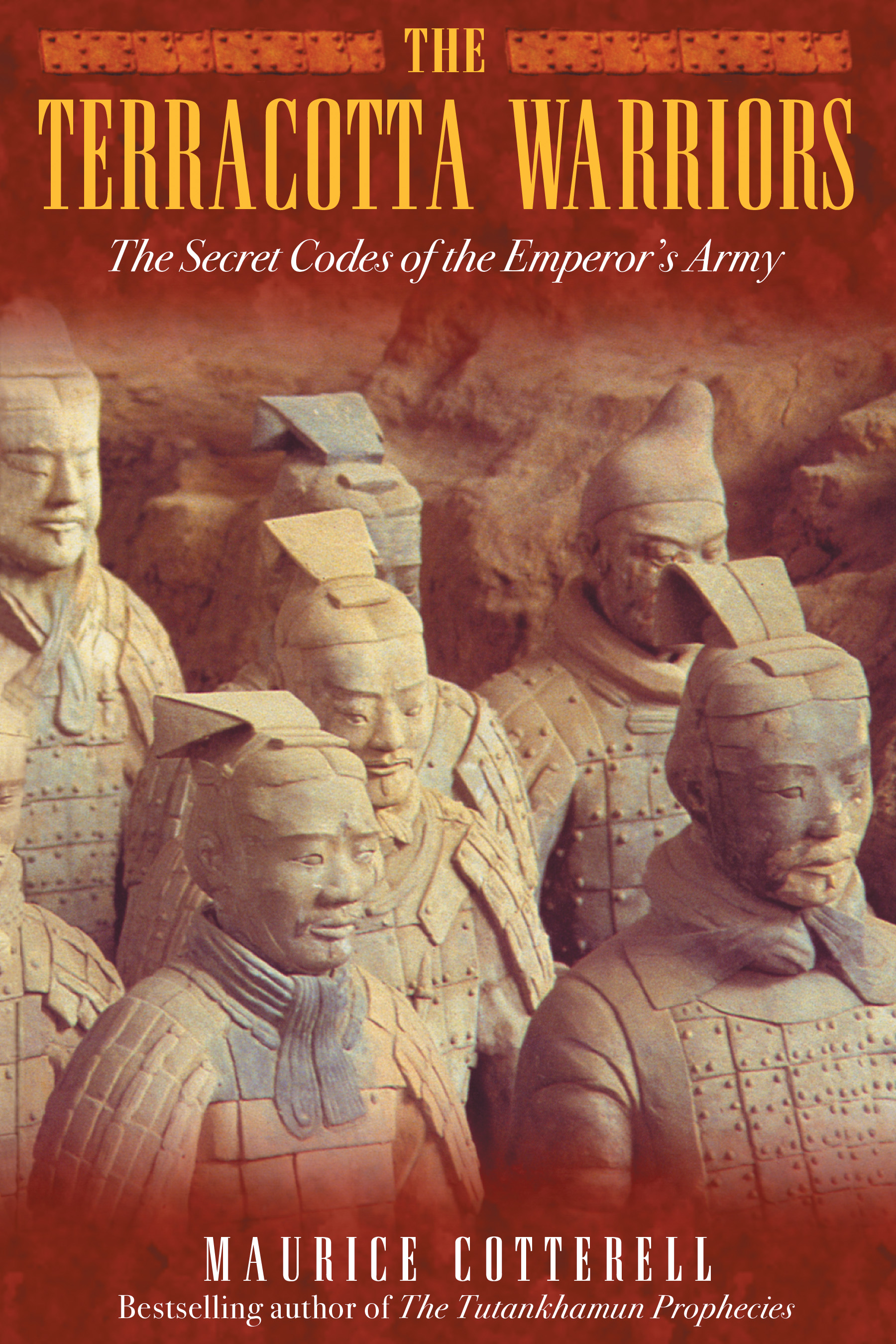 By Maurice Cotterell
LIST PRICE $25.00
PRICE MAY VARY BY RETAILER

• Decodes the farewell message of the first emperor of China concealed more than 2,000 years ago in the 8,000 terracotta warriors that guard his tomb

• Shows the spiritual principles of this sacred solar science and its remarkable insights into heaven, hell, and the immortality of the soul

When the first emperor of unified China, Ch’in Shi Huangdi, felt his death approaching, he decreed that he be entombed within a pyramid and that his tomb be protected by an immortal army of terracotta soldiers. In 1974 archaeologists discovered the first of more than 8,000 life-size terracotta warriors, each weighing half a ton, buried circa 220 B.C.E. near this emperor’s pyramid tomb. Maurice Cotterell shows how Shi Huangdi--like the pharaoh Tutankhamun, the Mayan lord Pacal, and Viracocha in Peru--was a keeper of the sacred solar science of the ancients, a science that included a sophisticated understanding of the effect of the sun on earthly affairs, fertility rates, and personality. The keepers of this science taught that the soul was immortal and was destined to transform into star energy or be reborn on Earth, depending on an individual’s spiritual progress in his or her lifetime. Using his unique understanding of how and why ancient civilizations encoded this extraordinary knowledge, Cotterell decodes the emperor’s farewell message concealed in the terracotta warriors--a message that reveals the true purpose of life and the imperishable nature of the soul.

The Secret Army of the First Emperor

The Potter’s field
That cold crisp day, in the spring of 1974, is one the people of Lintong province will never forget. For a brief split second the vaporised breath of three young farmers was all that remained of the men who, moments earlier, had toiled together.

It seemed that the field, three kilometres (two miles) from Xiyang, had swallowed them up, together with the drill, the tripod and several wooden buckets that were to provide--once they had recovered from the shock of the fall--a means of escape.

They had tumbled into an ancient passageway, which collapsed around them, sending clouds of dust billowing high into the sky above. As it cleared, they found themselves surrounded by an army of warriors in full battledress; a life-size army of terracotta soldiers that gazed, expressionless, at the unexpected intruders.

Within hours, archaeologists from the nearby town of Yanzhai arrived to seal the site from prying eyes.

Archaeologists were surprised to find that the shapes of the faces (taken together with the shape of the head and the hairstyle) of the 8,000 or so soldiers corresponded to just ten shapes of the 10,516 character Chinese alphabet. These were: ryh, jiah, your, shen, yuung, jih, muh, fehng, tiarn and guor. Curiously, although the official site record from Xian provides the names of the characters, archaeologists never explained their meaning. Perhaps it never occurred to them to enquire what each of the characters stood for. Or perhaps they knew, and preferred not to say. In any event, they hastily reburied the soldiers they had excavated and concealed the test holes.

Nobody was allowed near the site for almost two years, when excavation recommenced, although the authorities never said why. To this day the official site guide refuses to give the meaning of the ten Chinese characters.

It’s hard to see the reason for the secrecy. After all, Chinese-English dictionaries are freely available throughout the Western world. One of the most well known is that of the author Lin Yutang: Lin Yutang’s Chinese-English Dictionary of Modern Usage.

The character shen, the monkey, is the ninth character in the Chinese astrological zodiac (the 12-year duodecimal [2 + 10] cycle). The Mayan Prophecies, The Supergods, The Tutankhamun Prophecies and The Lost Tomb of Viracocha each explained that 9 is the highest number that can be reached before becoming one (10) with God. Because of this, ancient sun-worshipping civilisations used the number to represent God, and the number 999 to represent a Supergod, a spiritual teacher (the opposite of 666, the number of the beast in Revelation, in the Bible).

Chinese mythology tells the story of the monkey; how he had to complete 81 tasks (9 x 9) before he could get to heaven. From this we can infer that the character shen, the monkey, number 9, refers to God.

The Secret Message of the Ten Face Shapes
Bringing the dictionary definitions of the ten characters, as given by the ten face shapes, we thus have:

Focus the eye on the soldiers in the covered tunnels. Read the meaning of the national (Chinese) characters differently; use the mind to conjure (understand) the story which spans from the beginning of time until now; a story about the sun and God.

Or, put another way:

Look at the soldiers in the tunnels carefully and decode the secret story of the sun and God, from the beginning of time until now.

The Pits and the Warriors
First, the footprint of the pit (the ground plan showing the extent and limits of the intended excavation from the green field site) was marked out with pegs in the field. Then the tunnels were excavated. The ground in each tunnel was tamped firm using the sawn end of logs before baked quarry tiles were laid to the floor. Ends of trenches were framed with timber jambs and lintels.

The warriors, each weighing around half a tonne, were ostensibly carried by horse and cart from the kilns several kilometres distant. There they were manoeuvered down the steeply sloping trench access ramps into formation arrangement. This account, though, suggests a formidable feat of engineering. When my own life-size terracotta warrior arrived from the museum shop in Xian, getting it to the house from the car proved a logistical headache. It took three men five hours to shift the single kneeling archer over the 100-metre (328-foot) journey. The exercise required the laying of two parallel sawn and planed timbers in front of the soldier. The planks were soaked with water to minimise friction. The figure was then rocked from side to side, corner to corner, along the lines of timber to its final resting place inside the house.

This at least illustrated the practical difficulties that must have faced those who stocked the tunnels, except that their task was at least 8,000 times more difficult and the distance between the kiln and the tunnels many kilometres over difficult terrain rather than my own short journey over grass. The rocking of my archer, from corner to corner, also proved perilous, with one of the corners of the base snapping off at the first attempt. This in itself was also revealing, because it drew attention, incredulously, to the rear corner of the base of the archer where one of the corners was deliberately missing. Incredulously because ancient civilisations used the same method--omission of pieces--to draw attention to the fact that a particular artifact concealed secret information (see Appendix 3, xix).

With the troop formations in position, the tunnels were covered with pine logs and a layer of plaster powder scattered on top. Woven hessian type matting covered the plaster, which subsequently hardened with the ingress of moisture . . .
Maurice Cotterell

"Cotterell's ability to relate science to religion. . . will provide the reader with plenty of food for thought."

"With a wealth of in-depth reserach, data and analysis, Cotterell presents a truly compelling theory that could make a believer out of even the most ignorant or skeptical reader."

By Maurice Cotterell
LIST PRICE $25.00
PRICE MAY VARY BY RETAILER