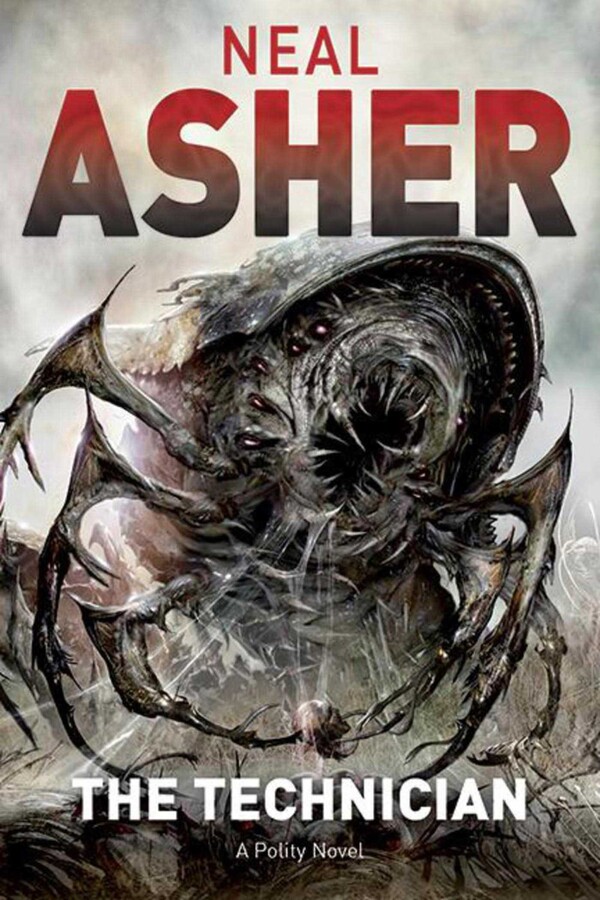 
This space opera is set in the well-designed Polity universe with a rich backstory. Now available in the US, The Technician will delight old and new fans with Asher’s grand, complex, and dark story.

The Theocracy died 20 years ago, and the Polity rules on Masada. But there is a group of rebels, called the Tidy Squad, who cannot accept the new order. They hate the surviving theocrats, and the iconic Jeremiah Tombs is at the top of their hit list.

After breaking out of his sanatorium, Tombs is pushed into painful confrontations with all that he has avoided since the rebellion. Many years ago, an almost mythical hooder called the Technician attacked him and did something to his mind. Tombs’s insanity needs to be cured, because he might have knowledge about the suicide of an entire alien race. The war drone Amistad, who has the task of bringing this information to light, recruits Leif Grant, a former rebel Commander, to protects tombs. Penny Royal and Chanter are recruited as well. Meanwhile, far off in deep space, the device that Atheter used to reduce them animals awakens and begins to power its weapons.

Skyhorse Publishing, under our Night Shade and Talos imprints, is proud to publish a broad range of titles for readers interested in science fiction (space opera, time travel, hard SF, alien invasion, near-future dystopia), fantasy (grimdark, sword and sorcery, contemporary urban fantasy, steampunk, alternative history), and horror (zombies, vampires, and the occult and supernatural), and much more. While not every title we publish becomes a New York Times bestseller, a national bestseller, or a Hugo or Nebula award-winner, we are committed to publishing quality books from a diverse group of authors.
Neal Asher