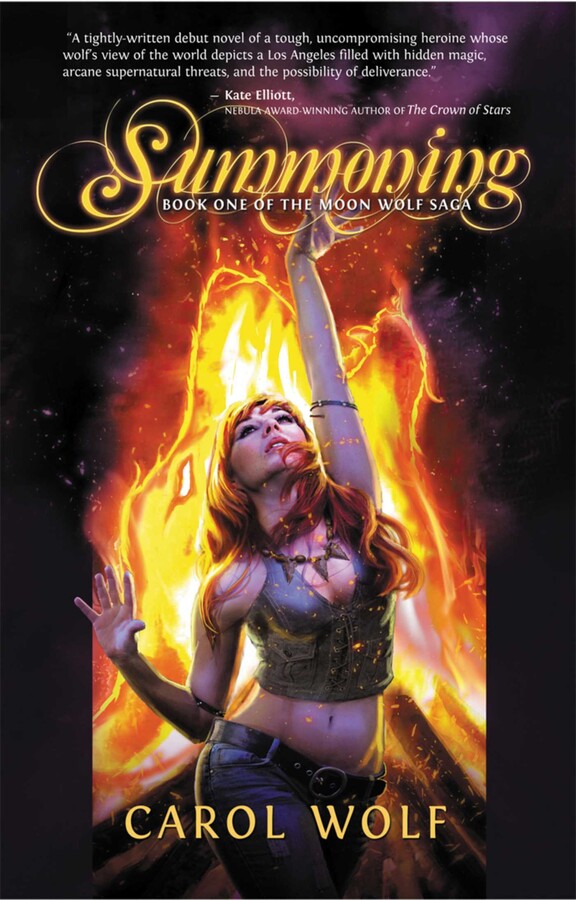 Book One of the Moon Wolf Saga

By Carol Wolf
LIST PRICE $14.99
PRICE MAY VARY BY RETAILER

The World Snake is coming, devourer of Thrace and Atlantis and the only one standing in its way is Amber, a sixteen-year-old runaway, recently arrived in Los Angeles.

Amber is more than just a girl with a stolen ID and an attitude; she is a daughter of the wolf-kind, a shapeshifter able to change forms at will. One night, as Amber prowls the Hollywood Hills in wolf form, she stumbles onto an occult ceremony, interrupting the ritual. As a result, Amber finds herself the unwilling mistress of a handsome demonic servant, Richard. Appearing as a fair youth of eighteen years, Richard is a demon accidentally summoned, then captured, by Dr. John Dee, court magician to Queen Elizabeth I. Richard has been trying for four centuries to free himself from a succession of masters and mistresses, but finds himself bound to Amber, the only one who can protect him from his greatest fear, the herald of the World Snake, the Eater of Souls. But all hell is about to break loose, and Amber and Richard are going to need some allies to stop the Eater of Souls and avert the World Snake, and the battle has only begun.

From Carol Wolf comes the urban fantasy debut The Summoning, a novel of a wolf girl, a demon boy, and a city on the edge of disaster.

Book One of the Moon Wolf Saga

By Carol Wolf
LIST PRICE $14.99
PRICE MAY VARY BY RETAILER