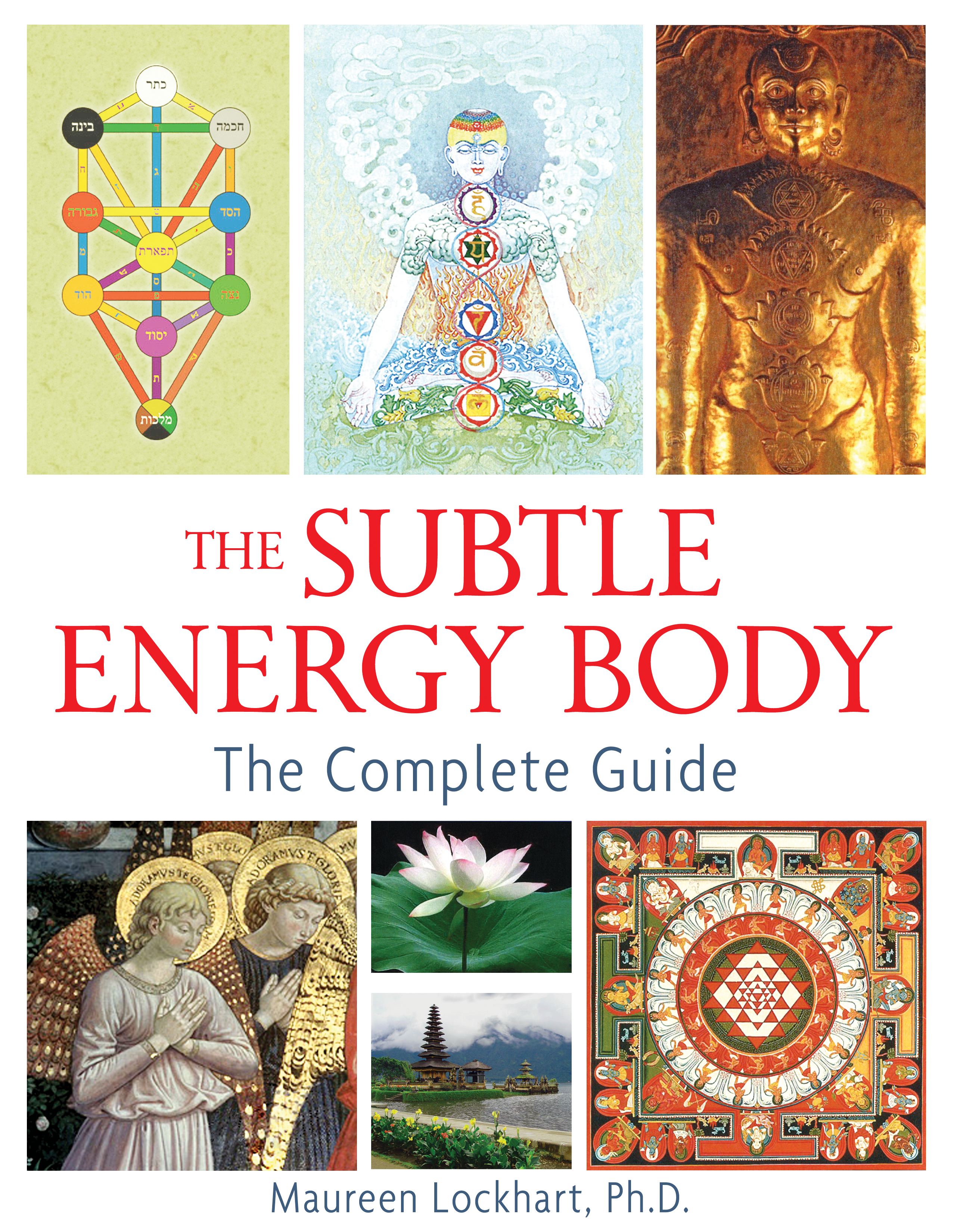 By Maureen Lockhart
LIST PRICE $29.95
PRICE MAY VARY BY RETAILER

• Explains the nature, purpose, and functions of the subtle body

• Explores the role of the subtle body in such traditions as Alchemy, Ayurveda, Tantra, Qi Gong, and Yoga

Ancient traditions of both the East and West have long maintained that the human being is a complex of material and nonmaterial systems, or energy bodies. The “subtle body” is an energetic, psychospiritual entity of several layers of increasing subtlety and metaphysical significance through which the aspirant seeks knowledge of the self and the nature of God. In many traditions, the component parts of the subtle body serve as a map of the different levels of consciousness.

The practices and disciplines that evolved from an awareness and understanding of the subtle body, and how the material and nonmaterial work together, form a coherent system of psychospiritual transformation that is central to numerous and extremely diverse spiritual practices--including those of the Gnostics, Sufis, Native Americans, Vedic seers, Chinese, and Greeks. The subtle body plays an essential part in more recent traditions such as Anthroposophy and Gurdjieff’s Fourth Way and the cutting-edge science of Ervin Laszlo’s research into the Akashic field. But the benefits of understanding the role of the subtle energy body are not confined solely to the spiritual plane. The energetic bodies provide a coherent system of life-affirming principles and practices for the diagnosis and treatment of the whole person that is not only part of many traditional healing systems, such as Acupuncture and Ayurveda, but also is forming the basis for a synthesis of traditional and contemporary healing practices that could lay the foundation for the medicine of the future.

The hidden dimension of macrocosmic existence, of the universe at large, has its precise parallel in the microcosm of the human body-mind. The “deep structures” of the body share in the “deep structures” of its larger environment. All esoteric traditions assume that there is a correspondence between inner and outer reality.
--Georg Feuerstein

Man is conceived in Indian thought as being at the midpoint of, and therefore as the microcosm for, all of creation, according to David Gordon White. The human being lies midway between the lower creatures, plants and nonliving matter (the tamasic) on the one hand, and the divine hierarchies and subtle beings (the sattvic) on the other. But, more important than this, man is seen, at least since the time of the Upanishads, as possessing an individual soul or spirit (atmān), which is a microcosm for the universal Brahmān, Purusha, and so forth. Just as Brahmān is the hub of the cosmic round of creation, the Meru axis of the universe, so man’s atmān is at the center of his body.

In both Eastern and Western traditions introspection revealed distinct levels of being within the physical body’s position in the world; these levels came to be thought of as the “subtle body,” existing at least approximately co-temporally and co-spatially with the visible, gross body. “Correspondences” were conceived between this microcosm and the macrocosm within which the gross-and-subtle body-system had its life, its movement, and its very being. In this chapter we shall explore the microcosm and macrocosm in Eastern traditions, but show first that the two broad historical developments of East and West share common ground and symbols, in particular the Tree of Life.

Common to almost all religious thought was a belief that in some sense each person stood at the center of a world that extended upward into the beyond. At least the lower part of that upward extension was what we now call the “subtle body,” apparently nonmaterial but perhaps not wholly consubstantial with the highest Being. Both mountains and trees were pressed into service as symbols for the concepts that arose. Mountains rose toward the heavens; trees had their roots in the earth but grew up into the air. Of course, the adherents of the various beliefs acknowledged the inadequacy of the resulting symbols. The symbolic Mount Meru was one of these central axes of being, and here is one of its representations.

It is essential to realize that Meru was not some impersonal map reading but a vital force that became interchangeably identical with the Tree of Life and the Cosmic Lotus, and constituted the supreme organizing principle of Indian religious symbolism. “Mount Meru became much more than a feature on the cosmographic map. A map is a misleading metaphor for a map is two-dimensional. Meru rose up in a third dimension; in doing so, it pierced the heavens; in piercing the heavens, it transcended time as well as space; in transcending time it became . . . a magical tool for the rupture of plane. This is evident in the many layers of symbolism that exchange Meru for the Cosmic Man, for the temple at the centre of the universe, for the office of kingship, for the stupa, for the mandala, and for the internal ascent undertaken by the tantric mystic. Meru is not, we must recognise, a place, ‘out there’, so to speak. It is ‘in here’.”

Along with the concept of an axis-mountain around which visible and invisible heavens turned, tree-symbolisms also arose. Once the (wooden) wheel had been invented a tree was also the axle around which the wheel turned. We still use the term axle-tree. Trees also showed a seasonal and cyclical growth, loss, and regrowth of leaves, so multiplex symbolisms arose naturally in a prescientific and proto-technological world.

In the Judaeo-Christian traditions the Tree of Life (or Tree of the Lives) is mentioned in Genesis, the first book of the compilation known as the Bible. The Tree of Life is standing in the Garden of Eden together with the Tree of the Knowledge of Good and Evil, and it appears again in Revelation, also known as The Apocalypse, the last Book of the Bible. Man’s awakening consciousness provided metaphors that seemed to be handed down by God as our means of reunion with him, perhaps the briefest possible description of what “religion” is, and a concept that is clearly relevant to any analysis of what our subtle body might be and what, above that subtle body, is to be distinguished as proper to the Great Being alone. The question of where a line could be drawn between terrestrial being and heavenly being puzzled many thinkers. Some thought there was no such distinction. Others thought it unbridgeable and absolute. In Genesis, we are told that Adam, having shown the hubris of eating of the Tree of the Knowledge of Good and Evil and so having become “as one of us,” the Elohim decided to expel him and Eve from the Garden of Eden “lest he put forth his hand and eat of the Tree of the Life and live for ever.” Outside the Garden man would have to “till the ground in the sweat of his face” until he died and “returned to the earth from whence he was taken” for “dust thou art, and unto dust thou shalt return”--a materialistic, physicalistic view that many have felt there is sound reason to reject. The naïveté of conflations of mountains, trees, the male (and female) organs, and the apparent rotation of the sky each day, on the one hand, with meditational awareness of pure being and of a Higher Being, on the other, give no ground to reject the evidence from meditation or its many corroborations from medicine and science. The paradigm of the Integral Body is new, but it expresses a long-sought wholeness in humankind’s understanding of itself.
Maureen Lockhart

Maureen Lockhart, Ph.D., is a lecturer and tutor at the University of Wales, Lampeter. She was a homeopath, naturopath, and yoga teacher in India and the Far East for two decades and coauthored, with M. Gharote, The Art of Survival: A Guide to Yoga Therapy.

“Traditional and contemporary non-Western cultures have well known that the physical body is just one aspect, or layer, of the bodies we all possess. Maureen Lockhart shows the multifold--physical, metaphysical, social, individual, and health and healing--implications of our subtle body and makes us open our mind and spirit to this vital aspect of our being and existence. The Subtle Energy Body is a book to read and to ponder--and to wake up with.”

– Ervin Laszlo, author of The Akashic Experience and founder and president of the Club of Budapest

“Dr. Lockhart is an experienced practitioner of complementary therapies that have their roots in ancient Eastern medical and mystical practices--one holistic entity in the East! Here she writes an account of the concept of the subtle body with its interpretation in Indian and Chinese traditions. Highly recommended!”

– Dr. Howard A. Jones, author of The Thoughtful Guide to God and The Tao of Holism

“The Subtle Energy Body makes a great resource for those that are already attuned their own energy body but more importantly it's for those that are seeking that "something" that is missing in their lives. Lockhart provides a gateway, you provide the body.”

“In this large book Eastern and Western traditions in esoteric cosmology are drawn together. As the title indicates it is all about the Subtle Energy Body . . . This should please both sides of the aisle and perhaps even crate a meeting of those diametrically opposed minds. Wouldn’t that be lovely?”

“This book has retained a place of prominence for me, as a source not only of reverence and reference, but also provocation and insight, valuable gifts that Lockhart brings with subtlety and generosity.”

By Maureen Lockhart
LIST PRICE $29.95
PRICE MAY VARY BY RETAILER