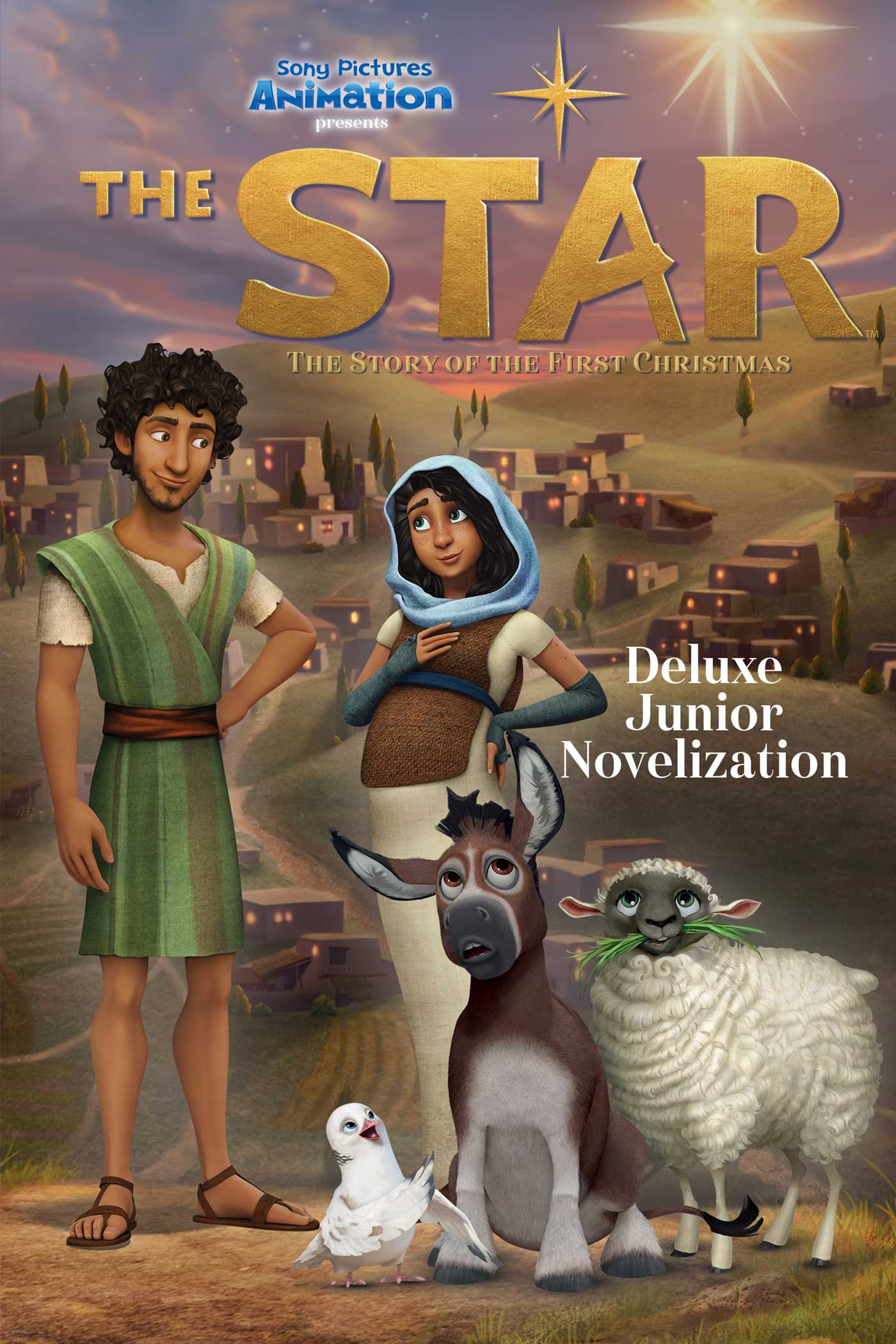 Part of The Star Movie
Adapted by Tracey West
LIST PRICE $9.99
PRICE MAY VARY BY RETAILER

A small but brave donkey and his animal friends become the heroes of the first Christmas in this beautiful animated holiday movie from Sony Pictures.

Discover the story of the first Christmas in a whole new way as a fun cast of animals retells the nativity story from their own point of view! Children and adults alike will fall in love with this charming story that’s sure to become a holiday classic!

In Sony Pictures Animation’s The Star, a small but brave donkey named Bo yearns for a life beyond his daily grind at the village mill. One day he finds the courage to break free, and finally goes on the adventure of his dreams. On his journey he teams up with Ruth, a loveable sheep who has lost her flock, and Dave a dove with lofty aspirations. Along with three wisecracking camels and some eccentric stable animals, Bo and his new friends follow the Star and become accidental heroes in the greatest story ever told—the first Christmas.

The Star Junior Novelization Chapter One An Angel Appears
A long time ago—nine months B.C.—a tiny rodent scurried through the dusty streets of Nazareth. The rodent’s name was Abby, and she was very hungry.

There was nothing much to eat in the desert. But Abby knew the city was filled with humans, and where there were humans, she could find food. She hopped on the back of a traveling cart and stayed out of sight during the bumpy ride through the city gates.

When the cart reached a busy street, Abby hopped off. She scampered to the top of a stone building and sniffed the air. The smell of freshly baked bread reached her nose.

Abby jumped off the building and landed on the back of a woman on the road. The woman let out a scream and swatted at Abby with her broom. The little rodent quickly ran off, following the smell.

She stopped in front of a small house. She’d found it! She climbed through the window and spotted a young woman pulling a loaf of bread out of the stone oven.

The woman had long, brown hair and kind, dark eyes. She put the bread on the table and folded her hands in front of her. She closed her eyes and whispered a soft prayer of thanks for the food.

Abby saw her chance. She quickly grabbed the loaf of bread and began to drag it away. Then, suddenly, she found she couldn’t move.

She looked behind her and saw the woman looking down at her. The woman’s finger was planted in the bread. Abby froze.

“Don’t think I don’t see you, little one,” the woman said.

Abby bolted and hid behind a pot. She shivered as the woman walked near her, towering above her.

But the woman didn’t hurt Abby. She tore off a chunk of bread and put it on the floor next to Abby.

“I think there’s enough for both of us,” she said with a kind smile.

Suspicious, Abby slowly approached the bread. The woman closed her eyes and returned to her prayer. Abby grabbed the bread and quickly stuffed a piece into her mouth.

She was enjoying her meal when the sound of rumbling thunder distracted her. A rush of wind blew through the room, and a shadow fell across everything.

Then a voice spoke. It was a voice that didn’t sound like any human Abby had ever heard.

The woman, Mary, looked at Abby. “Was that you?” she asked, but the little rodent shook her head.

Hundreds of candlelike flames appeared in the room, descending from the ceiling. Mary stood up, wide-eyed.

Abby stared at the lights too. She didn’t know how she knew, but she knew what she was looking at—an angel.

“Fear not,” the angel told Mary, “for you have been favored by God to receive and bear a son.”

Abby dropped the bread she was eating and stared at the angel, stunned.

“The Holy Spirit will overshadow you and the child will be called the Son of God,” the angel replied. “For nothing is impossible with God.”

The lights began to swirl together, forming a wave. The wave of light wrapped around Mary, and then shot out the window with the speed of a comet.

Abby and Mary both ran to the window. A brand new star glittered brightly in the sky.

Tears of joy filled Mary’s eyes. Abby looked down at the morsel of bread in her paw. She tossed it away. Then she hopped outside.

“Guys! Guys!” she cried, running through the streets of Nazareth. “You’re not gonna believe this!”

Part of The Star Movie
Adapted by Tracey West
LIST PRICE $9.99
PRICE MAY VARY BY RETAILER

More books in this series: The Star Movie