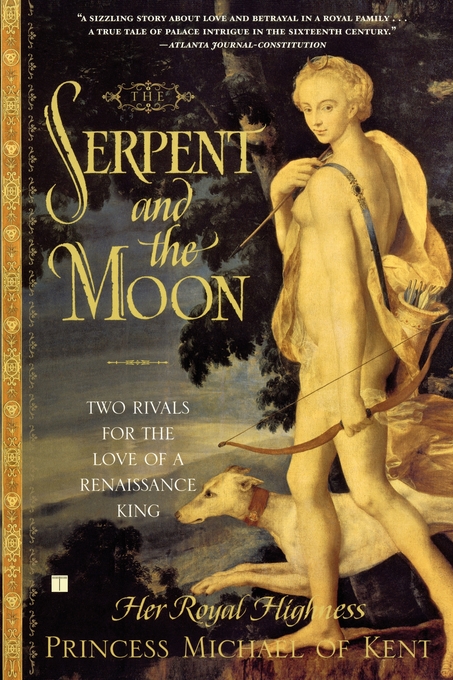 The Serpent and the Moon

Two Rivals for the Love of a Renaissance King

By Her Royal Highness Princess Michael of Kent
LIST PRICE $25.99
PRICE MAY VARY BY RETAILER

Set against the stunning backdrop of Renaissance France, The Serpent and the Moon is a true story of love, war, intrigue, betrayal, and persecution. At its heart is one of the world's greatest love stories: the lifelong devotion of King Henri II of France to Diane de Poitiers, a beautiful aristocrat who was nineteen years older than her lover.
At age fourteen, Henri was married to fourteen-year-old Catherine de' Medici, an unattractive but extremely wealthy heiress who was to bring half of Italy to France as her dowry. When Catherine met Henri on her wedding day, she fell instantly in love, but Henri could see no one but the beautiful Diane. When Henri eventually became king, he and Diane ruled France as one. Meanwhile, Catherine took as her secret motto the words "Hate and Wait" and lived for the day Diane would die and she could win Henri's love and rule by his side. Fate had another plan.
Her Royal Highness Princess Michael of Kent, herself a descendant of both Catherine and Diane, imbues this seldom-told story with an insider's grasp of royal life. The Serpent and the Moon is a fascinating love story as well as a richly woven history of an extraordinary time.

Reader's Group Guide The Serpent and the Moon
1 ) What are the main purposes for marriage in the book and throughout much of history? What is the general view of adultery during the reign of Francois I? What about illegitimacy? Why do you think these attitudes and customs were adopted?
2) Louis de Savoie was a major player in her son Francois' court. Describe her character and personality. What are her main motivations? How did her choices steer the course of history?
3) What were Charles de Bourbon's main reasons for treason? Do you think Charles de Bourbon's decisions to go against Francois I and France were justified?
4) Compare the treasonous acts of both Jehan de Saint-Vallier and Charles de Bourbon. Is one better or worse than the other? Does the king view both acts of treason with the same judgments? Does the author?
5) Francois' decision to send his eldest sons into Spanish captivity is both interesting and revealing. Why does he make this decision? What does this and his subsequent behaviors, both personal and political, say about his character as both king and father?
6) What were the main changes that took place in the French court after Francois I death and the beginning of Henri II's reign? What ruling sensibilities did father and son share? How did they most differ?
7) Describe Catherine de Medici's personality. How is she viewed within the court? The author uses the term "hate and wait" in describing her. Is this an accurate portrayal? How does her personality change throughout, especially after Henri's death? What is your overall opinion of Catherine de Medici?
8) Describe the main aspects of the relationship between Henri and Diane de Poitiers. What affect did their obvious affections have within the court? What character traits of each of the "three in a marriage" are most revealed through this precarious situation?
9) Describe the various ways in which Diane de Poitiers assumed a higher status over Catherine the Queen. How is Anet symbolic of this status? Is Diane de Poitiers merely benefiting from the fortunate circumstances of her time or is her success intentional?
10) What is the state of affairs in regards to heresy in France at the time Henri II's reign? How does Diane de Poitier influence the King's decisions in matters of heresy? As with Francois I, there are contradictions between the monarch's appreciation and support for humanism and their actions against accused heretics. Discuss these contradictions. How does the incident of the tailor (page 277) embody these contradictions?
11) What is Diane de Poitiers fate? Were the events that followed Henri's death expected or surprising? What is your overall opinion of Diane de Poitiers? 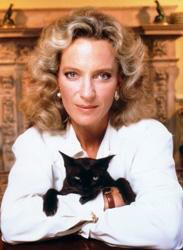 Her Royal Highness Princess Michael of Kent is the author of two previous books, Crowned in a Far Country: Portraits of Eight Royal Brides and Cupid and the King: Five Royal Paramours. For more than ten years, the Princess has pursued a successful career lecturing on historical topics. She lives with her husband, Prince Michael of Kent, in Kensington Palace in London and in their seventeenth-century manor house in Gloucestershire, England.

"A sizzling story about love and betrayal in a royal family...a true tale of palace intrigue in the sixteenth century."
-- Atlanta Journal-Constitution

"The author, who knows a thing or two about palace intrigue herself, writes with style and panache and serves up marvelous details of pageantry, court fashion, furniture, and gossip worthy of the master of the genre, the duc de Saint-Simon."
-- Dominick Dunne

The Serpent and the Moon

Two Rivals for the Love of a Renaissance King

By Her Royal Highness Princess Michael of Kent
LIST PRICE $25.99
PRICE MAY VARY BY RETAILER

More books from this author: Her Royal Highness Princess Michael of Kent