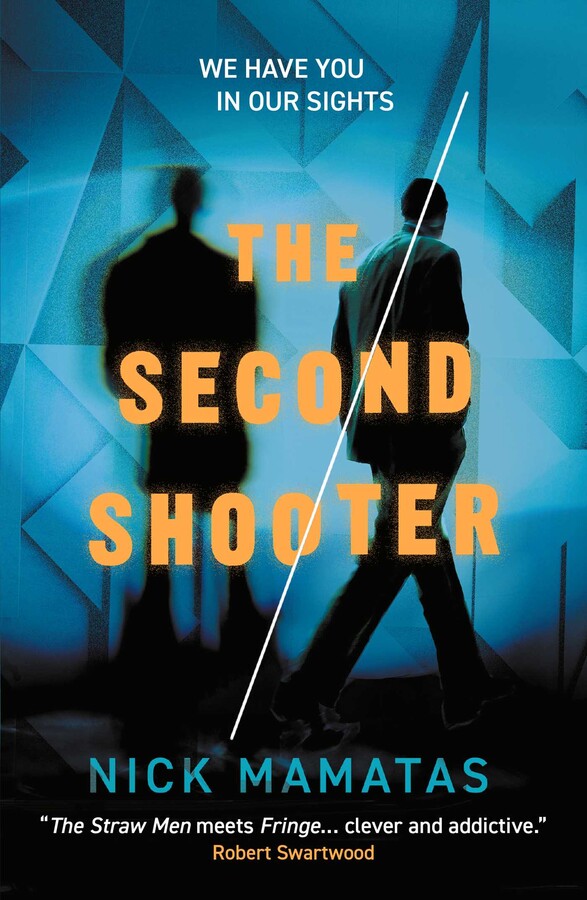 A perception-twisting scifi thriller by a critically acclaimed author.

Sometimes, the truth is weirder than the conspiracy theories.

In the first reports of every mass shooting, there’s always mention of a second shooter—two sets of gunshots, a figure seen fleeing the scene—and they always seem to evaporate as events are pieced together.

Commissioned by a fringe publisher to investigate the phenomenon, journalist Mike Karras finds himself tailed by drones, attacked by a talk radio host, badgered by his all-knowing (and maybe all-powerful) editor, and teaming up with an immigrant family of conspiracy buffs.

Together, they uncover something larger and stranger than anyone could imagine—a technomystical plot to ‘murder America.’

Time for Karras to meet his deadline.

Nick Mamatas is the author of several novels, including Move Under Ground, I Am Providence and Sabbath. His short fiction has appeared in Best American Mystery Stories, Year's Best Science Fiction and Fantasy, Tor.com, and dozens of other venues. Much of the last decade's short fiction was recently collected in The People's Republic of Everything. Nick is also an editor and anthologist: he co-edited the Bram Stoker Award-winning Haunted Legends with Ellen Datlow, the Locus Award nominees The Future is Japanese and Hanzai Japan with Masumi Washington, and the hybrid fiction/cocktail title Mixed Up with Molly Tanzer. His short fiction, non-fiction, novels, and editorial work have variously been nominated for the Hugo, Shirley Jackson, Stoker, and World Fantasy Awards. Nick currently lives in Oakland, California.

“Mamatas writes in a witty, sassy style that invigorates his narrative.” -- Publishers Weekly

“Among the best... Mamatas plays fair with the mystery elements, the stakes keep rising, and it all builds toward a satisfying conclusion.” -- Locus Magazine

“A brilliant, brutal and highly entertaining thriller." -- Cara Hoffman, author of So Much Pretty and RUIN

"The Second Shooter is a magic trick of a book, where it seems like every turn of the page blasts you off into an entirely unexpected direction—and yet, Mamatas keeps you rooted with great characters and a maddeningly relevant plot. Most authors could not pull this off, and he makes it look easy." -- Rob Hart, author of The Warehouse

"One of the best conspiracy thrillers I've read in a long time. Think Michael Marshall's The Straw Men meets Fringe but highly original in its own way. Clever and addictive, The Second Shooter will have you reading late into the night — and looking for mysterious drones in the sky the next time you're outside." -- Robert Swartwood, USA Today bestselling author of The Serial Killer's Wife

"Nick Mamatas' The Second Shooter is a brilliantly original and very funny commentary on modern American life. It's Lethem meets Amis, in a journey into paranoia about the corrupt and byzantine machines that made us tick." -- Sarah Langan, author of Good Neighbors

"Nick Mamatas has looked, probably more closely than is strictly good for him, at the paranoid landscape of conspiracy theory, and has come up with a novel that manages the difficult trick of being both deeply disturbing and very funny. I liked it a lot." -- Dave Hutchinson, author of Europe in Autumn

"The Second Shooter is a sublime, clever and humorous dive into the murky waters of human perception and existence in a USA where nothing is real anymore." -- Starburst

"An entertaining thriller, amusing and disturbing by turns in its depiction of contemporary American obsessions." -- The Guardian

"The ideal reader is someone who really liked both Twin Peaks and The X-Files, and getting stoned while watching both of them. God knows there's a Venn diagram somewhere for that and I hope the book finds its people as cult novels eventually do." -- Silvia Moreno-Garcia