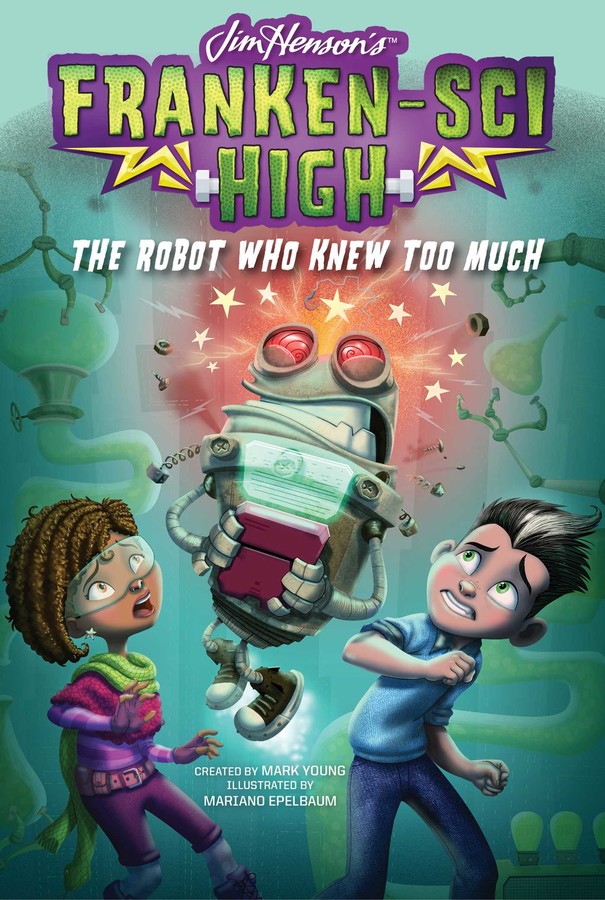 The Robot Who Knew Too Much

The fun continues at Franken-Sci High in this third book in a wacky series created with The Jim Henson Company.

Franken-Sci High is the only school in the world for aspiring mad scientists and it’s located on a craggy island in the Bermuda Triangle, of course! While some mad scientists are power-hungry maniacs, the school was founded in 1536 as a refuge for generations of brilliant—and sometimes eccentric—young minds. Students are encouraged to use their brainpower for good, but the teachers accept that some kids will want to take over the world…and the school cafeteria.

When his robot friend, Theremin Rozika, aces a test that he was really nervous about, Newton Warp is surprised to see that his friend looks sad instead of happy. Theremin’s father programmed him to never be smarter than his dear old dad: If Theremin begins to do well in one area of study, he immediately fails every other subject. So Newton and his friend Shelly Ravenholt attempt to reprogram Theremin, with disastrous results. Instead of making Theremin smarter, they accidentally make him speak in Pig Latin! They’re forced to contact Theremin’s father, Dr. Rozika, to repair their friend’s code. Can they also convince him to give Theremin the freedom to succeed?

Chapter 1: The Future Is Funky

CHAPTER 1 The Future Is Funky
A lot of strange things had happened to Newton Warp since the day he’d appeared at Franken-Sci High with no memories at all.

That was the first strange thing—not knowing who he was. He had a student ID that said his name was Newton Warp and that he was a student at the school. But that’s all he knew. And nobody at the school could tell him who he was, not even the professors or the headmistress, Ms. Mumtaz.

The other strange things had happened very quickly, one after another. He met his roommate, who was a talking mound of green goo. His best friends were a robot, and a girl who rescued monsters. Then Newton discovered that he had some unusual powers, such as sticky fingers and toes, and the ability to camouflage himself.

Other strange things had happened too, but at the moment, Newton was thinking that what had just happened was really, truly bizarre and confusing. His friend Shelly Ravenholt, the monster rescuer, was thinking the same thing.

They were standing in the school gym, facing Professor Flubitus, a green-haired man wearing a polka-dot shirt, shiny black pants, yellow boots, a vest with blinking LED lights, and a red bow tie.

It wasn’t just his outfit that was strange, but what he’d told them. He had said that he had traveled all the way from the future to protect Newton and Shelly.

“Your future,” he specified. “I’m afraid it’s not looking so good.”

Newton and Shelly stood there with their mouths open for a few long seconds. Then Higgy, Newton’s gooey roommate (he was made of protoplasm, actually), spoke up.

“How not good do you mean?” he asked. “Not good, like how eating a sandwich with stale crusts is not good? Or how movies with talking babies are not good? Or more of a funky not good, like really stinky cheese?”

Professor Flubitus frowned. “Far worse than funky, I am afraid,” he said.

Newton finally spoke. “Mumtaz told us that you were following us around to protect us. Protect us from what?” he asked, his voice rising. “What is going to happen?”

“I’m afraid I can’t tell you that,” Flubitus said, his face turning as red as his bow tie. “If I did that, it might alter the future. That’s one of the first rules of time travel, you know.”

Shelly snapped out of her stunned trance. “Who’s making these rules, exactly?” she asked.

Then they heard Ms. Mumtaz’s voice behind them.

“Flubitus, what’s going on here?” she asked. “What happened to the monster?”

The monster—that was another strange thing that had happened recently. During a family reunion, Shelly had helped out a small blue creature called a Transylvanian baccatrei. The grateful monster, Peewee, had followed Shelly to the school without her knowing it. Professor Flubitus had found Peewee trying to get into the school, and had brought him inside.

Before Flubitus could return the creature to Shelly, Peewee had eaten a nanochip that had transformed him into a giant, three-eyed, fire-breathing monster with spikes on his head. Professor Flubitus had deactivated the chip and returned Peewee to his normal state. But he was no hero as far as Newton was concerned. Because Flubitus had confessed that the nanochip had been intended for Newton! 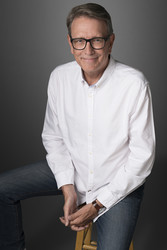 In the “real” world Mark Young makes a living as a multiple Emmy winner who has written and produced the animated TV shows for Netflix, Disney, Nick Jr., ABC, CBS, and NBC. However, in his “inner” world, Mark believes that Franken-Sci High isn’t actually his creation but a real school where budding mad scientists learn how to create synthetic eyeballs, travel to different dimensions, try gravity gum, and design inflatable pets. Mark lives in Southern California with his wife. Between them, they have four amazing kids. More about Mark at MarkYoung.co.

Mariano Epelbaum is an illustrator and character designer form Buenos Aires. He enjoys trying different styles of illustration, as he is inspired by each project he works on. Mariano worked as art director and character designer on the animated movie Underdogs. He has published books in the US, Spain, Argentina, and Puerto Rico. When he’s not working, he likes playing with his two daughters, watching movies, and going for outdoor walks. Visit him online at Mariano.ArtStation.com.

The Robot Who Knew Too Much