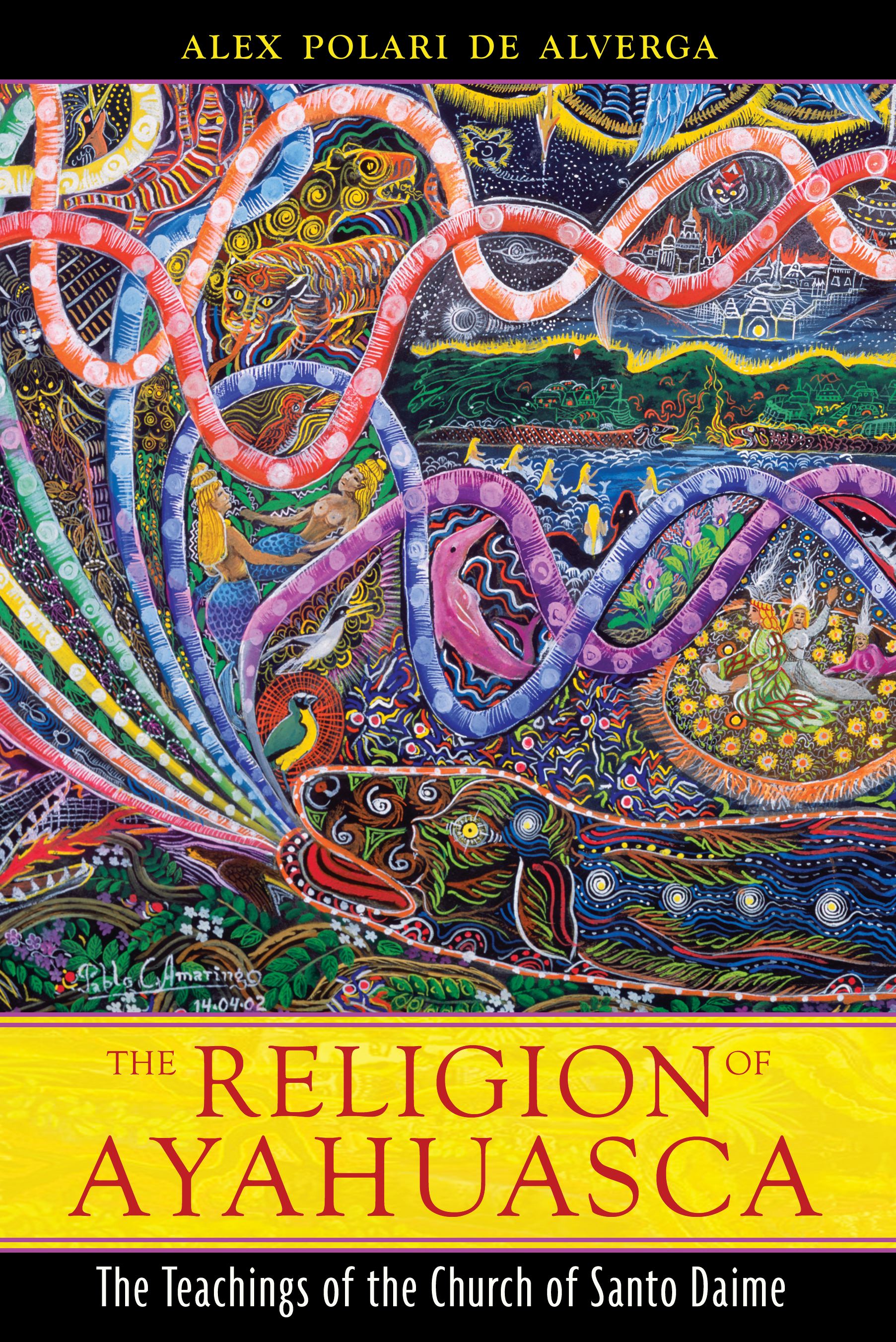 • An intimate account of the genesis of the Santo Daime tradition

• Edited and introduced by Stephen Larsen, author of The Shaman’s Doorway

In search of something to restore his spiritual connection to life after his release from captivity as a political prisoner in Brazil, Alex Polari de Alverga had a transformative encounter with Padrinho Sebastiao Mota de Mela, one of the two revered founders of Santo Daime. A potent synthesis of Christianity and indigenous Amazonian practices of entheogen use, mediumship, and healing, the Santo Daime church provided Alverga with an alternative to his disillusionment with modern society. His quest for spiritual initiation eventually led him deep into the heart of the rain forest to Mapiá, one of the spiritual centers of Santo Daime, where he became a teacher and leader of the Daime community.

The Religion of Ayahuasca is a story of a classic spiritual encounter comparable to the Tibetan Saint Milarepa’s search for his teacher Marpa. It is also an intimate account of the genesis of an important religious tradition from its modest beginnings in Brazil to its growth throughout the world, offering an inside look at the spiritually centered village of Mapiá--a model for communities in the 21st century--and at the religious leader who helped create it. Providing insight into the spiritual path the Daime offers, Alverga’s tale reveals the new depths of Being made available through the sacred use of ayahuasca.

The Prophet of the Amazon

I was so enveloped by good omens that I did not remember any of the other reasons that took me to Rio do Ouro. The encounter with Padrinho was brief but significant. He answered doubts that for a long time I did not know how to formulate to myself. By and by, back to my consciousness would come the fact that I was in the middle of the forest, a member of an interdisciplinary commission that came to study, and maybe even also to decide, the future of a drink and a doctrine I had only moments ago accepted when I asked Padrinho for his blessing.

I was surprised sometimes by the feeling of a weight in my heart because the whole situation with the research and validation of the Daime was bringing me guilt for communing with God in such a way, for feeling that the divine experience was in some way being artificially induced. Suspicion about “hallucinations,” visions artificially induced, was the main component of old misconceptions. But a new era is dawning in which prejudice can no longer hold back the truth. Nevertheless, a confrontation is in the air and we were the witnesses being called to testify about this new form of consciousness. This is our first great spiritual battle: to affirm our faith in what we had seen with our eyes and felt with our hearts; to testify to the divine character of an experience that is difficult to frame in any formal and preconceived logic; and to hope that fallible human logic does not once again take God’s witnesses and throw them to the lions.

This same question was moving the government, the modern secular power of our time, about the origins and goals of the Santo Daime, a group achieving communion with God through a drink obtained from a vine and a leaf. To a certain degree the preoccupation was justified because this spiritual phenomenon was as yet unknown to many. And that the religious sacrament is obtained through the mixing of two psychoactive plants stimulates much prejudice. Initiation with Divine plants, a native tradition of the most ancient people of the Americas, should not be confused with the indiscriminate use of drugs and the economic interests that guide this terrible industry, a significant wound of our modern civilization at the end of this millennium.

As Padrinho captured so precisely, the visit of this Confen commission had a special meaning. It was an encounter of national and local governments with a holy people who came from far away, a spiritual community with an ancient legacy, coexisting today in harmony in Brazil. It is not without meaning that many contemporary authors talk about the great spiritual role of our country, also called the land of the Southern Cross, where, as it is said, Christ and his phalanx descended and consecrated the ground of its forest as being the appropriate place for his so long awaited return.

Sometimes I walked through the woods meditating on the mysteries of these plants that cause us to enter into contact with a being so wise and sublime, with power as deep as it is benevolent, to the point that our hearts dare to have the certainty to call it faith and our understanding translates this state as being the presence of Christ inhabiting our interior. I am this! I would whisper to myself and, as I had studied Eastern religions, unconsciously repeat an old Vedic mantra to myself.

Many times, the great negative power present in doubt ambushed my still-oscillating mind. Padrinho often warned us, “Be careful with the two thieves at the side of the crucified Christ. They are doubt and fear, the ones who steal our consciousness and take us from our certainty.” They were also the ones that disturbed my walks, taking on the role of the Devil’s advocates. Doubt and fear whispered in my ears: “Surely you are mad! How can you believe that you are as He is? And what if it was a mirage?”

I was following this being that I felt present in the Daime, even without fully understanding him. One of the hymns that Padrinho Sebastião loved to sing states:

I live in the forest
And I have my teachings
I do not call myself Daime
I am a Divine Being.

By and by, this knowledge was percolating into me. When I drank the Daime for the first time, the great church hall of Colônia 5,000 transmuted in front of my eyes into an ancestral celebration. I felt part of a mystery, the memory of which was being rescued from the mist of the collective human unconsciousness. At the dawn of the great Hindu civilization, our ancestors used the juice of a plant called Soma. It was offered in a ritual form three times in a row, part being offered to the fire and part consumed by priests. Dozens of hymns belonging to the Rig Veda, one of the oldest and most respected religious scriptures, talked about the inebriant power of the sacramental drink dedicated to the god Indra in special rites and occasions. Many researchers associated the cult with Amanita muscaria siberiana, a mushroom that has a consciousness-expanding active principle, but others point to Peganum harmala, a plant that has as one of its components the same active principle of the vine Banisteriopis caapi.

Could it be that Daime is the same Soma reappeared at the twilight of the gods, at the moment when Siegrifierd played the trumpets ending the old Nordic and Arian mythologies and inaugurating a new era of Juramidam, the Divine Being that inhabits the telluric forests of the new world? What does it matter in what form or class of being the Divine Avatars manifest to man and woman? Did Vishnu not come as a turtle, fish, and bird? The Logos, the Divine Verb manifested, adopted in Christ a human form, so why not as a plant?
Alex Polari de Alverga

Alex Polari de Alverga spent years as a political prisoner during the rule of the military junta in Brazil, enduring torture, brutality, and deprivation. On his release from captivity, he encountered the Santo Daime religion and is currently a padrinho (spiritual father) in the spiritual community of Mapiá.

“There are detailed, carefully written descriptions of the spiritual process and the precision with which Alverga has woven these threads through various perspectives and conceptual frameworks is fascinating.”

“Who better to tell the story of ayahuasca (Diplopterys cabrerana) than de Alverga? His intellectual and practical work bridges the worlds of scholars and Amazonian people. After years of being held as a political prisoner during the reign of Brazil’s military junta, he encountered the Santo Daime religion–a unique form of christianity blended with traditional Amazonian use of mediumship and ayahuasca for healing and spiritual growth. The book relates the personal experiences key figures and of the author’s as he evolves into a Santo Daime leader.”