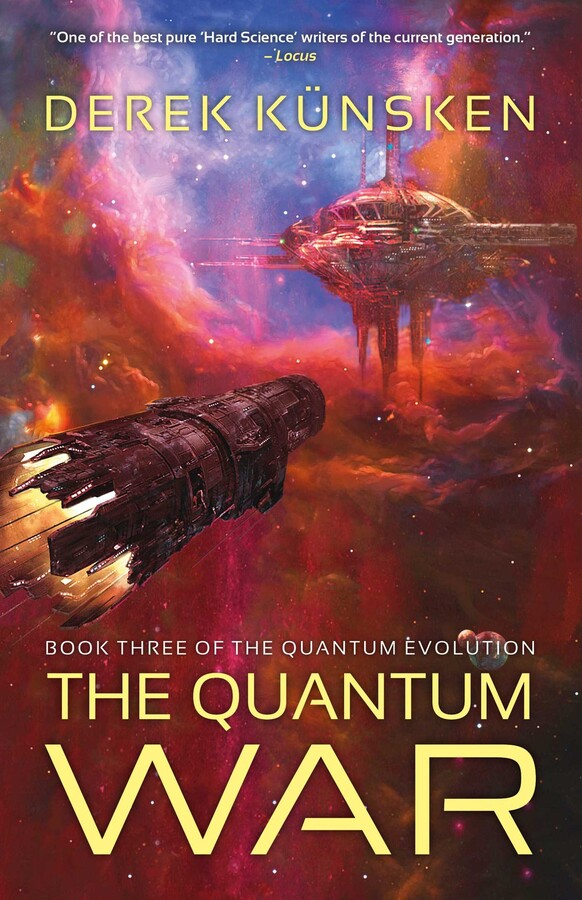 The eagerly awaited third volume in the number one bestselling Quantum Evolution series. An all-new, ground-breaking, action-packed new science fiction adventure set in the universe of The Quantum Magician and The Quantum Garden.

The Union-Congregate war rages onward and the Union’s premier fighter pilots, the Homo Eridanus, start encountering deadly resistance from strange pilots on the Congregate side. Among wreckage, they find that new Congregate pilots aren’t human, but Homo quantus, with strange wiring and AI connections.

At the same time, the Puppets come to the Union with offers of an alliance for a dangerous price: the rescue of the geneticist Antonio Del Casal who is a captive at Venus, with over a hundred Homo quantus.

The only one who might be able to break through the Congregate defences at Venus is a con man who has given up his profession.

Derek Künsken has built genetically engineered viruses, worked with street children and refugees in Latin America, served as a Canadian diplomat, and, most importantly, taught his son about super-heroes and science. His short fiction has appeared in Analog Science Fiction and Fact, Beneath Ceaseless Skies and multiple times in Asimov’s Science Fiction. His stories have been adapted into audio podcasts, reprinted in various Year’s Best anthologies, and translated into multiple languages. They have also been short-listed for various awards, and won the Asimov’s Readers’ Award in 2013

“An audacious con job, scintillating future technology, and meditations on the nature of fractured humanity.”

“Künsken has a wonderfully ingenious imagination.” -

“I have no problems raving about this book. A truly wild backdrop of space-opera with wormholes, big space-fleet conflict and empires.... What could go wrong?” -- Brad K. Horner

“This brainy sci-fi heist novel uses mathematics like magic to pull you through a caper worthy of Jean-Pierre Melville.”

– The B&N SciFi and Fantasy Blog on Quantum Magician

“The Quantum Magician is the type of book you go back to the beginning and read again once you know how everything pans out and have those ‘why didn’t I see that the first time?’ moments.”

“The Quantum Magician is a space adventure built on the scaffolding of a classic con job movie (think The Italian Job or Ocean’s Eleven). It hits all the right beats at the right time, and part of the fun in reading it is wondering: what will go wrong? Who will betray who? What will be the reversals? When done well, as in the case of The Quantum Magician, it’s a delight to read.”

– The Ottawa Review of Books on Quantum Magician

“The Quantum Magician feels like what would happen if Locke Lamora landed in Bank’s Culture, and if Locke had a lot to say about depraved humans. And I do love me a con artist story! Also? The writing is brilliant, the pacing is damn near perfect, the dialog is fun and snarky, the characters are great, I couldn’t put this book down!”

“Con games and heists are always hard to write – one like this, which comes out pitch perfect, wrapped in a nuanced and striking sci-fi narrative is, to say the least, a rarity.”

“The Quantum Magician is a fabulous debut, it would make the most fantastic movie. It has everything and more, it seriously needs to be read by way more people. Highly, highly recommended.”

"Awesomely intersectional and packed full of French swear words, The House of Styx is a great scientific adventure!"

"Künsken’s vivid worldbuilding is a knockout... This is a must-read."

– Publishers Weekly, starred review on The House of Styx

"The House Of Styx is a stunning new sci-fi family drama that admirably shoulders the burden of two heavy genres and distills them into an exhilarating and heart-breaking journey of discovery."

– SciFiNow, 5 star review on The House of Styx