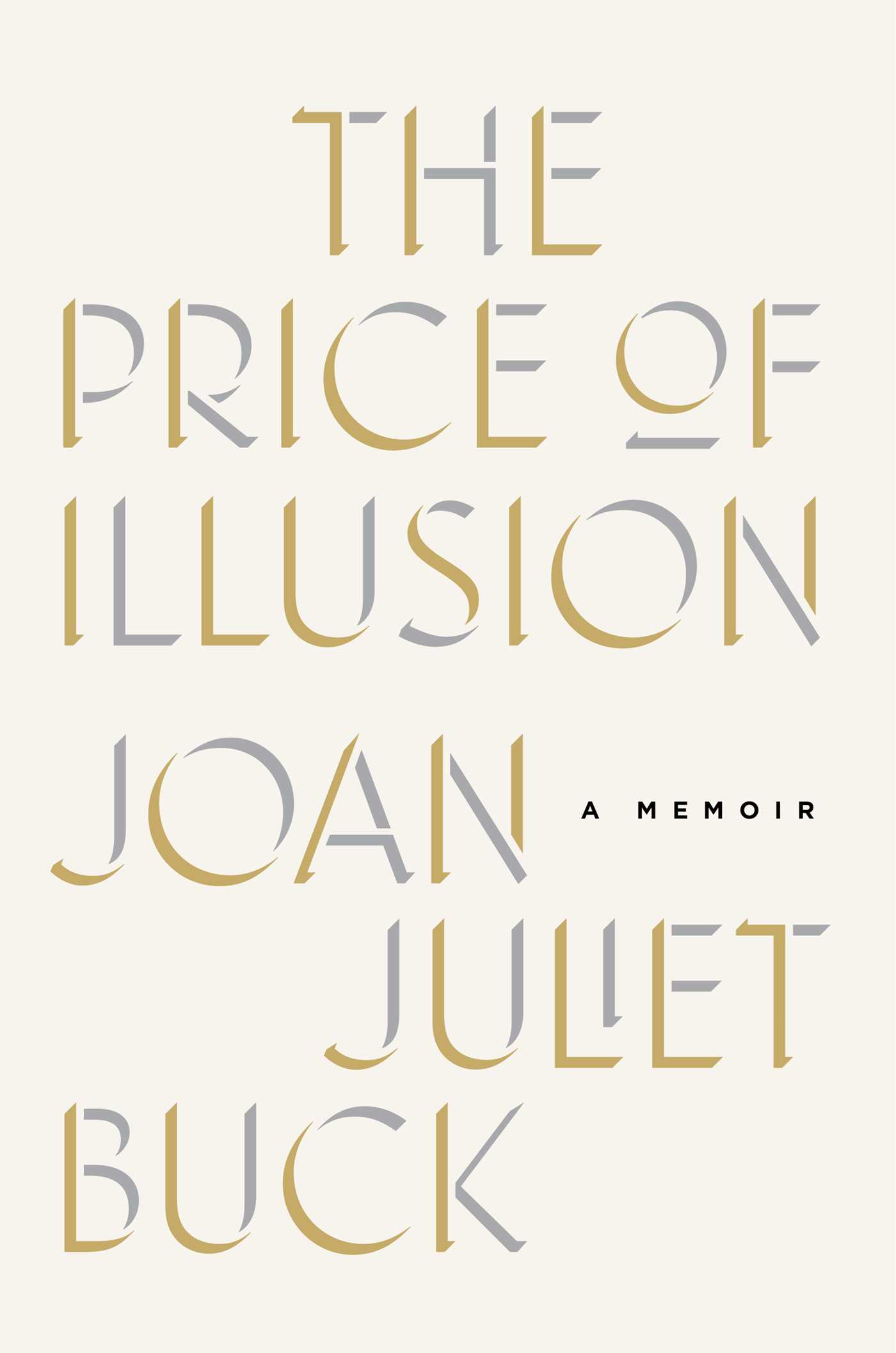 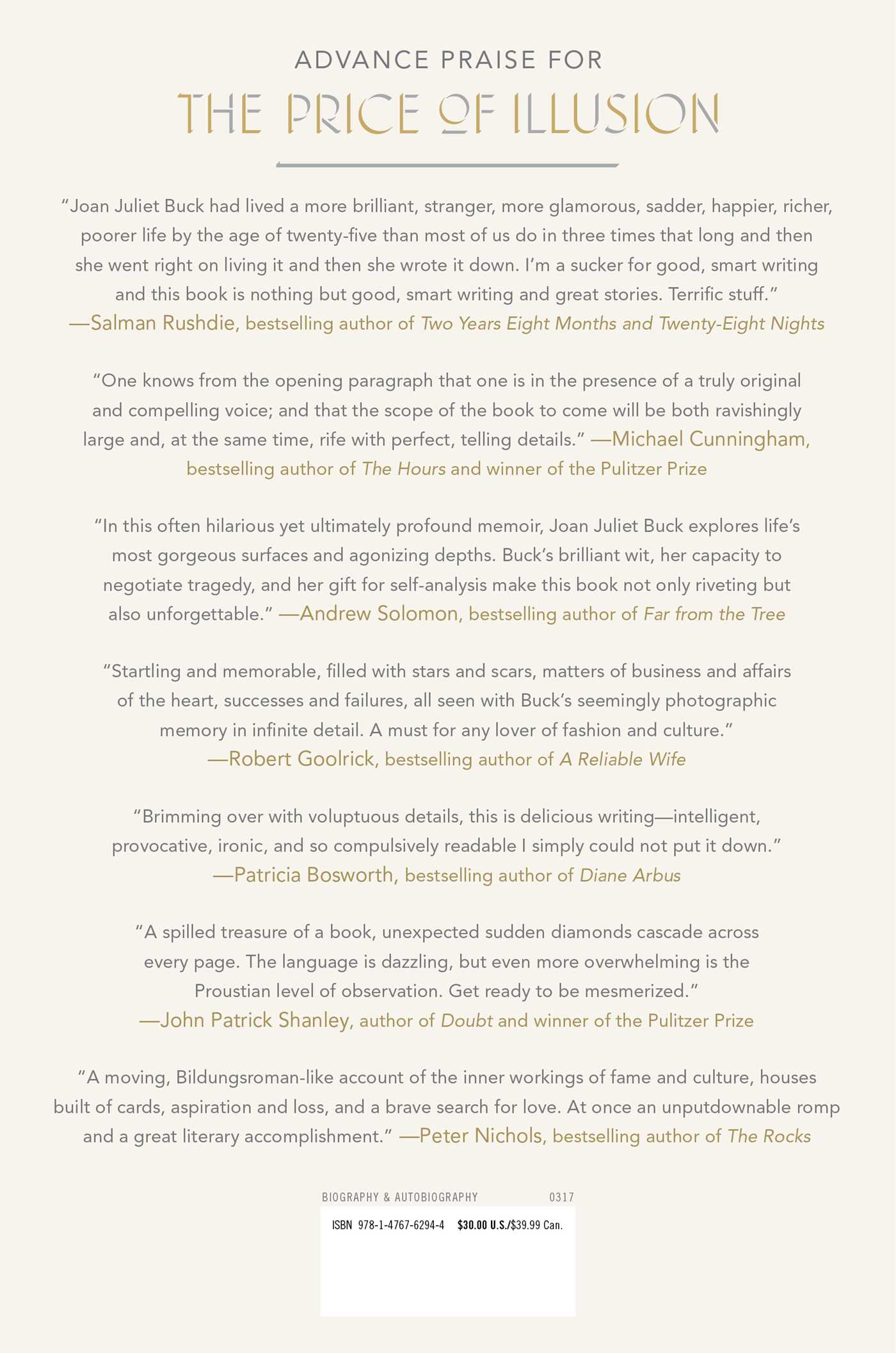 The Price of Illusion

From Joan Juliet Buck, former editor-in-chief of Paris Vogue comes her dazzling, compulsively readable memoir: a fabulous account of four decades spent in the creative heart of London, New York, Los Angeles, and Paris, chronicling her quest to discover the difference between glitter and gold, illusion and reality, and what looks like happiness from the thing itself.

Born into a world of make-believe as the daughter of a larger-than-life film producer, Joan Juliet Buck’s childhood was a whirlwind of famous faces, ever-changing home addresses, and a fascination with the shiny surfaces of things. When Joan became the first and only American woman ever to fill Paris Vogue's coveted position of Editor in Chief, a “figurehead in the cult of fashion and beauty,” she had the means to recreate for her aging father, now a widower, the life he’d enjoyed during his high-flying years, a splendid illusion of glamorous excess that could not be sustained indefinitely.

Joan’s memoir tells the story of a life lived in the best places at the most interesting times: London and New York in the swinging 1960s, Rome and Milan in the dangerous 1970s, Paris in the heady 1980s and 1990s. But when her fantasy life at Vogue came to an end, she had to find out who she was after all those years of make-believe. She chronicles this journey in beautiful and at times heartbreaking prose, taking the reader through the wild parties and the fashion, the celebrities and creative geniuses as well as love, loss, and the loneliness of getting everything you thought you wanted and finding it’s not what you’d imagined. While Joan’s story is unique, her journey toward self-discovery is refreshing and universal.

The Price of Illusion PROLOGUE
Shrieks of lightning hit the parking lot at Linate Airport, but the flight from Paris had been smooth. I sheltered flat against the plate-glass wall waiting for the car and wondered where this storm had come from. I told myself it wasn’t personal.

The lightning and the rain created traffic jams through Milan that made me late to meet Jonathan Newhouse at Caffè Cova, where I’d been summoned for a talk before the first fashion show. When I arrived, I apologized for the weather.

He sat on a corner banquette beneath a display of porcelain, wearing new glasses that made him look like Rodchenko.

The teacups shone in the glass case behind him; the brass fittings on the mahogany glowed around us in the muted clatter of high heels and waiters’ shoes and teaspoons in china cups and distant bursts of steam nozzles foaming the cappuccinos in the front room. I could feel the tight armholes of my narrow tweed coat, the tug of the pink velvet seat against the crepe of my dress, my platform shoes tight over my toes. My laptop was at my feet in a Gucci case designed for me, next to my Prada bag. New look for the new season, every label in place.

“I want you to take a sabbatical, starting today,” he said.

“On the first day of the European collections? I can’t do that.”

Sudden stillness. Ice water in my veins. Guillotine. It’s over. What did I do?

Two thoughts collided and set off a high-pitched whine in my head. No more Vogue. Back to writing. I’ve been on show watching a show for almost seven years, and it’s always the same show. I have nothing to write about.

That’s the end of the salary, the end of the job, why did I think salary before I thought job? How can I take care of Jules now? He’s eaten everything I earn. His apartment, Aneeta who looks after him, Johanna who relieves Aneeta, the studio for Johanna above his apartment, the taxi service, his doctors and his dentists, his meals, his clothes, his everything.

“This is between us, don’t talk to anyone,” said Jonathan. He pushed a piece of paper at me with one word on it, the name of the place where he wanted me to go. “It’s just two months, then you’ll come back. I’m doing this because I’m your friend.”

“Either you’re my friend, or you’re setting me up,” I said. “I choose to believe you are my friend.”

And having demonstrated to myself how gallant I could be, I decided to proceed to the next item on the typed list my assistant had pasted in my datebook. “I’m late for Prada,” I said, and before he could stop me I rose and carried my two bags through the steam and crowd of the front room, out into the rain to the waiting car, and on to the Prada show, where I stared at the shoes on the feet of the editors across the runway, and then at the shoes on the feet of the models on the runway, until it hit me that my opinion of the shoes, the dresses, the models, the hair, had entirely ceased to matter. When the show was over, the front-row editors headed backstage to congratulate Miuccia Prada, and I walked very slowly the other way, out onto the street.

Back in my hotel room, I stared at the bed, uncertain what to do next. Beautifully wrapped packages from fashion houses were piled everywhere. I knew the same gifts were in the rooms of every editor in chief in every hotel in Milan: small leather goods with logos, the new handbag, the new fragrance, the new scarf and tassel. Garment bags lay across the sofa, heavy with the fall clothes I’d ordered from Missoni and Jil Sander six months earlier. Clothes for a life I no longer had. He’d said I would come back, but I knew that wasn’t true.

I looked at the name of the place where I was supposed to go. It didn’t occur to me to call my lawyer.

No talking to the press, no talking to anyone, no noise, no movement. He wanted me off the planet, invisible. I couldn’t stay at home; my apartment in Paris was in the center of a knot of fashion streets patrolled by attachés de presse and luxury-goods executives. I’d always thought that in a crisis I’d retreat to a friend’s ranch in central California, but we were in one of our periodic frosts and hadn’t spoken for over a year. There were others in America who’d welcome me; I could hide in their big houses by the sea as fall became winter, but there would be weekends and weekend guests and gossip, and I had been ordered to vanish.

My entire life had been one easy exile after another, but I’d lived in too many places to belong anywhere. I had nowhere to go. I looked again at the slip of paper Jonathan had given me. Cottonwood. 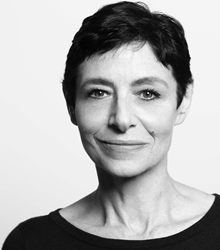 Joan Juliet Buck is an American novelist, critic, essayist, and editor. She served as editor-in-chief of Vogue Paris from 1994 to 2001. While a contributing editor to Vogue, Vanity Fair, Traveler, and The New Yorker, she wrote two novels, The Only Place to Be and Daughter of the Swan. Currently, she writes for W, Harper’s Bazaar, and New York Times T Magazine.

“A parade of stars and styles . . . . Think of anyone who had cachet in the world of movies, literature or fashion starting in 1970 or so, and chances are good that they pop up in this book. . . . Buck has been a fabulous Zelig in the world of memoirs.”

“Relentlessly candid and often absorbing account of a complex life spent in and out of the fashion spotlight."

"If you loved The Devil Wears Prada, you’ll adore Joan Juliet Buck’s The Price of Illusion, her deliciously written memoir of her golden life in Hollywood and at Paris Vogue, which became more and more about running as fast as she could until, in one of the best blow-by-blows of being fired you’ll ever read, she finally began to figure out what matter.”

"Fans of high fashion and celebrity culture will enjoy this insider account."

“Ms. Buck has been everywhere, done everything — the most delicious…pages I’ve read in months….sure to ravish the best-seller lists.”

“One knows from the opening paragraph that one is in the presence of a truly original, and compelling, voice; and that the scope of the book to come will be both ravishingly large and, at the same time, rife with perfect, telling details.”

– Michael Cunningham, bestselling author of A Wild Swan and The Hours

“Brimming over with voluptuous details, this is delicious writing—intelligent, provocative, ironic, and so compulsively readable I simply could not put it down.”

“In this often hilarious yet ultimately profound memoir, Joan Juliet Buck explores life’s most gorgeous surfaces and agonizing depths.  She writes with brio even when she narrates times of difficulty, and achieves a remarkable mixture of modesty, exuberance, and pained confession.  Buck’s brilliant wit, her entirely original sense of style, her capacity to negotiate tragedy, and her gift for self-analysis make this book not only riveting, but also unforgettable.”

– Andrew Solomon, bestselling author of Far From the Tree

“A startling and memorable memoir, filled with stars and scars, matters of business and affairs of the heart, successes and failures, all seen with Buck’s seemingly photographic memory in infinite detail. A must for any lover of fashion and culture, and for all those who cherish a life lived to its fullest. The Price of Illusion is a great record of a truly remarkable life.”

"Anybody could make a riveting life story of the events and rolodex of people in this book, but reading it, I was most reminded of James Salter's autobiography Burning the Days, the inquiry by a great writer into his own remarkable life. It is a moving, Bildungsroman-like account of the inner workings of fame and culture, houses built of cards, aspiration and loss, and a brave search for love. At once an unputdownable romp through sixty years of a world that no one will ever know better than Joan Juliet Buck, and a great literary accomplishment."

"The Price of Illusion is a spilled treasure of a book. Unexpected sudden diamonds cascade across every page. The language is dazzling, but even more overwhelming is the Proustian level of observation. Fashion is laid bare of its artifice. Celebrated giants like Peter O'Toole and John Huston show up in human form. And Miss Buck's career and family flameouts dovetail into a single, heartbreaking tragedy. If you are drawn to glamour and pain, get ready to be mesmerized."

– John Patrick Shanley, winner of the Pulitzer Prize and author of Doubt

“Buck offers sharp, candid observations….the author is an appealing protagonist who never takes herself too seriously, nor those around her….By the end of this exquisitely written memoir, Buck emerges triumphant.”

A happy ending? Try this: As she recovers from her addiction to Conde Nast and fashion, Joan Juliet Buck is at last free to be the writer she always wanted to be.”

"Like a tin of caviar or a strand of heirloom pearls, Joan Juliet Buck's memoir...satisfies the appetite for luxury [and] poignant instrospection."

"A juicy read that leaves no stone unturned in its critical view of the fashion and publishing worlds..."

"One of the most compelling personalities in the world of style...a shrewd and longtime chronicler of trends."

The Price of Illusion