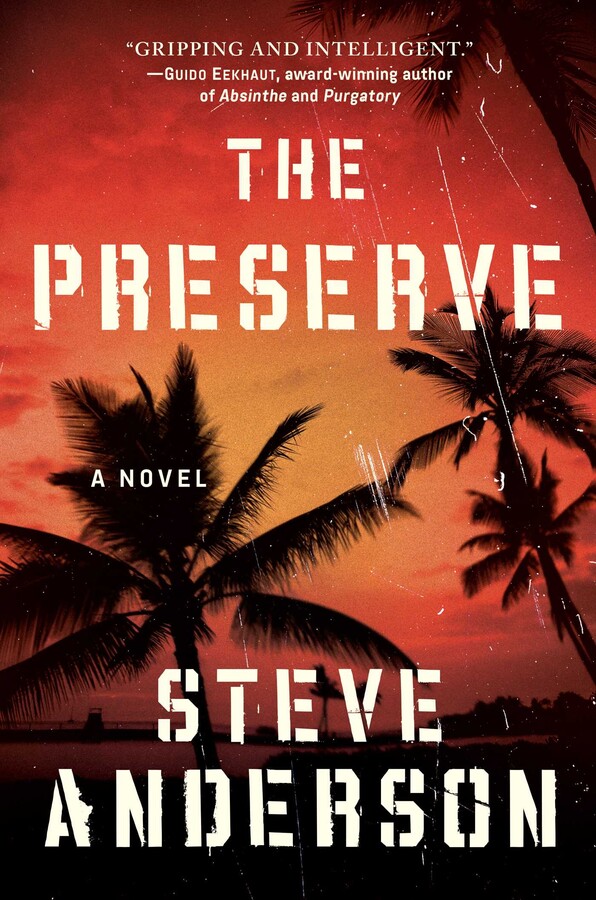 By Steve Anderson
LIST PRICE $25.99
PRICE MAY VARY BY RETAILER

A Heart-Racing Postwar Thriller Ripped from the Pages of History

Who will reap the rewards of war?

Troubled WWII hero turned deserter Wendell Lett desperately seeks a cure to his severe combat trauma, and The Preserve seems to be his salvation. Run by Lansdale, a mysterious intelligence officer, and Lett’s ambitious wartime XO Charlie Selfer, the secretive training camp promises relief from the terrors in his mind. Together with Kanani Alana, a tough-minded Hawaiian also looking for a new start at The Preserve, Lett begins to feel hopeful.

All illusions are shattered, though, when Lett discovers The Preserve’s true intentions—to rebuild him into a cold-blooded assassin. The deadly conspiracy runs deep, all the way to General Douglas MacArthur, and his refusal to cooperate is met with merciless punishment. His only hope is Kanani and her dangerous escape plan that would grant freedom from The Preserve—if he can hide while surviving the harsh wilderness of the Big Island.

Based on true events, The Preserve is a fast-paced historical thriller that will leave you breathless.

The Preserve is the second book featuring Wendell Lett, who first appeared in the prequel Under False Flags.

Steve Anderson is the author of the Kaspar Brothers series (The Losing Role, Liberated, Lost Kin), Under False Flags: A Novel, and other works centered on WWII and its aftermath. In The Other Oregon and the novella Rain Down (Kindle Single), he writes about his home state. Anderson was a Fulbright Fellow in Germany, and is a literary translator of German to English as well as a freelance editor. He lives in Portland, Oregon. http://www.stephenfanderson.com

"A gripping and intelligent adventure thriller that takes us to an unknown but fascinating part of history, and to exotic but deadly locations, with plenty of lively action, and with characters I instantly liked." —Guido Eekhaut, award-winning author of Absinthe and Purgatory

"Oregon author Steve Anderson is a noteworthy young author, a man with history in his veins and wars in his imagination. . . . Steve has a stingingly strong way with prose, pausing at times for a bit of poetic reverie that enhances the bite of the tale. He has the gift as he has proven with his many published novels to date. This is an extraordinarily fine historic drama, based on true events, and enhanced by the author’s flair for exciting fiction. Very highly recommended." —San Francisco Review of Books

“Readers will root for Wendell, with his unrelenting demons, as he soldiers on, fighting for his sanity and his life.” —Publishers Weekly

"The Preserve artfully blends post-WWII Hawaii with a treasure hunt. Exciting from the beginning, the author takes us into scenes of the Big Island and the tortured mind of a soldier suffering from 'combat fatigue,' what we now know as PTSD. Highly atmospheric and a great read for military buffs and those interested in a ​​thrilling story." —Ron Lealos, author of Pashtun

“In The Preserve, Steve Anderson once again paints a compelling and page-turning thriller with the men and women treated almost as expendable tools for post WWII intrigue and violence. Once you read this story, the background of the almost coup d’état by MacArthur becomes all the more plausible--and frighteningly possible even today.” —Peter Riva, author of Kidnapped on Safari and Murder on Safari

“Inspired from these real-life events spanning the Yamashita gold conspiracy and General MacArthur’s inheritance of the ‘secret mother lode’ of looted fortune, Steve Anderson’s The Preserve, set in the Hawaii of 1948, raises the curtain on the American hegemony that persisted in the postwar era.” —The Big Thrill magazine

"Anderson quickly puts the reader into Lett’s deeply troubled mind, into Alana’s clever ploys, into the terrain and physical challenges. He knows the military, the weapons, and jargon. His prose is often compelling . . . A deep study of what war and greed can do to the survivors." —Historical Novel Society

"A fast-paced historical thriller that will linger in the mind and memory long after the novel is finished and set back upon the shelf." —Midwest Book Review

“The Preserve is a first-rate historical thriller. It is fast, dark, and complicated without becoming ridiculous … And Anderson clearly did his research. He salts enough historical fact throughout the book to give it flavor without weighing down the action.” —Rose City Reader

Praise for Under False Flags

"A fascinating era, one of history's deep, dark pockets, observed with camera-like precision—captivating characters and dialogue worthy of Mad Men. I shouldn’t endorse Steve Anderson, I should put out a contract on him—he’s the competition. If you read only one book this year, read Lost Kin." —John Lawton, author of the Inspector Troy and Joe Wilderness novels

"Munich, a year after the end of WWII, is a bombed-out city of despair, the perfect backdrop for this dark tale of murder, brotherly betrayal, and intrigue. Steve Anderson deftly creates a world on the razor’s edge of survival, where yesterday’s allies are tomorrow’s cruel enemy, with the innocent caught in between. The setting is so ably envisioned you’ll want to brush the brick dust from your hands. A great read!” —James R. Benn, author of The White Ghost, a Billy Boyle WWII mystery

"Bravo! In times of great migrations to the West and all across Europe, Steve Anderson's Lost Kin comes as a timely reminder. This is a hard-hitting tale of international intrigue, forced repatriation, and the bittersweet meaning of kinship when all values—even the most elementary ones—appear to have been swallowed up by war.” —Ben Pastor, author of Tin Sky, the latest novel in the Martin Bora series

"An excellent atmospheric portrayal of post-war Germany and the complexities of growing international maneuvering during that period, all wrapped in an intriguing mystery. Great read, especially for history buffs looking for a book written with intelligence and passion. Kudos!” —Ron Lealos, author of Pashtun and Don’t Mean Nuthin'

“Classic noir shadowed by the hulks and rubble of the once-proud city of Munich, a character itself in this haunting tale . . . Anderson deserves a standing ovation.” —Kirkus Reviews

By Steve Anderson
LIST PRICE $25.99
PRICE MAY VARY BY RETAILER