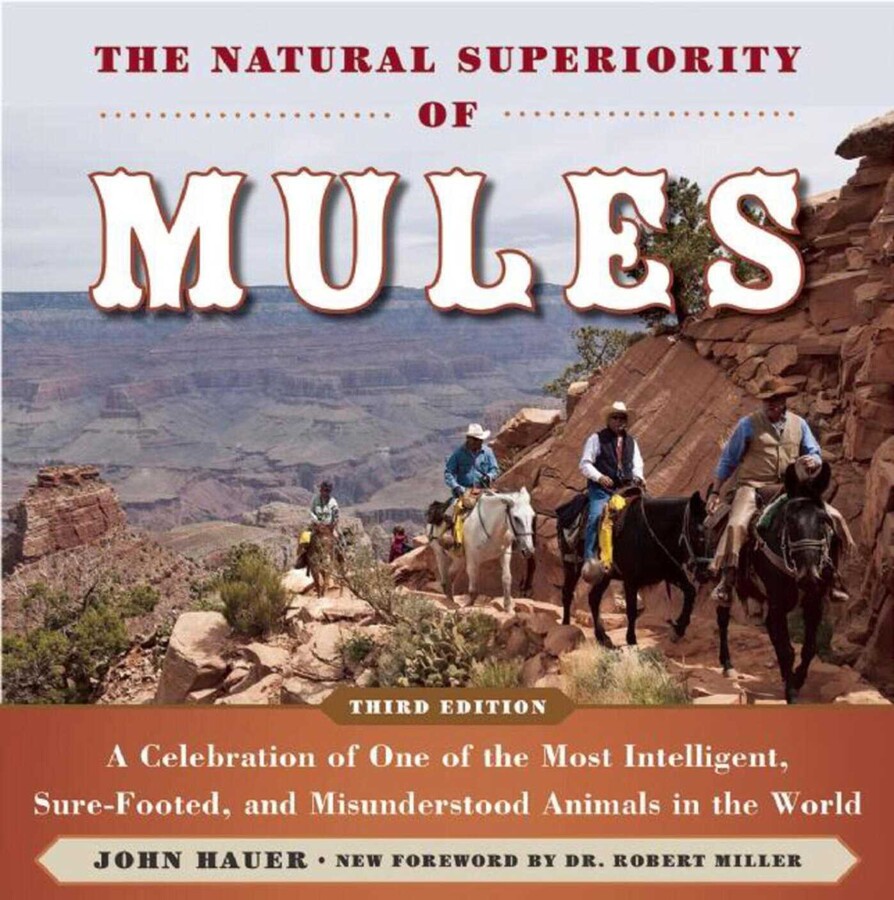 The Natural Superiority of Mules

A Celebration of One of the Most Intelligent, Sure-Footed, and Misunderstood Animals in the World

Mules are hybrids within the animal kingdomthe infertile offspring of male donkeys and female horses. Baby mules are more playful and curious than their other equine cousins, and the mature mule is one of the most fascinating, yet often underappreciated, creatures in the world. In the first paperback edition of The Natural Superiority of Mules, distinguished rancher John Hauer celebrates these magnificence of the mule through essays, articles, stories, and over 150 beautiful full-color photographs.

The pieces in this collection draw attention to many of this hybrid’s most impressive characteristics, including its strength, grace, and loyalty, was well ashile other sections are dedicated to mule genetics, mule training, and mule history. Contributors to this distinct collection range from recognized professionals in the equine community to those who have recently purchased their first mules. These experts and aficionados include Janet Lowe, Betty Robinson, Robert M. Miller DVM, Sena Hauer, and more than two dozen others!

Mule lovers will be enchanted--and horse lovers just may be converted--by these tales of the stamina, intelligence, loyalty, and common sense displayed by the average mule.

Let’s start at the beginning. A mule is the progeny of a male donkey (a jack) and a female horse (a mare). In contrast, the union of a male horse (a stallion) and a female donkey (a jenny) produces, if anything, a hinny. Because conception is difficult for the female donkey bred to a male horse, there are very few hinnies. Hinnies are slightly more horse-like in appearance than mules, but it is difficult to tell them apart. Like most hybrids, both mules and hinnies are sterile. Since it takes about a month longer to make a donkey than a horse, one might expect a certain degree of superiority on the part of the mule.

…It all starts at birth: Baby mules are just a bit more precocious than other equine creatures. Of course the most obvious physical advantage of the mule is those magnificent ears! It is true that when shown a mule, a donkey and a horse, an artist, poet, or engineer will recognize that the mule’s ears are in better proportion to the head than either the donkey’s or the horse’s. Many horses display a very hostile attitude toward mules. Their hostility may be attributed to “ear-envy.”

Both the mule’s hearing and ability to express emotions are enhanced by those graceful and flexible appendages. Some old-time mountain men believed that the mules’ ears also account for their great sense of balance on narrow mountain trails, and that the long ears serve the same function as the balance pole carried by high-wire acrobats.

A rider who watches his mule’s ears will have otherwise unnoticed wildlife, people and other things of interest pointed out to him. It is said that mules can “see” as much with their ears as with their eyes. And, when a mule’s ears are flopping in rhythm with her gait, it is a sign that the mule feels that all is right in the world. (I have a slight preference for female mules [mollies] and use feminine pronouns when referring to mules.)

Going to the underside of the mule, you will find small, slightly constricted but very hard and durable hooves. One veterinarian compared the composition of mule hooves to ivory, noting that they rarely crack or split. It is often not necessary to put shoes on a mule, and those “bare feet” have great traction.

Speaking of veterinarians, unless you have a crush on yours, this is good news: Mules are much less likely than horses to injure themselves, colic, or contract laminitis, navicular syndrome or ringbone. They have a hefty sense of self-preservation, and rarely go over backward with a rider, run through fences or injure one another by kicking. If a mule gets a leg caught in a barbed-wire fence, she will either figure out how to free herself without injury or will wait stoically and patiently for help. The mule rarely overeats to the point of detriment or drinks too much when overheated. A horse veterinarian once told me that if everyone rode mules she would soon be out of business.

How then did mules get such a universal reputation for being stubborn? In the days when mules were used primarily as working animals, the people who used them were often ignorant and inexperienced, thinking that if brute force and mistreatment did not get results, more force and mistreatment were called for. In other words the “two-by-four mentality” prevailed. Those “mule skinners” didn’t realize that “you have to treat a mule like you should treat a horse.”

Loren Basham, a professional mule trainer in Bland, Missouri, says, “When I train a mule, I try to make the mule think that everything I ask her to do is her idea. A horse can usually be intimidated and forced to do things that he perceives to be either senseless or potentially harmful to herself. However, a mule may ‘balk’ or become ‘stubborn’ when asked to exceed her capacity to perform or to do something unnecessarily dangerous. For example, mules have rarely been used as war animals that are expected to charge headlong into enemy fire, because the mule will very likely decide that such activity could endanger her well-being.” (Remember that strong sense of self-preservation?)

Here are some other examples of so-called stubbornness: Most mules cannot be “ridden to death” as horses can. When a mule is ridden to the point that she feels her health is in danger, she will stop, perhaps lie down and refuse to go on until sufficiently rested. It takes a tremendously long ride to get a well-conditioned mule that tired.

If a pack mule is loaded with more weight than she can safely carry, she may lie down or just refuse to move. When the load is reduced to within her self-preservation limits, she will carry it willingly.

When asked to cross a stream or ditch, the mule may notice a safer or easier crossing and try to convince the rider that there is a better place to cross. Most mule riders eventually learn to heed the advice of the mountain men: “Trust your mule.”

I took two mules to a trail ride in Wyoming where most of the other riders were from Jackson Hole and owned very fancy horses. None of them had ever seen a saddle mule before. They were surprised that the mules were not as “ugly as sin.” To their dismay, there was not a horse on the ride that could keep up with the mules.

The next week, a friend who had ridden one of my mules was told by a horseman from the Wyoming ride that he was surprised to see the mules there and said, “It must take a lot of self-esteem to ride a mule.” This is probably true, because of all the “cute” and deprecating comments a mule rider hears about his or her mount from the uninformed. Most mule riders do seem to have a fair amount of self-esteem, a good sense of humor, and more joie de vivre than the average person.

The attitude of old-time cowboys toward mules is illustrated by the following story, told by Max Harsha of Cliff, New Mexico: “An old boy told me he always liked to ride mules but they were kind of like your girlfriends: It was nice to have ’em around, but it was embarrassing to get caught on one.” Max says that attitude has changed, and today it is fashionable to be seen on a nice mule.

One old-time cowboy is reported to have told people he rode a mule because he was too poor to ride a horse and too proud to ride a cow.
John Hauer

The Natural Superiority of Mules

A Celebration of One of the Most Intelligent, Sure-Footed, and Misunderstood Animals in the World