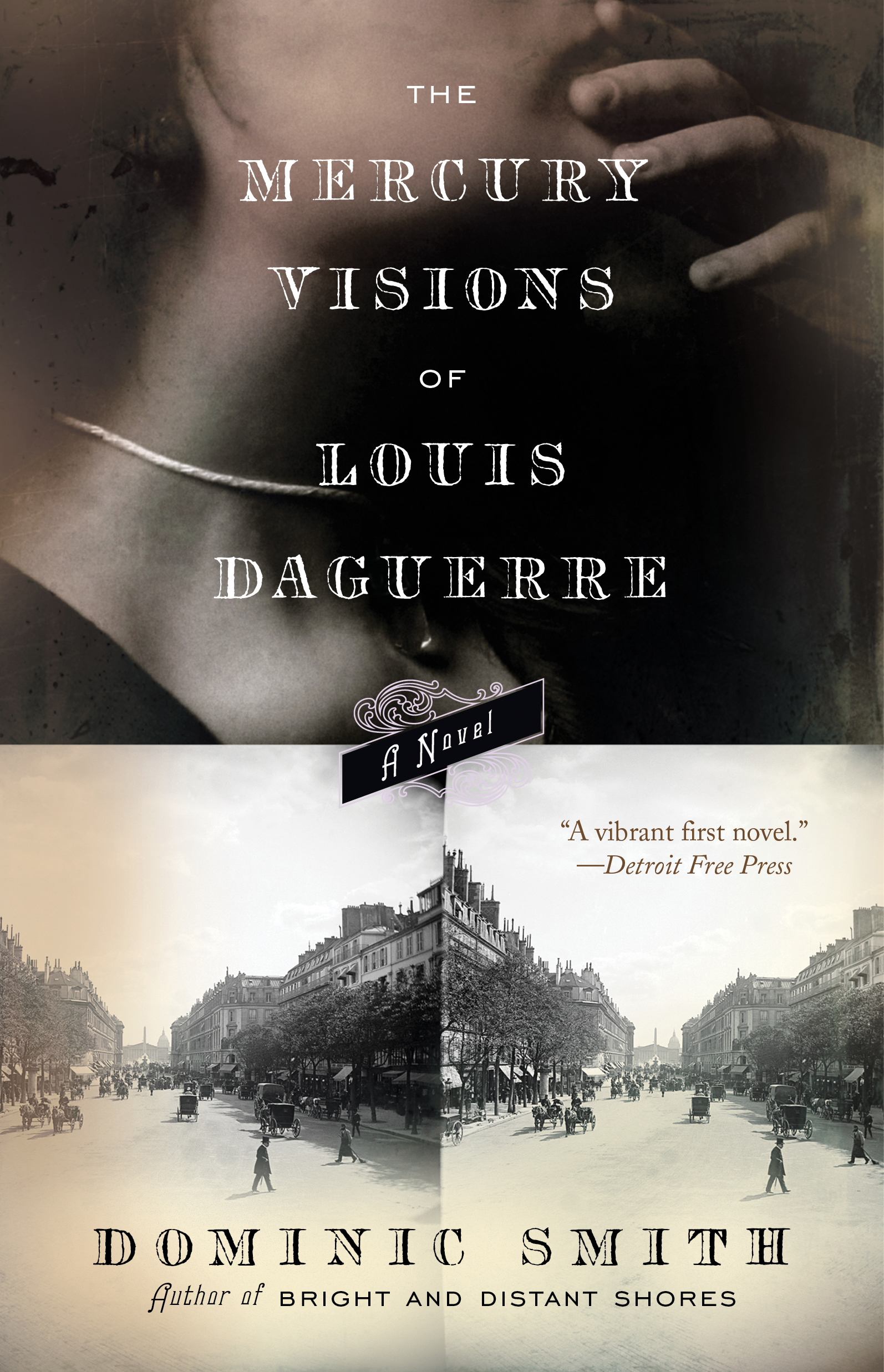 By Dominic Smith
LIST PRICE $12.99
PRICE MAY VARY BY RETAILER

The debut novel from the New York Times bestselling author of The Last Painting of Sara de Vos reimagines the life of Louis Daguerre, the inventor of photography, who becomes convinced that the world is going to end when his mind unravels due to mercury poisoning. He is determined to reconnect with the only woman he has ever loved before the End comes.

Louis Daguerre's story is set against the backdrop of a Paris prone to bohemian excess and social unrest. Poets and dandies debate art and style in the cafes while students and rebels fill the garrets with revolutionary talk and gun smoke. It is here, amid this strange and beguiling setting, that Louis Daguerre sets off to capture his doomsday subjects. Louis enlists the help of the womanizing poet Charles Baudelaire, known to the salon set as the "Prince of Clouds" and a jaded but beautiful prostitute named Pigeon.

Together they scour the Paris underworld for images worthy of Daguerre's list. But Louis is also confronted by a chance to reunite with the only woman he's ever loved. Half a lifetime ago, Isobel Le Fournier kissed Louis Daguerre in a wine cave outside of Orleans. The result was a proposal, a rejection, and a misunderstanding that outlasted three kings and an emperor. Now, in the countdown to his apocalypse, Louis wants to understand why he has carried the memory of that kiss for so long.

By clicking 'Sign me up' I acknowledge that I have read and agree to the privacy policy and terms of use. Free ebook offer available to NEW US subscribers only. Offer redeemable at Simon & Schuster's ebook fulfillment partner. Must redeem within 90 days. See full terms and conditions and this month's choices.
Reading Group Guide
The Mercury Visions of Louis Daguerre by Dominic Smith

INTRODUCTION
Paris, 1847. Louis Daguerre has achieved the height of fame for his invention of the daguerreotype, but his legacy has come at a great cost. He is falling deeper and deeper into delusions caused by repeated exposure to mercury, the key ingredient in capturing photographic images. Daguerre believes the world will end within a year and creates a "Doomsday List," ten things he must photograph before the final day -- including a portrait of Isobel Le Fournier, the woman he loved and lost nearly a half century ago. With the aid of colorful poet Charles Baudelaire and a beautiful prostitute named Pigeon, Daguerre sets out to locate his subjects and fulfill his quest.
The Mercury Visions of Louis Daguerre weaves together the strands of Daguerre's life: his youth in rural France, the ruined love that gave rise to artistic achievement, and the eventual unraveling of a prodigious mind. As Daguerre counts down the days to his apocalypse, he is caught between memory and reality. Ultimately, he must confront his haunting past if he is to finally win the heart of the only woman he has ever loved.

QUESTIONS & TOPICS FOR DISCUSSION
1. Item number 10 on Louis Daguerre's "Doomsday List" of images to photograph is Isobel Le Fournier. Why is it so important to Louis that he find Isobel before (as he believes will happen) the world expires? Why does Louis confide in the poet Charles Baudelaire about his doomsday prophecy? What about the other items on the list? What do they reveal about Daguerre?
2. As a rapin at the theater, Louis is subjected to an "initiation" by his fellow apprentices, who attempt to frighten him by taking him to a morgue and having him sketch a portrait of a dead woman. Louis, however, stays inside the morgue for hours, long after he is free to leave. Why does Louis put so much time and effort into his drawing of the corpse? What does this incident reveal about Louis? What does Degotti mean when he later tells Louis, "You drew what you wanted to see" (78)?
3. Under Degotti's tutelage, Louis serves as the master paint mixer and brush washer at the theater for more than a year. What makes him finally stand up to Degotti and demand that he be allowed to paint a set? Is it a coincidence that Louis takes a stand on the same day he has his first sexual encounter with Madame Treadwell? Why or why not?
4. In what ways do the instances of civil unrest in France mirror Louis's states of mind, including the burning of the mansion in Orléans, the rioting taking place in Paris the first time he has a vision, and the uprising on the day his "apocalypse" arrives?
5. Why does Louis develop such an intense fascination with quicksilver, to the point where he "carried a phial of mercury around his neck at all times....He was, in a sense, in love again"? What does the quicksilver represent to him?
6. On the night Louis and Isobel kiss on the Pont Neuf in the shadow of Notre Dame, Isobel says to him, "Life is more complicated than you know." Louis replies, "Life is more mysterious than you know" (99). What do these statements reveal about Louis and Isobel's respective attitudes about life in general, as well as about their relationship?
7. On that same evening in Paris, Isobel tells Louis that someday he will be famous. "Louis knew this to be true; he saw it sometimes in the shop-windows when his reflection passed, the glimmer of who he was becoming" (100). Why is Louis so certain that he will achieve renown? Particularly when his discovery of the daguerreotype, as even he admits, is primarily accidental?
8. Describe the way Louis looks at the world both before and after the onset of his mercury-induced visions. What similarities, if any, are there? How did Louis's experiences as a boy, particularly his fascination with light and his youthful love for Isobel, shape his artistic viewpoint?
9. In a letter to Isobel (which he never gives her), Louis writes, "That day on Pont Neuf, you with child, began the rise of my career. I have often thought it ironic that losing you was what led me to fame" (184). What validity is there in Louis's belief that his losing Isobel is what led him to become famous? In what ways are his shifting feelings for Isobel reflected in his art and the arc of his career?
10. Why is Louis compelled to help Pigeon and save her from a life of prostitution? Is it merely because she is Isobel's daughter? Why does he not tell Pigeon about his connection to her mother? Does Pigeon even want to be "rescued" by Louis, or is she content with the life she has chosen?
11. Louis stores his portraits in the catacombs beneath the Paris Observatory before fleeing the city, but he decides to take one with him: the portrait of Pigeon on the rooftop of Baudelaire's mansion. Why does Louis choose to keep this particular image? What does it represent to him?
12. On the morning he awakens in Isobel's cottage, Louis realizes that "he did not want to die" (229). Why does he have a change of heart, particularly when he had been preparing for the apocalypse with determination and even a sense of detachment?
13. What is your overall opinion of Isobel? Why do you suppose she turned down Louis's marriage proposal? One evening at her cottage, Isobel asks Louis to kiss her. After nearly half a century, why does Isobel finally acknowledge her feelings for Louis?
14. When Isobel knows that she is about to take her last breath, she asks Louis to leave the room and make her a cup of tea. Why does Isobel send him away? And why does Louis, knowing what she is doing, agree to her request?
15. Discuss the impact of Louis's invention of the daguerreotype on France and on the world. Why were some people quick to embrace this new medium while others denounced it? Is it possible for us to fully understand the impact that such an invention would have had at the time? Why or why not?

ENHANCE YOUR BOOK CLUB
Enliven your get-together -- and your taste buds -- by meeting at a local café or bistro. Or serve up your own French-inspired fare with recipes from www.epicurious.com. There are more than 800 delectable choices in the French Cuisine section. Bon appétit!
Learn more about Louis Daguerre, the daguerreian process, and how it was received in America by visiting www.daguerre.org, the official website of the Daguerreian Society.
In a nod to Louis Daguerre's famous invention, appoint one or two members as "official photographers" for the evening. Then have each member select one or two photographs and compile them into an album to commemorate your group's discussion of The Mercury Visions of Louis Daguerre. 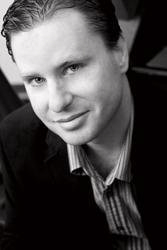 Dominic Smith grew up in Sydney, Australia and now lives in Austin, Texas. He holds an MFA in writing from the Michener Center for Writers at the University of Texas at Austin. His short fiction has been nominated for a Pushcart Prize and appeared in numerous journals and magazines, including The Atlantic Monthly.

Dominic serves on the fiction faculty in the Warren Wilson MFA Program for Writers and has taught recently at the University of Texas at Austin and Southern Methodist University. Find out more at www.dominicsmith.net.

By Dominic Smith
LIST PRICE $12.99
PRICE MAY VARY BY RETAILER