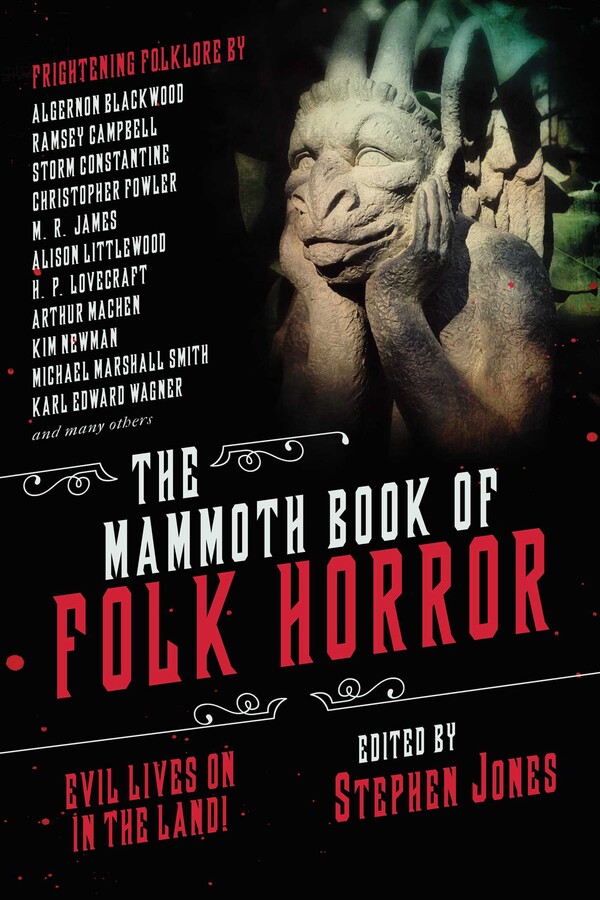 The Mammoth Book of Folk Horror

Evil Lives on in the Land!

The darkness that endures beneath the earth . . . the disquiet that lingers in the woodland surrounding a forgotten path . . . those ancient traditions and practices that still cling to standing stone circles, earthworks, and abandoned buildings; elaborate rituals that invoke elder gods or nature deities; the restless spirits and legendary creatures that remain connected to a place or object, or exist in deep wells and lonely pools of water, waiting to ensnare the unwary traveler . . .

These concepts have been the archetypes of horror fiction for decades, but in recent years they have been given a name: Folk Horror.

This type of storytelling has existed for more than a century. Authors Arthur Machen, Algernon Blackwood, H. P. Lovecraft, and M. R. James all published fiction that had it roots in the notion of the supernatural being linked to objects or places “left behind.” All four writers are represented in this volume with powerful, and hopefully unfamiliar, examples of their work, along with newer exponents of the craft such as Ramsey Campbell, Storm Constantine, Christopher Fowler, Alison Littlewood, Kim Newman, Reggie Oliver, and many others.

Illustrated with the atmospheric photography of Michael Marshall Smith, the stories in The Mammoth Book of Folk Horror tap into an aspect of folkloric tradition that has long been dormant, but never quite forgotten, while the depiction of these forces as being in some way “natural” in no way detracts from the sense of nameless dread and escalating horror that they inspire . . .

"There is no doubt thatStephen Jones is one of the very best anthologists working in the horror and fantasy fields now or in the past."
—John Gilbert, Phantasmagoria Magazine​

"[Stephen Jones is] one of the genre's most enthusiastic cheerleaders."
—Publishers Weekly

"Stephen Jones . . . has a better sense of the genre than almost anyone in this country."
—Lisa Tuttle, The Times Books

"A new anthology from Stephen Jones is always an event."
—Dennis Etchison

"WOW! I remember when books like this one were almost commonplace. Tons of terrific offerings, wonderful black-and-white interior work, solid bindings, sometimes even foil stampings, quality throughout, just the coolest. Great to see this coming out, even more so with Randy Broecker's illustrations!!"
—World Fantasy Award-winning artist Thomas Canty

"The best horror anthologist in the business is, of course, Stephen Jones."
—Roz Kavaney, Time Out

"Stephen Jones [is] a member of that tiny band of anthologists whose work is so reliably good that you automatically reach out and grab hold of any new volume spotted if you are wise."
—Gahan Wilson, Realms of Fantasy

The Mammoth Book of Folk Horror

Evil Lives on in the Land!