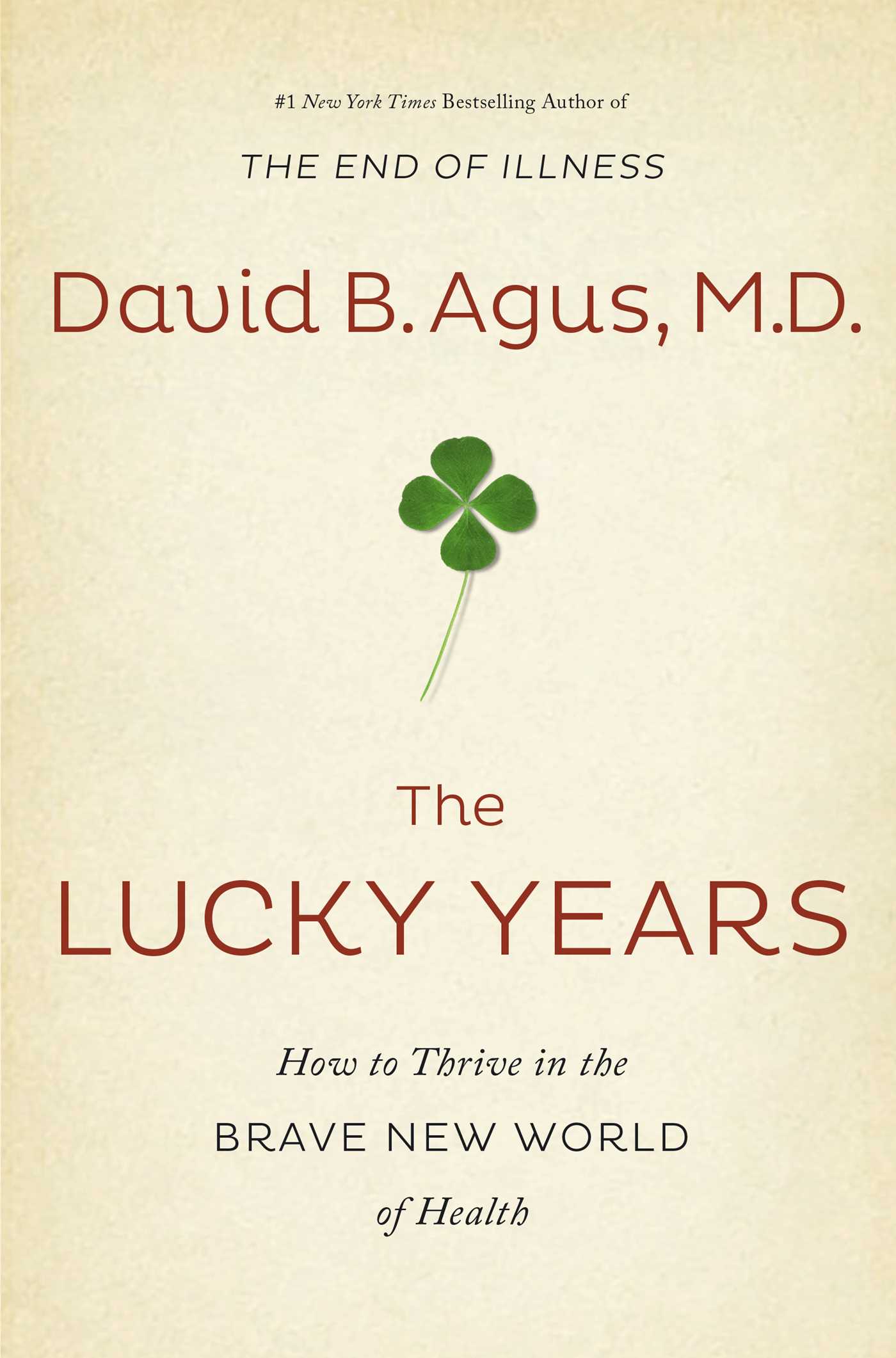 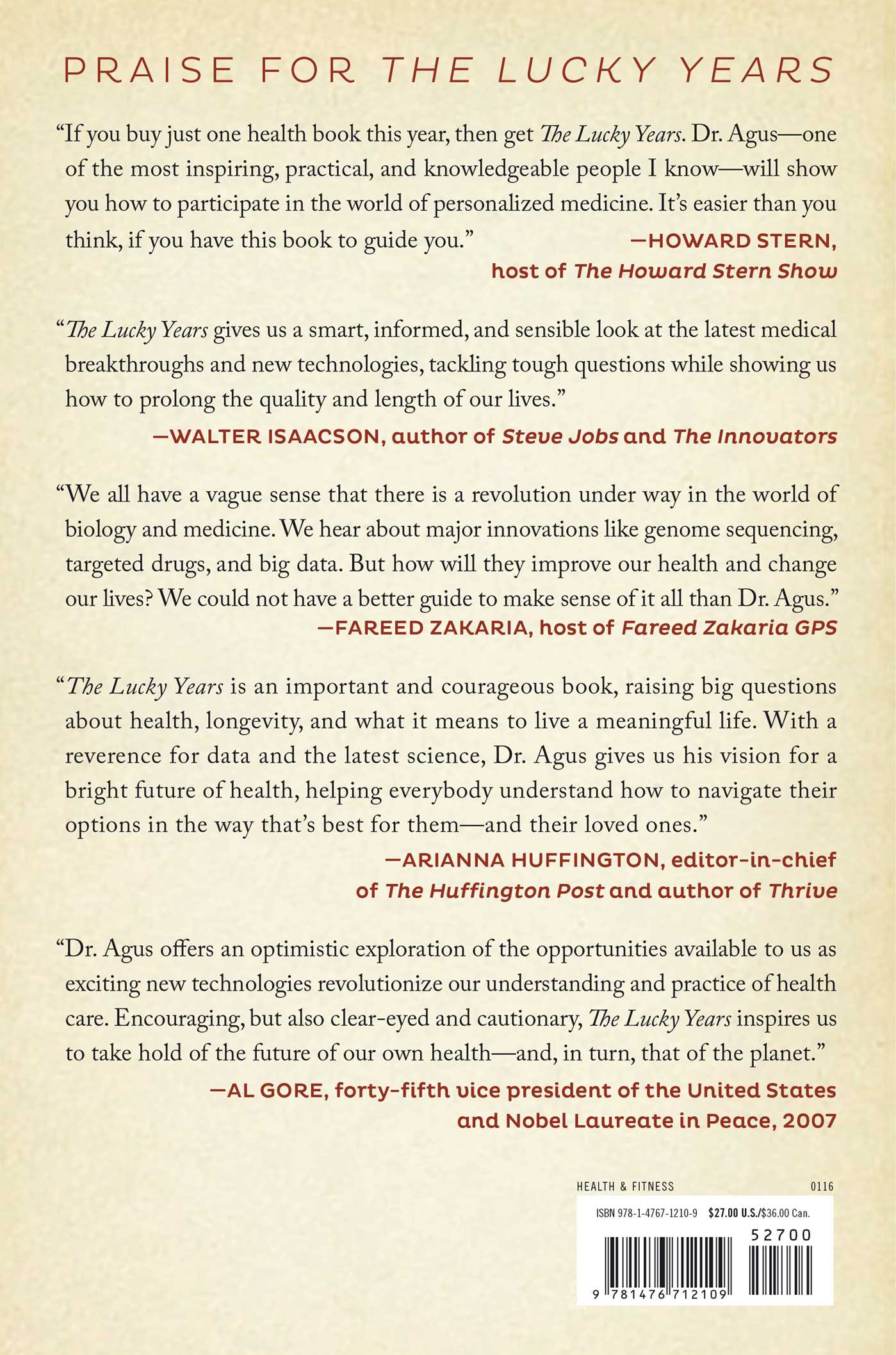 The Lucky Years
By David B. Agus
Read by Holter Graham

How to Thrive in the Brave New World of Health

By David B. Agus
LIST PRICE $27.00
PRICE MAY VARY BY RETAILER

Bestselling author David Agus unveils the brave new world of medicine, one in which we can take control of our health like never before and doctors can fine-tune strategies and weapons to prevent illness.

In his first bestseller, The End of Illness, David Agus revealed how to add vibrant years to your life by knowing the real facts of health. In this book, he builds on that theme by showing why this is the luckiest time yet to be alive, giving you the keys to the new kingdom of wellness.

Medicine is undergoing rapid change. In the old world, you followed general principles and doctors treated you based on broad, one-size-fits all solutions. In this new golden age, you’ll be able to take full advantage of the latest scientific findings and leverage the power of technology to customize your care. Only those who know how to access and adapt to these breakthroughs—without being distracted by hyped ideas and bad medicine—will benefit. Imagine being able to get fit and lose weight without dieting, train your immune system to fight cancer, edit your DNA to avoid a certain fate, erase the risk of a heart attack, reverse aging, and know exactly which drugs to take to optimize health with zero side effects.

That’s the picture of the future that you can enter starting today. Welcome to The Lucky Years.

How many goodly creatures are there here!

That has such people in ’t.

Miss Wanda Ruth Lunsford, twenty-six, must have been thinking about her own mortality the day she reported on a stunning experiment.1 Picture two rats, one old and gray, the other young and vivacious. Now imagine joining them surgically at their sides by peeling away a thin layer of skin and neatly stitching the exposed surfaces together. Through this Siamese-twin-like junction, the rodents are able to share their circulation, pumping each other’s blood and exchanging bodily fluids. Miss Lunsford and her colleagues wanted to see what would happen. Among the rats that survived the unnatural union, the geriatric ones physically turned into their younger counterparts, as if they’d tapped the fountain of youth. The elder rats gained shinier, more colorful fur and clearer eyes, taking on the general appearance of the younger rats hitched to their sides. A four-hundred-day-old rat, more or less akin to a middle-aged man, lived nearly as long as the spry counterpart to which he was attached.

When Miss Lunsford, a nutritionist and graduate student at Cornell University working in the lab of biochemist and gerontologist Clive McCay, shared these results at a gathering to focus on the problems of aging led by the New York Academy of Medicine, no one—not even Lunsford and her teammates—could explain this “age-reversal” transformation. The year was 1955, the same year the Food and Drug Administration approved the polio vaccine, the power of the placebo effect was first written about, Albert Einstein died at the age of seventy-six, and Steve Jobs and Bill Gates were born.2

Miss Lunsford’s procedure, anatomically linking two organisms, had a name by then—parabiosis. But while this wasn’t the first time it had been performed, her explorations were among the first to use parabiosis to study aging. And they weren’t without their challenges. According to one description of the research, “If two rats are not adjusted to each other, one will chew the head of the other until it is destroyed.”3 Of the sixty-nine pairs of rats that Lunsford had helped conjoin in Clive McCay’s lab, eleven died from a peculiar condition that developed about one to two weeks after partners were united; it was likely a form of tissue rejection. But the pairs that survived gave a glimmer of hope for reversing the maladies we all face.

In February of 1956, McCay, Lunsford, and a third Cornell researcher, Frank Pope, published their findings on the procedure’s overall restorative effects in the Bulletin of the New York Academy of Medicine with an apt title: “Experimental Prolongation of the Life Span.” In 1960, the results of Miss Lunsford’s investigations in McCay’s lab culminated in her thesis dissertation.4 But the research didn’t take off as you might expect in light of such intriguing findings. It pretty much sputtered and stalled for the next sixty-odd years. Interestingly enough, you can get a sense of the climate in which these scientists were working by reading a line in the opening paragraph of their paper: “Thus far man has made little progress in [studying aging] because human beings have chosen to expend their energies in improving the supposed comforts of living and methods of warfare.” 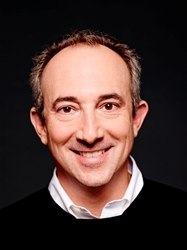 David B. Agus, MD, author of the New York Times and international bestsellers The End of Illness and A Short Guide to a Long Life, is a professor of medicine and engineering at the University of Southern California and heads USC’s Westside Cancer Center and the Center for Applied Molecular Medicine. He is one of the world’s leading physicians and pioneering biomedical researchers, and is a CBS News contributor. He lives in Beverly Hills, California.

"If you buy just one health book this year, then get The Lucky Years. In this important book, David Agus—one of the most inspiring, practical, and knowledgeable people I know—shows us how to participate in the world of personalized medicine. It’s easier than you think, if you have this book to guide you."
—Howard Stern, host of The Howard Stern Show

"Dr. Agus has done it again. The Lucky Years gives us a smart, informed, and sensible look at the latest medical breakthroughs and new technologies. Important and courageous, it tackles tough questions while showing us how to prolong the quality and length of our lives."
—Walter Isaacson, author of Steve Jobs and The Innovators

“We all have a vague sense that there is a revolution underway in the world of biology and medicine. We hear about major innovations like the sequencing of the genome, targeted drugs, and big data. But what to make of them? How will they improve our health and change our lives? We could not have a better guide to make sense of it all than David Agus. In this fascinating and illuminating book, David brings together a deep knowledge of science, good writing, and common sense. We are lucky to have him around.”
—Fareed Zakaria, host of Fareed Zakaria GPS

“The Lucky Years is an important and courageous book, raising big questions about health, longevity and what it means to live a meaningful life. With a reverence for data and the latest science, Dr. Agus gives us his vision for a bright future of health, helping everybody understand how to navigate their options in the way that’s best for them—and their loved ones.”
—Arianna Huffington, Editor-in-Chief of The Huffington Post and author of Thrive

“Dr. Agus offers an optimistic exploration of the new opportunities becoming available to us as exciting new technologies disrupt and revolutionize our understanding and practice of health care. Encouraging, but also clear-eyed and cautionary, The Lucky Years inspires us to take hold of the future of our own health—and, in turn, that of the planet.”
— Al Gore, 45th Vice President of the United States, Nobel Laureate in Peace, 2007

“Dr. David Agus describes how a series of scientific breakthroughs enables everyone to lengthen and improve their lives—a future in which our body's natural mechanisms can be enlisted to fight disease and our genes can be edited to eliminate inherited disease. It is an inspiring vision that we can embrace today.”
—Larry Ellison, Cofounder and Executive Chairman, Oracle Corporation

“The Lucky Years is a steady dose of actionable knowledge about the one thing relatable to everyone: life. It's the doctor-patient relationship we all want and deserve. Dr. Agus is a trusted voice in a field of uncertainty.”
—Ashton Kutcher

"It sometimes takes a genius to know the difference between what’s good and bad for us amid all the noise in health circles. Thanks, David Agus, for being that genius and writing The Lucky Years to guide us."
—Michael Dell, Founder, Chairman, and Chief Executive Officer of Dell, Inc.

“Everyone living today should read The Lucky Years to receive the enduring gift of Dr. David Agus’s wisdom. It will inspire you on a journey towards a life that is both more healthful and meaningful, and provide practical guidance for the path ahead. Dr. David Agus will show you what it truly means to live a healthy life in the lucky years.”
—Dov Seidman, author of How: Why How We Do Anything Means Everything

"In The Lucky Years, David Agus, one of the most interesting medical writers of our age, presents a provocative, highly informative way of understanding revolutions in health and healthcare today that will change the quality of our lives."
—Murray Gell-Mann, PhD, Nobel Laureate in Physics, 1969, and Distinguished Fellow and Cofounder of The Santa Fe Institute

"In The Lucky Years, David Agus once again gives us a clear path to better health. We are lucky to have such an incredible guide to such a critical subject."
—Marc Benioff, Chairman and CEO, salesforce.com

"If you have made a new year’s resolution to get healthier, you’ll find a buddy in David B. Agus’s new book, The Lucky Years."
—Boston Globe

"What is strongest here is Agus’s deft marshaling of research old and new, and his common-sense guidance on preventives such as sleep hygiene and the optimal level of exercise."
—Naure Magazine

"In previous volumes, Agus offered useful, accessible health tips for attaining prime physical health. Here, he expands on that platform by addressing readers from a futuristic vantage point and insightfully discusses how recent technological trends have the ability to boost both the medical industry's ability to effectively treat patients and its public perception, something that has incrementally declined through the last decade. . . . Readers interested in breakthrough clinical developments will find Agus' explorations of gene therapy, immunotherapy, and revolutionary stem cell research highly informative. . . . Practical health information fortified with exciting news from the forefront of modern medical technology."
—Kirkus Reviews

“Anyone who is depressed about the state of health care needs to read this book….This book will inspire all to live a more healthful and meaningful life!”
—AANS Neurosurgeon

How to Thrive in the Brave New World of Health

By David B. Agus
LIST PRICE $27.00
PRICE MAY VARY BY RETAILER

More books from this author: David B. Agus