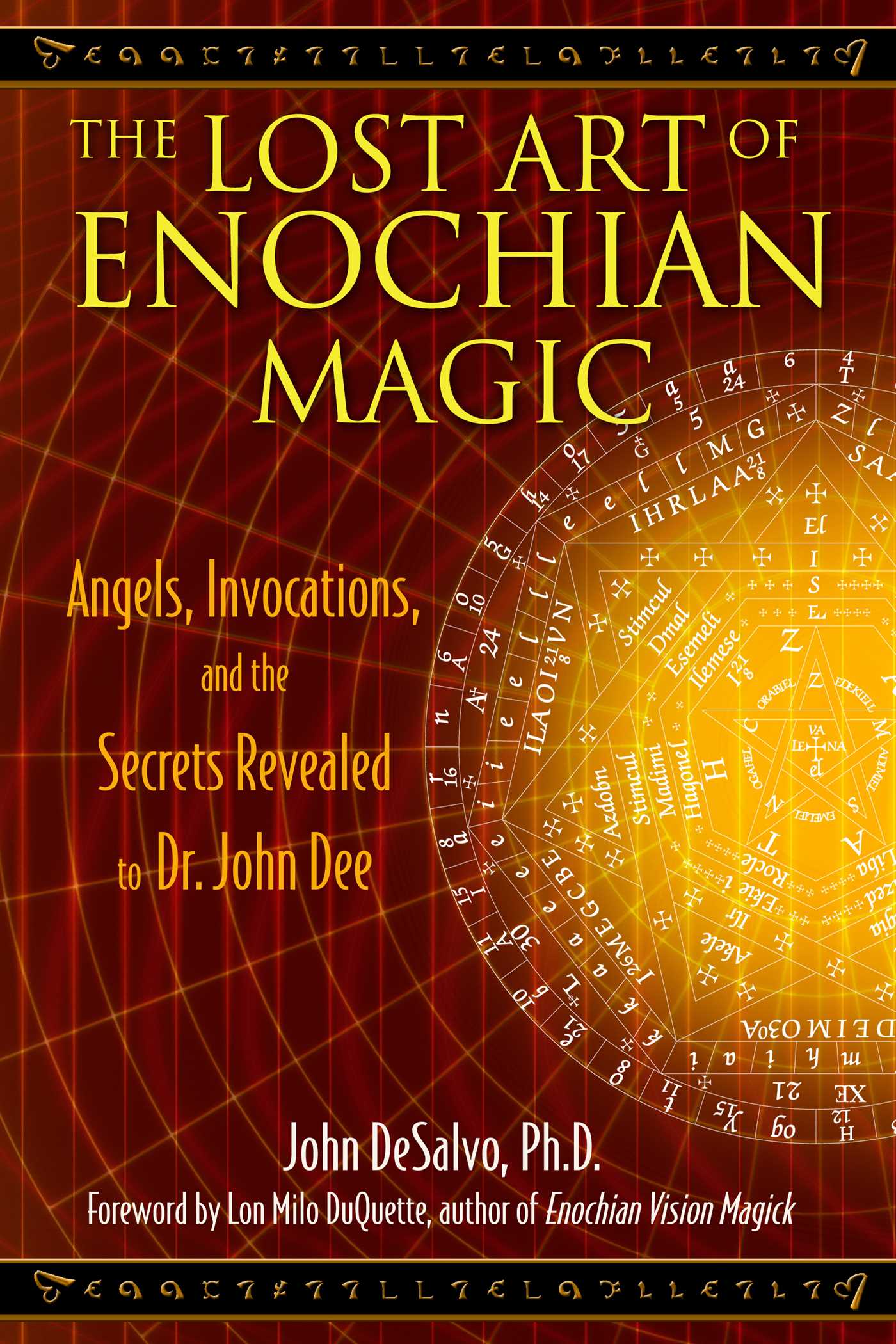 Enochian magic is a powerful, ancient system for opening portals to heavenly realms and enabling the ascent to God. The basis for many of the modern systems of magic, including the Golden Dawn, Enochian magic is named after the biblical prophet Enoch, who received the same knowledge and wisdom that was later conveyed to the astrologer to the court of Queen Elizabeth I, Dr. John Dee, by angels in the 16th century.

In The Lost Art of Enochian Magic John DeSalvo traces the history of magic--from the earliest civilizations of the Akadians and Egyptians through the Greco-Roman period and up to the present time--to reveal how magic has penetrated and influenced our religious beliefs and practices today. Through his unprecedented investigation into the angelic magic of Dr. John Dee, during which time he deciphered Dee’s original phonetic notations in the margins of Dee’s 16th-century diaries, DeSalvo learned to properly reproduce the “Enochian calls,” which act like mantras in opening higher realms and invoking angels, key to this type of magical practice. DeSalvo shows how to use Enochian magic for personal spiritual development and also as protection from negative energies.

MAGIC AND ITS INFLUENCE ON OUR EVERYDAY LIVES

When many hear the word magic, they either think of stage magic (magic tricks using sleight of hand) or something evil and dark with people dressed in black robes involving strange rituals. Numerous occult movies have contributed greatly to these misconceptions. Also, several modern groups tend to emphasize magical rituals carried out with individuals in robes using all kinds of magical implements including wands, daggers, incense, candles, and, of course, the chanting of strange-sounding names. Maybe this is what magic has become, but is this what magic was in the beginning and what it really was meant to be? I believe the answer is no.

According to ancient Jewish tradition, certain mystical and metaphysical teachings were given to man by the angels. This legend is mentioned in the Kabbalah, which claims that the angel Raziel gave this knowledge to Adam to restore his communion and relationship with God after the Fall. It is also the same knowledge that Enoch, the prophet of the Old Testament, was given by God. I believe that this wisdom and knowledge, which we now call magic, was passed down from one person to the next for thousands of years. When it is lost, the angels attempt to restore it to humankind.

To arrive at a proper description of magic, we must assume that there are other realities or dimensions or spiritual planes that exist in addition to our physical world. There are many spiritual realms, each one higher than the next. Where do they end? Let’s follow their path in the reverse order. We start with God, or the first cause (light, love, the force--whatever you want to call him). God creates the universe by a word or sound (om point, word of God, for instance). The first realm that is created is the highest and may be called the highest heaven or realm of the holy spirit. Whatever it is, it is the highest spiritual plane just below God. Then the next spiritual realm is created, which is a reflection of the highest plane and a step lower; perhaps this is the realm of the archangels. Then another plane is reflected below that; it may be the plane of the lower angels. Finally we get to the physical world, which is the lowest reflection of all of these planes.

Please keep in mind that these planes or realms are all interconnected and inside one another, but one is higher than the next in terms of its spiritual dimensions. Also, each of these realms or planes, like our physical world, is real and is composed of its own substances and beings. There are thirty aethyrs, or spiritual realms, that we will be discussing and using magic to enter. Each of these realms has its own angels, or governors as they are called, that control and monitor their world. These angels are also your guides and contacts when you enter these spheres. As we move up through the spiritual realms, or aethyrs, we get closer to God and experience his presence more and more.

So, now I can try to define magic in my own terminology. Magic is a ritual or meditation in which a person tries to reconnect and be present with God. In this case it is through the recitation of a special Enochian language that has been handed down through generations. There have been many books written about finding God. Unless you can experience it, however, it is just theory. Many techniques have been developed, but some require years of practice and exercise, costly classes and instruction, and many are just too difficult for the average person. I do not believe that God meant it to be this way. I believe there is an easy way and a most natural way that God has given us to help us on our spiritual search for him. He wants us to find him and be present with him.

As stated earlier, when the magic is lost (which it is from time to time), it will reappear again to an individual capable of understanding what it is and restoring it to humankind. Its most recent reappearance was in the sixteenth century when the angels transmitted it to Dr. John Dee of England, one of the most accomplished scientists and scholars of the day and also a very sincere spiritual pilgrim.

Please keep in mind that Dee was no fool. He was considered to be a true renaissance man and one of the best mathematicians of the day. He was an advisor to Queen Elizabeth and to many of the famous explorers of the time. He had one of the largest libraries in the world. It, of course, included the rarest occult and metaphysical books in existence. Many were one-of-a-kind manuscripts.

I have studied Dr. Dee’s original diaries from scans in the British Library, and in the margins of his diary Dee gives hints on how to pronounce the Enochian words that comprise this magic so as to invoke it. I have produced a version that I believe is the closest to how the angels meant the Enochian words to be pronounced. This is the key for opening the doors to the thirty aethyrs, or higher spiritual dimensions.
John DeSalvo

"Enhanced with the inclusion of a CD featuring Enochian calls demonstrating the correct pronunciation to be used when practicing Enochian rituals, The Lost Art of Enochian Magic will prove to be an invaluable and greatly appreciated addition to personal and academic library Metaphysical Studies reference collections and supplemental reading lists."