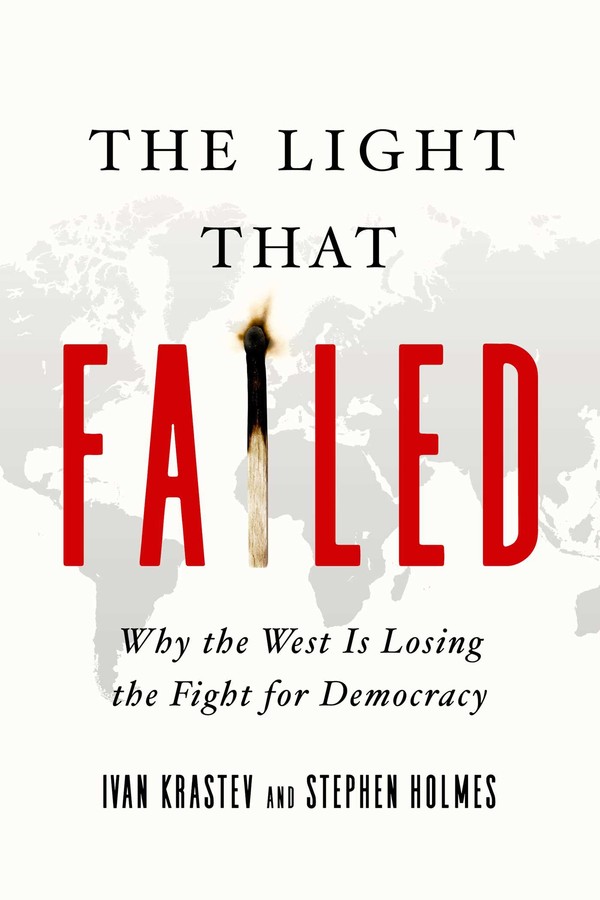 A landmark book that completely transforms our understanding of the crisis of liberalism, from two pre-eminent intellectuals.

Why did the West, after winning the Cold War, lose its political balance?

In the early 1990s, hopes for the eastward spread of liberal democracy were high. And yet the transformation of Eastern European countries gave rise to a bitter repudiation of liberalism itself, not only there but also back in the heartland of the West.

In this brilliant work of political history, Ivan Krastev and Stephen Holmes argue that the supposed end of Communism turned out to be only the beginning of the age of the autocrat. Reckoning with the history of the last thirty years, they show that the most powerful force behind the wave of populist xenophobia that began in Eastern Europe stems from resentment at the post-1989 imperative to become Westernized.

Through this prism, the Trump revolution represents an ironic fulfillment of the promise that the nations exiting from communist rule would come to resemble the United States. In a strange twist, Trump has elevated Putin’s Russia and Orba´n’s Hungary into models for the United States.

Written by two pre-eminent intellectuals bridging the East/West divide, The Light That Failed is a landmark book that sheds light on the extraordinary history of the fall of the Western ideal.

Stephen Holmes is a Professor at the NYU School of Law and the author of many books, including The Beginning of Politics. He lives in Manhattan.

Ivan Krastev is the chairman of the Centre for Liberal Strategies, Sofia, and permanent fellow at the Institute for Human Sciences, Vienna, a contributing writer for the international New York Times, and, most recently, the author of the acclaimed After Europe.

“The Light That Failed has its brilliant flashes of insight. The authors are exceedingly well informed and draw upon a capacious command of recent history, economics, demography and culture to advance their argument. Throughout, Krastev and Holmes are also provocative, exposing shibboleths and cutting through conventional wisdom. The Light That Failed is well worth the price of admission."

“A salient and incisive analysis of the decline of Western liberalism centered on the evolution of Central and Eastern Europe after the fall of the Berlin Wall. Their lucid and cogent presentation mitigates the sense of discouragement many readers are apt to feel when reckoning with how liberalism ‘lost its way.’ Those searching for what comes next should consider this an essential resource.”

“A brilliant, original book on the crisis of modern liberalism. A must-read to understand our present discontents.”

“A sharp, polemical and ideas-packed book by Ivan Krastev, a Bulgarian-born political scientist who has witnessed and participated in the remaking of central and eastern Europe, and Stephen Holmes, an expert on the history of liberalism at New York University.”

“A brilliant explanation of the mess we are now in: Trump, nativist politics, bunkered nationalism and the failure to establish an order based on Enlightenment liberal values.”

“When the Soviet Union collapsed and communism fell, the countries of eastern Europe set out to emulate Western democracies. But, as the authors of this perceptive book eloquently relate, their attitude to liberal democracy soured amid globalisation and the financial crisis—forces that also fed the rise of nationalism in the West.”

“If you read one book to understand the state of the world today, make it this one. Aphoristic, counter-intuitive and amusing, a single page provides more insight into populism than libraries of books on Brexit or Trump.... This is an extraordinary and compelling book. Its subject matter is bleak but the deep learning, humour and humanity of its authors shines through.”

“Ivan Krastev and Stephen Holmes give an unflinchingly honest exp­lanation of what has gone wrong in the West—and the East—since 1989. Krastev and Holmes reject the idea that ‘reactionary authoritarianism and nativism will inherit the earth,’ and suggest that a chastised liberalism, having recovered from its aspirations to global hegemony, remains the political idea most at home in the twenty-first century.”

“Two academics and policy experts bring considerable erudition to the conundrum of why anti-liberalism has gained currency since the fall of the Soviet Union. An informative study that conveys a subtle but powerful argument for the attraction of anti-liberal populism.”

"This is a book about copying that makes an original argument. In doing so, it reminds us that liberal democracy depends not on mechanical processes but on human originality."

"A bracing analysis of post-Cold War politics, upending cherished assumptions, and forcing us to look afresh at the complex dialectic of liberalism and illiberalism."

"This is a book about imitation by a couple of utterly inimitable authors. It is the most original explanation I've read of the self-destruction of the liberal West as universal utopia. Its analysis is rooted in an unparalleled understanding of the resentment fuelled revolt (and revolting resentment) of political elites who sought to ape the West, and ended up loathing it for that very reason. Scathing yet fair.”

– Peter Pomerantsev, author of Nothing Is True and Everything Is Possible

"Witty, incisive, devastating: an unforgettable analysis of why the light of liberalism failed in Eastern Europe, and why resentment towards imitation of the West has fueled the furies of the populist revolt.”

"Krastev is one of Europe’s most interesting public intellectuals."

"Krastev’s beautifully lucid After Europe packs an enormous amount of wisdom into a very short space."

"Ivan Krastev is one of the most interesting thinkers of our time. A juggler of paradoxes, an assailer of conventional wisdoms—you may not always agree but you will never be bored."

"Holmes is one of America’s most brilliant political philosophers."

– Tzvetan Todorov, author of 'Imperfect Garden: The Legacy of Humanism' [previous praise for the authors]