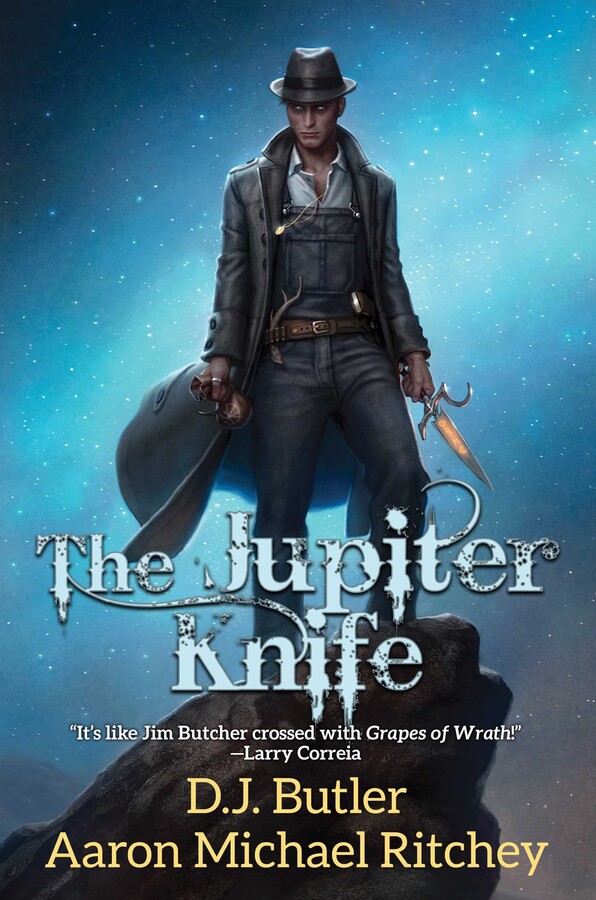 EVEN GHOSTS NEED HELP FROM A CUNNING MAN. A new novel in the Cunning Man series from Dragon Award-nominated author D.J. Butler and Aaron Michael Ritchey.

Hiram and his son Michael are dowsing a well in Eastern Utah when they hear a cry of help from the ghost of a small boy, torn to pieces by wild animals. Before they can even begin to look into that tragedy, however, a prosperous local rancher is murdered right before their eyes.

In an attempt to both help the ghost and find the killer, Hiram and Michael must navigate an eccentric cast of characters that includes failed bank robbers, a seductive fortune-teller, an inept sheriff, a crazy prospector, and a preacher with an apocalyptic grudge against the Roosevelt administration.

The mystery, however, isn’t just in the hearts of men. There’s an astrological puzzle that Michael, now his father’s apprentice, must solve. Meanwhile, the murderer is moving slowly against Hiram and Michael, forcing them into a trap from which there is no escape.

About The Jupiter Knife:
“It’s like Jim Butcher crossed with Grapes of Wrath!”—Larry Correia

“Butler and Ritchey return to Depression-era Utah for a second thrilling tale of murder and folk magic (after The Cunning Man). . . . The play between Hiram’s earnest Mormonism and the more secular Michael’s growing unease with folk magic adds depth to the father-son dynamic, and the false leads and eccentric side characters make for a delightful mystery. This well-crafted historical fantasy is sure to please.”—Publishers Weekly

About prequel The Cunning Man:
“An attempt at charity during the Great Depression turns into a protracted fight against supernatural forces in this admirable paranormal mystery. . . . the richly imagined magic system and glimpses of Mormon culture create a fully realized world. Historical fantasy fans will delight in the zigzagging plot of this mystery.”—Publishers Weekly

"An amazing tale that grabs you by the throat and won’t let go! Butler & Ritchey are a literary force to be reckoned with! Hit that download button and grab your copy now! The Cunning Man will never let you go!"—Sherrilyn Kenyon, #1 New York Times Best-selling author

Praise for D.J. Butler:
“Butler follows Witchy Eye with a satisfying second tale of a magic-filled early America. . . . Deep and old magic influences both places and characters, and the story is tightly focused on the determined Sarah . . . Fans of epic and alternate historical fantasy will savor this tale of witchery and intrigue.”—Publishers Weekly

"For readers who love history-based fantasy, steampunk, or urban fantasy . . . this series that gives the genre a new twist."—Booklist

“Excellent book. I am impressed by the creativity and the depth of the world building. Dave Butler is a great storyteller.”—Larry Correia

“Witchy Eye is an intricate and imaginative alternate history with a cast of characters and quirky situations that would make a Dickens novel proud.”—Kevin J. Anderson

"Butler’s fantasy is by turns sardonic and lighthearted; ghoulish shadows claw into the most remote areas and heroism bursts out of the most unlikely people. Sarah is the epitome of the downtrodden hero who refuses to give up until she gets what she needs, and her story will appeal to fantasy readers of all stripes."—Publishers Weekly

"David's a pro storyteller, and you're in for a great ride."—Larry Dixon

". . . a fascinating, grittily-flavored world of living legends. Hurry up and write the next one, Dave."—Cat Rambo

"This is enchanting! I'd love to see more."—Mercedes Lackey

"Witchy Eye is a brilliant blend of historical acumen and imagination, a tour-de-force that is at once full of surprises and ultimately heart-warming. This is your chance to discover one of the finest new stars writing today!"—David Farland

"[A] unique alternative-history that is heavily influenced by urban and traditional fantasy and steeped in the folklore of the Appalachians. . . . Fans of urban fantasy looking to take a chance on something with a twist on a historical setting may find this novel worth their time."—Booklist

D.J. (“Dave”) Butler grew up in swamps, deserts, and mountains. After messing around for years with the practice of law, he finally got serious and turned to his lifelong passion of storytelling. He now writes adventure stories for readers of all ages, plays guitar, and spends as much time as he can with his family. He is the author of City of the Saints, Rock Band Fights Evil, Space Eldritch, and Crecheling from Wordfire Press, and Witchy Eye, Witchy Winter, and Witchy Kingdom from Baen Books. Read more about Dave and his writing at http://davidjohnbutler.com, and follow him on Twitter: @davidjohnbutler.

Aaron Michael Ritchey is the author of a bunch of novels and his short fiction has appeared in various anthologies and online magazines. In 2019, ARMAGEDDON GIRLS (The Juniper Wars Book 1) was a Dragon Award Finalist.

He's spoken at writing conferences and sci-fi/fantasy conventions across the U.S., including the Pikes Peak Writers Conference, the RMFW Gold Conference, and the Colorado Teen Lit Conference. He lives in Colorado with his wife and two ancient goddesses posing as his daughters.

For more about him, his books, and how to overcome artistic angst, visit www.aaronmritchey.com. He's on Facebook as Aaron Michael Ritchey.