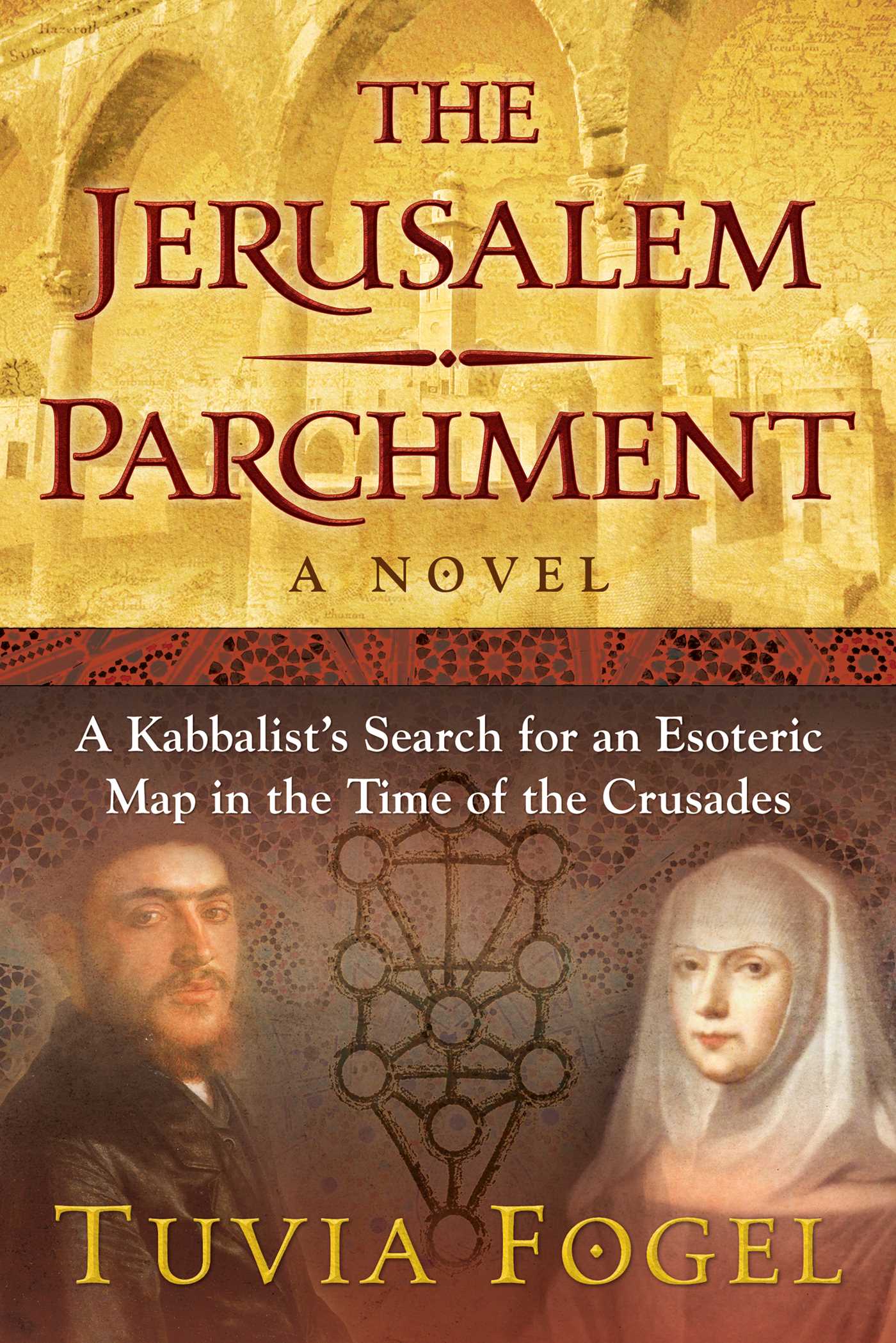 By Tuvia Fogel
LIST PRICE $11.99
PRICE MAY VARY BY RETAILER

• Centers on the search for the Parchment of Circles, an ancient map said to lead to mystical wisdom that challenges the story of Christ’s resurrection, validates the Cathar faith, and serves as the Templars’ blackmail against the Church

• Includes a complex cast of characters including a rabbi and nun who fall in love, St. Francis of Assisi, Knights Templar, the Pope, and the Sultan of Egypt

Set in the 13th century, this sweeping historical novel opens on the island of Torcello, outside Venice, in 1219, after the Crusaders have lost possession of Jerusalem. Yehezkel, a young yet revered kabbalist and student of Maimonides, is on the island for a secret meeting of rabbis. He is chosen to travel to Jerusalem to seek definitive proof of the Talmud’s antiquity, a search that grows to include the hunt for the mysterious Parchment of Circles. This ancient map could not only help Yehezkel’s quest, but also lead to explosive evidence about Christ’s resurrection that would destroy the Roman Church.

Before leaving the island, Yehezkel rescues a young Cistercian abbess from drowning in the Venetian Lagoon. Galatea, the beautiful nun, has been plagued by mystic visions and prophetic dreams throughout her life, leading her to become a devotee of Hildegard von Bingen. Driven by premonitions of an “enigma in Jerusalem,” she abandons her monastic life and the orthodoxy of the Church and joins Yehezkel on his pilgrimage.

On the way to Jerusalem, after being shipwrecked on Crete, the two meet St. Francis of Assisi in Cyprus and join him across the lines of the Fifth Crusade in his attempt to convert the Sultan of Egypt. Over the year-long trip, they also fall in love.

But the rabbi and the nun are not the only ones seeking the Parchment of Circles: The Pope sends his agents in search of it, and the Knights Templar are also in pursuit of the Parchment, for the ancient map serves as the Templars’ blackmail against the Church. What none of these deadly adversaries know is that the Parchment leads to an even more startling secret with profound religious significance for the future of humanity. It’s not a question of who finds it first, but who survives to unlock the Parchment’s secrets.

And Let Them Have Dominion

“The Talmud calls Jesus a magician,” began Yehezkel, “who cured people with a power he’d acquired. A pronouncer of Names, a drawer of circles--in effect, a Kabbalist! Well, a rabbi in Gerona teaches that the Incarnation and the Trinity arose from mistaken interpretations of kabbalistic concepts that were correct in themselves. In other words, Jesus wasn’t a magician, but a Kabbalist who had taken a wrong turn, a rabbi whose Kabbalah was full of errors.”

“After showing me the Parchment of Circles, you can ask me anything you wish, Father!”

“Well, just like I had no rest until I discovered where circular maps of Jerusalem originated, there’s a mystery concerning Jesus that has plagued me since I first read Saint John’s Gospel.”

His audience of a Christian, a Cathar, and a Jew leaned forward, intrigued.

“In the last chapter of his Gospel, after the Resurrection, John says that Jesus went to the shores of the lake, and with his help some disciples caught 153 fishes.” He repeated, “One hundred and fifty three fishes. John is a dozen verses from the end of his tale; it’s the last thing Jesus does in this world, so how could a detail like a precise number be devoid of significance? And in a Gospel as riddled with symbols as John’s!”

He paused, not really daring to hope for a solution. “I’ve played with that number for decades, as have others before me, but this idea of Jesus as a Kabbalist changes things. What if Saint John was one, too? Tell me, Rabbi, can gematria be used, how shall I put it, backward? Can a number lead to a particular word?”

“Mmmm . . . John’s Gospel is in Greek,” said Yehezkel. “I’ve heard of gematria applied to Greek, but secrets can only be apprehended through things like gematria in Hebrew, the Holy Tongue of Creation.”

“But didn’t Jesus speak Hebrew?” asked the Old Man, surprised. “He was a Jew, wasn’t he?”

“Yes, he was,” said Yehezkel, “but Jews then, outside of prayers and Torah readings, spoke Aramaic.”

“Still and all, could you show me how to arrive at a word from the number 153 in Hebrew?”

“Yes, I can try that, but you’ll have to fetch a wax tablet,” said Yehezkel.

Ten minutes later they followed his lesson as he played with letters and numbers.

“So, let me begin.” He scratched 1 5 3 on the tablet. “Since every letter in the Hebrew alphabet has a value, I could write 153 with four, five, or even ten letters, but I will do it with the smallest number, three. Not just because we all like a three-letter word, but because with three letters there will only be eighteen possible combinations, while with even just four letters, there would be . . . oh, dozens!”

“Wait, wait, Rabbi! How could there possibly be eighteen ways of combining just three letters?”

“I knew even you wouldn’t grasp that one at once. It’s because they’re not always the same three! You see, if the total is to be 153, then one letter--the Gimel, which is worth three--will always have to be present. But making up the remaining 150 with two letters is something I can do with six different letters! I can use 100+50, 90+60, and 80+70! On top of that, changing the order of the letters will result in a different word! Here, I’ll show you the combinations.”

He started scratching and soon the tablet was covered with figures.

“As you see, Father,” said Yehezkel, “they are eighteen. Now I’ll substitute Hebrew letters for the numbers.” He started scratching out each number and writing the equivalent letter in its place. It took him just over five minutes, and the result was a sequence of eighteen “words.”

“These are not all words,” he said with a smile. “At least, not in this cycle of the universe. They’re just all the combinations of three letters that add up to 153.” His audience was puzzled.

“Now we have to see which ones are words, and for that, I’m afraid one has to know Hebrew.”

Yehezkel began scratching out the words that meant nothing in Hebrew. The nonwords vanished under Yehezkel’s strokes. In a remote corner of their minds, the three assorted Christians wondered if they hadn’t embarked on a magical, possibly dangerous Jewish ritual. The mystery of the 153 fishes permeated the silence in the apartment.

In the end, Yehezkel raised his head, smiling. He had rubbed out all eighteen words.

“None of those words mean anything in Hebrew,” he said. “But I believe one of them does tell us what your Evangelist meant by that number. . . . You see, John knew that his readers, the ones who would wonder why Jesus’s disciples had caught exactly 153 fishes, knew Greek better than Hebrew.”

They all stared at him. The Old Man, who had toyed with the riddle for the best part of a century, wasn’t even breathing. Yehezkel wrote a single, large three-letter Hebrew word on the tablet and handed it to Galatea.

“How would you read this word, my brilliant pupil?”

“Correct, my friend! It seems the message John left the followers of Jesus in the number of fishes was the same selfless love that he had come into this world to teach them.”
Tuvia Fogel

For the last 20 years, Tuvia Fogel, the son of Transylvanian Holocaust survivors, has worked in Italian publishing, first as a non-fiction editor and then as a literary agent. Fluent in 5 languages, he lives in Milan, Italy.

“The Jerusalem Parchment is four books in one: a meticulously researched historical thriller; an old-fashioned, adventure-filled love story; a snapshot taken 800 years ago of the dialogue between the Abrahamic faiths; and a refutation of the cliché we learned in school that there were no freethinkers in the Middle Ages. As an often revisionist historian, I loved it.”

– Robert Eisenman, author of James the Brother of Jesus and The New Testament Code

“The Jerusalem Parchment is an exquisitely plotted love story amidst wild adventure that draws the reader deeply into medieval Jewish culture, Christian heresies, and the secrets hidden in the Temple Mount in Jerusalem. Searing apocalyptical obsession forges the three religions of Abraham into a believable synthesis, the Pearl that can bring world peace. This is a page-turner! I held my breath to the very end.”

By Tuvia Fogel
LIST PRICE $11.99
PRICE MAY VARY BY RETAILER