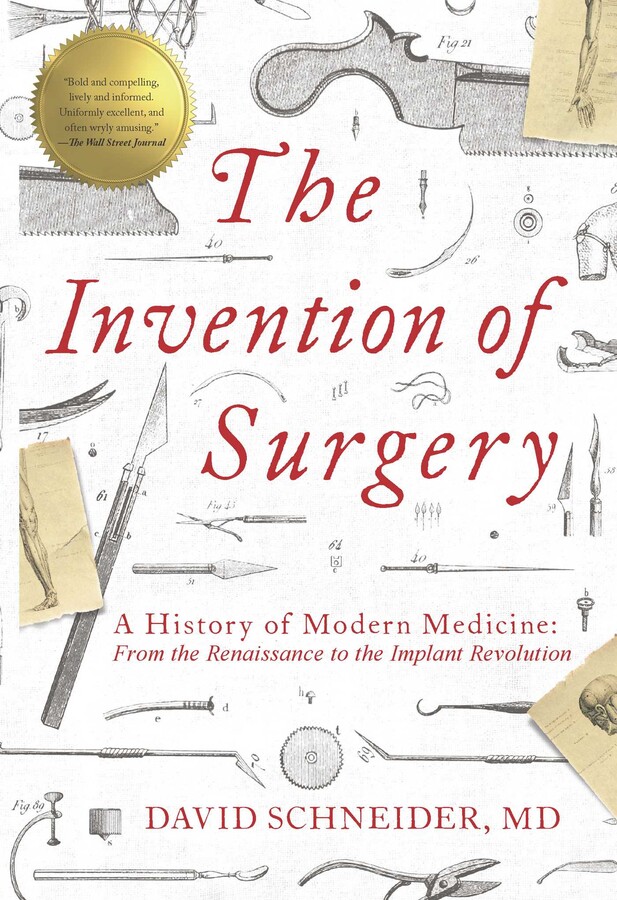 A History of Modern Medicine: From the Renaissance to the Implant Revolution

By David Schneider
LIST PRICE $28.95
PRICE MAY VARY BY RETAILER

A fascinating history of the practice of surgery from one of the leading figures in the field, chronicling centuries of scientific breakthroughs by the discipline's most dynamic, pioneering doctors.

Written by an author with plenty of experience holding a scalpel, Dr. David Schneider’s The Invention of Surgery is an in-depth biography of the practice that has leapt forward over the centuries from the dangerous guesswork of ancient Greek physicians through the world-changing “implant revolution” of the twentieth century.

The Invention of Surgery explains this dramatic progress and highlights the personalities of the discipline's most dynamic historical figures. It links together the lives of the pioneering scientists who first understood what causes disease, how organs become infected or cancerous, and how surgery could powerfully intercede in people’s lives, and then shows how the rise of surgery intersected with many of the greatest medical breakthroughs of the last century, including the evolution of medical education, the transformation of the hospital from a place of dying to a habitation of healing, the development of antibiotics, and the rise of transistors and polymer science.

And as Schneider argues, surgery has not finished transforming; new technologies are constantly reinventing both the practice of surgery and the nature of the objects we are permanently implanting in our bodies. Schneider considers these latest developments, asking “What’s next?” and analyzing how our conception of surgery has changed alongside our evolving ideas of medicine, technology, and our bodies.

Dr. David Schneider is one of the most sought-after total shoulder and total elbow replacement surgeons in the world. He has written for the New England Journal of Medicine, among other medical journals, and is also a lecturer on the history of surgery and a frequent guest on regional radio and TV programs. He lives in Boulder, Colorado.

"The orthopedic surgeon David Schneider writes in The Invention of Surgery that, as a result, by the late eighteen-hundreds 'surgeons did the unthinkable. Instead of just operating on people in extremis, at the point of death, surgeons began the practice of elective surgery.' As a surgeon, Schneider is known for his success in the replacement of entire joints, especially shoulders, and, in the later chapters of the book, he shifts his gaze to what he calls the implant revolution. 'The ability to implant foreign materials in the body would awaken the imagination of engineers, biologists, and surgeons, and would usher in one of the most significant upheavals in human history.’ "

"Bold and compelling. Lively and informed by Schneider’s fascination with the field's 'tinkerers, oddballs, and lonely geniuses.' Uniformly excellent, and often wryly amusing."

Rampaging through surgery’s history, David Schneider’s unique take on its heroes and their achievements is cut with poignant, pithy stories from his own experience of repairing our bodies. He celebrates the audacity of putting something foreign inside of us, ruminates on its current costs and ethics, and asks us to join him on a fascinating ride into the future of implants.

"Comprehensively researched, deftly told, and radiating both intellect and passion, The Invention of Surgery is essential reading for anyone interested not only in the history but also in the future of medicine.  This book is a labor of love, and it shows."

– Frank Huyler, author of The Blood of Strangers: Stories from Emergency Medicine

"Brace yourself! The Invention of Surgery is a globetrotting historical adventure, told from the inside of the operating room. Through a series of colorful, bizarre and, at times, stomach-churning stories, Dr. Schneider reveals how the human, messy side of surgical history adds up to the wondrous advances we see today. This is medical writing at its most exhilarating."

“The most riveting passages are Schneider's recollections of his medical training and memorable patients.”

“A history of surgery that is informative, entertaining, and highly readable.”

A History of Modern Medicine: From the Renaissance to the Implant Revolution

By David Schneider
LIST PRICE $28.95
PRICE MAY VARY BY RETAILER