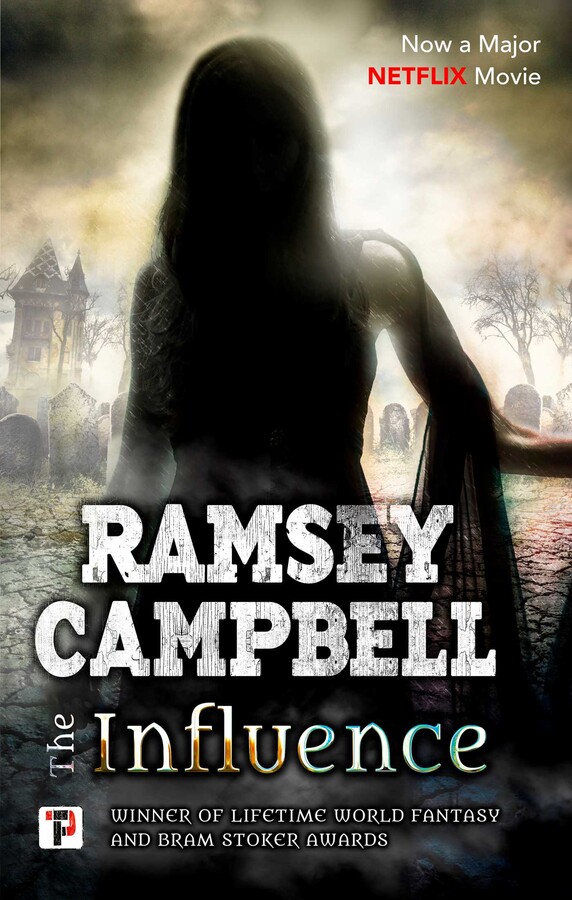 "This is a chilling work and the fullest treatment of one of Campbell's recurring themes - the psychic violence family members wreak upon one another." Publishers Weekly

Queenie is the ageing matriarch of the Faraday family, and even death can’t break her hold over her eleven-year-old granddaughter Rowan. She’s buried with a locket that contains a lock of Rowan’s hair, and soon afterwards Rowan is befriended by a mysterious uncannily intelligent girl of her own age. Only her aunt Hermione suspects how sinister this is, but will retrieving the locket save her niece? By the time anyone sees what effect the ghostly influence on Rowan is having, it may be too late for her. if the child who takes her place in the family isn’t Rowan, Rowan may be somewhere else not quite like our world…

FLAME TREE PRESS is the new fiction imprint of Flame Tree Publishing. Launched in 2018 the list brings together brilliant new authors and the more established; the award winners, and exciting, original voices.

“Britain’s leading horror writer... His novels have been getting better and better” (City Limits)

“One of Britain’s most accomplished horror writers” (Oxford Star)

“One of the best real horror writers at work today” (Interzone)

“Ramsey Campbell has succeeded more brilliantly than any other writer in bringing the supernatural tale up to date without sacrificing the literary standards that early masters made an indelible part of the tradition” (Jack Sullivan, editor of the Penguin encyclopaedia)

“One of the few real writers in our field... In some ways Ramsey Campbell is the best of us all” (Peter Straub)

“Ramsey Campbell has a talent for terror – he knows how to give you nightmares while you’re still awake... Only a few writers can lay claim to such a level of consummate craftsmanship” (Robert Bloch)

“He is unsurpassed in the subtle manipulation of mood... You forget you’re just reading a story” (Publishers Weekly)

“For sheer ability to compose disturbing, evocative prose, he is unmatched in the horror/fantasy field... He turns the traditional horror novel inside out, and makes it work brilliantly” (Fangoria)

“Campbell has solidly established himself to be the best writer working in this field today” (Karl Edward Wagner, The Year’s Best Horror Stories)

“When Mr Campbell pits his fallible, most human characters against enormous forces bent on incomprehensible errands the results are, as you might expect, often frightening, and, as you might not expect, often touching; even heartwarming” (Gahan Wilson in The Magazine of Fantasy and Science Fiction)

“Campbell writes the most disturbing horror fiction around” (Today)

“A horror writer in the classic mould... Britain’s premier contemporary exponent of the art of scaring you out of your skin” (Q Magazine)

“The undisputed master of the psychological horror novel” (Robert Holdstock)

“Campbell is a rightful tenant of M. R. James country, the genuine badlands of the human psyche” (Norman Shrapnel in the Guardian)

“One of the world’s finest exponents of the classic British ghost story... His writing explores the potential for fear in the mundane, the barely heard footsteps, the shadow flitting past at the edge of one’s sight” (Daily Telegraph)

“In Campbell’s hands words take on a life of their own, creating images that stay with you, feelings that prey on you, and people you hope never ever to meet” (Starburst)

“The finest writer now working in the horror field” (Interzone)

“Ramsey Campbell is the nearest thing we have to an heir to M. R. James” (Times)

“Campbell is literate in a field which has attracted too many comic-book intellects, cool in a field where too many writers – myself included – tend toward panting melodrama... Good horror writers are quite rare, and Campbell is better than just good” (Stephen King)

“Easily the finest practising British horror novelist and the one whose work can most wholeheartedly be recommended to those who dislike the genre... His misclassification as a genre writer obscures his status as the finest magic realist Britain possesses this side of J. G. Ballard” (Daily Telegraph)

“Good stuff. But strange; so uniquely Campbell that it might as well be trademarked” (Stephen King)

“One of the few who can scare and disturb as well as make me laugh out loud. His humour is very black but very funny, and that’s a rare gift to have” (Mark Morris in the Observer)

“He writes of our deepest fears in a precise, clear prose that somehow manages to be beautiful and terrifying at the same time. He is a powerful, original writer, and you owe it to yourself to make his acquaintance” (Washington Post)

“I would say that only five writers have written serious novels which incorporate themes of fantasy or the inexplicable and still qualify as literature: T. E. D. Klein, Peter Straub, Richard Adams, Jonathan Carroll and Ramsey Campbell” (Stephen King)

“Ramsey Campbell is the best of us all” (Poppy Z. Brite)

“Ramsey Campbell is one of the modern masters of horror… He has a genius for infusing horror into the everyday, piling up small moments of dread and confusion and fear until they become insurmountable.” (Tim Pratt in Locus)

“There are a few writers who are special. They make the world in their books; or rather, they open a window or a door or a magic casement, and they show you the world in which they live. Ramsey Campbell, for example, writes stories that, read in quantity, will re-form your world into a grey and ominous place in which strange shapes flicker at the corner of your eyes, and a patch of smoke or a blown plastic shopping bag takes on some kind of ghastly significance.” (Neil Gaiman)

“An absolute master of modern horror. And a damn fine writer at that” (Guillermo del Toro)