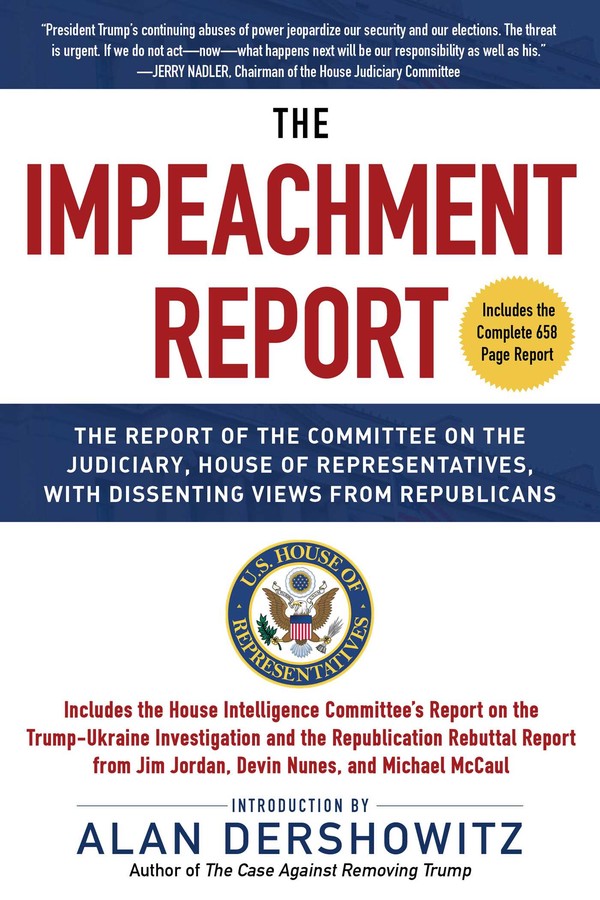 The Report of the Committee on the Judiciary, House of Representatives, with Dissenting Views from Republicans

By U.S. House Committee on the Judiciary
Introduction by Alan Dershowitz
LIST PRICE $16.99
PRICE MAY VARY BY RETAILER

This groundbreaking report—released by the US House Committee on the Judiciary, chaired by Jerry Nadler—contains the results of the impeachment inquiry into President Donald Trump’s actions as he sought for Ukraine to announce investigations into Hunter Biden, as well as an explanation of the committee's process and its justification for recommending two articles of impeachment against Trump, abuse of power and obstruction of Congress.

This new report, separated into four parts, details the process by which the House Intelligence Committee investigated the case against Trump. Part Two is dedicated to examining the standards of impeachment laid out in the Constitution. Part Three delves into the proof and details of the Democrats' case that Trump abused the power of his office to pressure the Ukrainian government to investigate his political rival and interfere in the 2020 presidential election. Finally, Part Four makes the case that President Trump obstructed Congress's ability to hold the executive branch accountable by defying House investigators' requests for documents and testimony.

Besides including the House Judiciary Committee's full report, The Impeachment Report also presents the Dissenting Views from Republicans, the findings of the Intelligence Committee’s investigation in the full original impeachment report, the articles of impeachment themselves, a rebuttal report from Republican representatives that disputes the process and results of the Democratic investigation, and an introduction by esteemed attorney Alan Dershowitz. It is the ultimate resource for anyone who wants to know whether impeachment is warranted, and is a critical text in the ongoing back-and-forth battle to protect American democracy.

Alexander Hamilton warned that in the context of impeaching a president, “the greatest danger [is] that the decision will be regulated more by the comparative strength of parties, than by the real demonstrations of innocence or guilt.” He worried that impeachment “will seldom fail to agitate the passions of the whole community, and to divide into parties more or less friendly or inimical to the accused.”

In order to avoid these dangers, and assure that no president could be impeached without broad bipartisan support, the framers of our constitution deliberately made it difficult to impeach and remove a duly elected president based on one party having a temporary majority. They imposed four daunting prerequisites—barriers—to impeachment, and another even more daunting barrier to removal (a two-thirds supermajority). To be found guilty (Hamilton twice used the word “guilt” in discussion impeachment) of an impeachable offense, a president must have committed “treason, bribery or other high crimes and misdemeanors.” If he did not commit at least one of those designated offenses, he could not constitutionally be impeached, regardless of how bad a president he was in the eyes of a majority of the House of Representatives. Even if a president committed one of the specified offenses, Congress retained the discretion not to impeach him if his offenses did not rise to the level of abuse of office. In other words, commission of one of the designated offenses was a necessary but not sufficient condition for impeachment. Abuse of office, coupled with a designated crime, would be both necessary and sufficient, but abuse of office, without a designated offense, would not be enough to impeach.

The words chosen by the framers have meanings that were well understood at the time.

Treason is defined in the constitution. Bribery had a long common-law meaning. Both are serious high crimes. When the framers modified...

U.S. House Committee on the Judiciary

The Report of the Committee on the Judiciary, House of Representatives, with Dissenting Views from Republicans

By U.S. House Committee on the Judiciary
Introduction by Alan Dershowitz
LIST PRICE $16.99
PRICE MAY VARY BY RETAILER