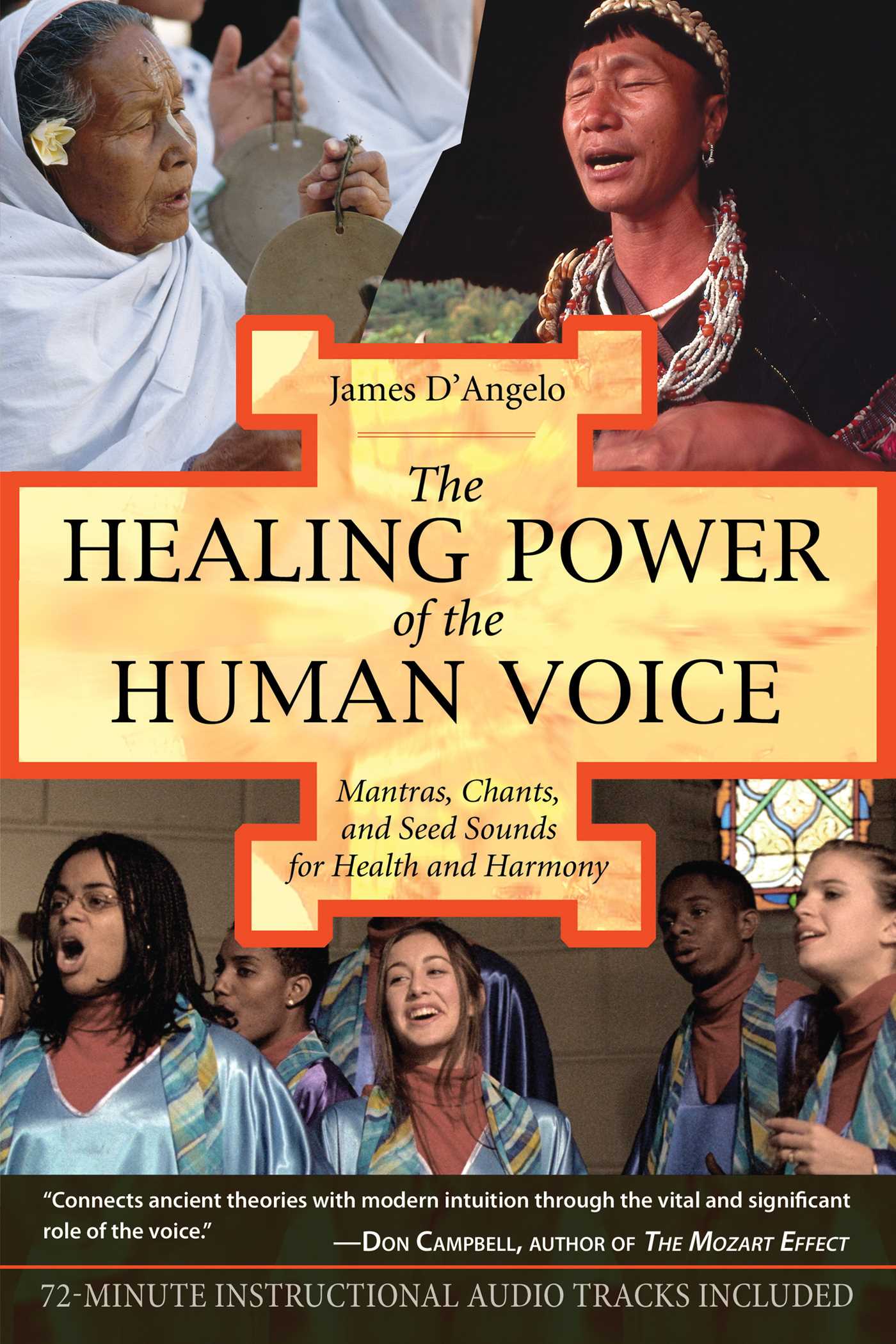 By James D'Angelo
LIST PRICE $10.99
PRICE MAY VARY BY RETAILER

• Explains the emotional meanings and healing attributes of human vocal expression, from vowels and consonants to natural sounds such as laughter or sighs

• Contains chants and mantras from cultures around the world

As infants and children we use our vocalizations to express our needs and emotions. As we grow older these vocalizations become confined to language. The suppression of emotional sounds because they may be considered childish or undignified is quite commonplace in Western cultures. Yet when done with vigor, the sounds made by laughing, groaning, humming, keening, and sighing hold within them great power for healing.

In The Healing Power of the Human Voice James D'Angelo introduces the concepts behind sound healing and provides simple, practical exercises for beginners. He explains in detail the meanings and healing attributes of the whole range of human vocal expression, from vowels and consonants to the natural sounds of laughter or sighs. He praises the power of singing and reveals the ways in which group singing can contribute to physical and mental health. He also presents authentic classical chants and mantras from cultures around the world and shows how we can combine various vocal sounds to form our own mantra to help clear chakra blockages. All of the sounds discussed, as well as the techniques for producing overtones, are placed in a ritualized context and are accompanied by simple movements to enhance tuning the body toward inner harmony, health, and peace.

There is such a wide range of natural vocal sounds, some caused by heightened emotions and others produced by the physical body such as yawning, sneezing, and belching. The vibrations of emotion can be turned into a medicine, shaking loose rigid patterns both in body and psyche. Such sounds are diffused through the body and even returned to it in circular fashion through the ears and the nervous system.

One of the recommendations is that therapeutic soundwork be done at the beginning of the day and/or at the end of the workday. However, this is not to say it could not be done at other times. Natural sounds, because they are about releasing emotions safely, can be put to use at any moment of your waking life when you feel the situation calls for it. So if feelings of depression, anxiety, anger, sorrow, or fear began to surface in you, you could use soundwork to alleviate these conditions before they overwhelmed you.

Yawning
Yawning is not connected with our emotions. Most of us associate it with tiredness, a running down of energy. It need not be accompanied by sound because essentially it is an involuntary action of drawing in a very deep breath. In yawning the body mechanism is trying to replenish the loss of energy. That is, the deep, sudden rushes of air are providing a quick fix of oxygen, the Prana, revitalizing the whole system. Georges Gurdieff, a well-known teacher of Eastern esoteric knowledge, taught that we have within us large and small energy accumulators that are interdependent, and yawning is a means of pumping energy into the small accumulators.

At the same time, yawning allows for the relaxation of the throat and tongue and the stretching of the jaw which makes it ideal as a preparation for toning, chanting, singing, and overtoning. If you really yawn, you have to open the mouth as wide as possible both for the deep intake and the release of air. It comes into the realm of natural sounds when you produce an AH on the outbreath, the AH forcing you to have a very wide and rounded mouth. The AH sound arising in the heart will also have the effect of undoing any tension.

So either you act out yawning deliberately when tiredness comes over you or when you want the mechanisms of throat, tongue and jaw to be very relaxed prior to any voicework. In either case it is a healthful thing to do.

Exercise
1. First practice opening your jaw as wide as possible while keeping a rounded mouth. Keep the jaw open for five seconds, imagining the sound of AH, and then close it slowly, keeping the mouth in the rounded position. Do this a few times before actually doing the yawning.
2. Now stand with your feet shoulder-width apart. Place your closed hands above your shoulders, facing forwards. Draw in air quickly and deeply through an ever-widening mouth, thrusting out your belly at the same time. Do not hold your breath. On the pushing out of the breath, make the sound of yawning. That is, produce a somewhat breathy AH sound from deep within your throat as though you were gargling. At the same time stretch out the arms sideways and upwards as you would for a natural yawn and open up the hands. Do this with eyes closed. Hold this outstretched position for a few moments, breathing normally. Slowly draw the hands back to the original position. Do it anywhere between 5 and 10 times.

Humming
In certain Eastern forms of meditation the sound of MMM closes such sacred seed syllables as OM, HUM, HAM and RAM, and in the West it forms an integral part of AMEN. It is the agent that helps to draw us into a profound state of quietude, relaxation and peace. Its comforting sound leads us deep within where we can find our true sense of self and therefore have great realizations and original ideas. In this respect it has a strong link with the brow chakra, the seat of insight. It is no accident that we emit a kind of humming sound when we make a discovery, when something is revealed to us or understood, or when we are in agreement or in tune with another person’s thoughts. The humming MMM is a life-affirming sound, one that almost universally mothers use to still their children as in a lullaby or adults produce in a state of contentment.

The MMM consonant has a rich buzzing noise like a bumble bee that can bring great balance to our emotions, diminishing our egotistical side by slowing down the lesser, moving mind and tapping into higher mind. It can also shake loose in a safe and happy manner emotions that need releasing.

Exercise
To allow the natural sound of MMM to do its best work, draw in a slow, deep breath and try different tones from high to low to see which one resonates your head region most vibrantly. The object is to vibrate as much of your body as is possible, starting with the head region and moving down through the chest. See how far the sound can extend itself throughout the body. Make the sound strong, buzzy and bright by putting a smile on your face. To hear the sound in its full resonance, place the index fingers lightly over your ears with the rest of your hand embracing your face. This ritual can be done either sitting down or standing up. Have gaps between the hummings where you will breathe normally and observe what happens. Then take in another slow, deep breath just before emitting the next prolonged MMMM sounding. And so on. It would not be surprising if you felt like falling asleep. This would be a good sign of equanimity within yourself and would show that you have slowed down the physical and mental processes while balancing and purifying the emotions.
James D'Angelo

James D'Angelo, Ph.D. is an American musician, composer, educator, and workshop leader based in the United Kingdom. Since 1992 he has developed and led therapeutic sound and movement workshops in Great Britain, Europe, and the United States, and he is considered an authority on sound healing therapies.

"James D'Angelo's joy in sound and silence, and his reverence for the sacred, burst through every sentence."

“An excellent book full of pertinent information and practical exercises on the uses of the voice as a healing instrument. I highly recommend it!”

“Humans have a unique, dual relationship with sound--we can both hear it as well as make it. James D’Angelo is an engaging and insightful guide to the sounds we produce. The information and exercises in The Healing Power of the Human Voice provide great value for anyone seeking equanimity and wellness in their lives.”

– Joshua Leeds, psychoacoustic music producer and author of The Power of Sound and Sonic Alchemy

"Connects ancient theories with modern intuition through the vital and significant role of the voice."

"This is an excellent starting point for beginners and also holds useful ideas and practices for those who have been involved in working with the voice for some time."

". . . [this book] is a profound reminder that the voice is both a resonator of the immanence of spirit as well as a pathway to transcendence."

By James D'Angelo
LIST PRICE $10.99
PRICE MAY VARY BY RETAILER