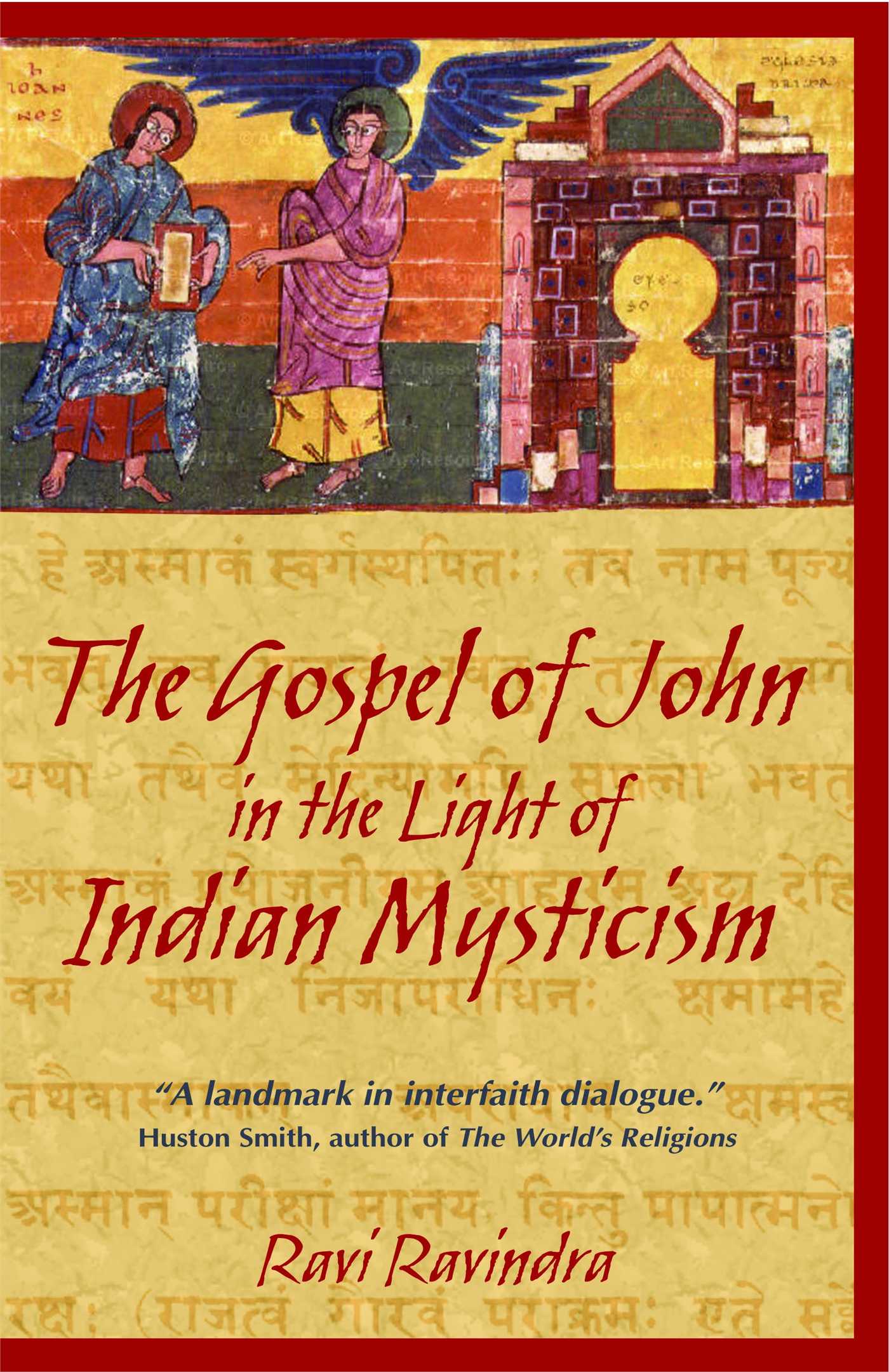 Explores St. John’s Gospel from an Eastern perspective to reveal the interconnectedness of all faiths and the need for interfaith dialogue

The Gospel of John is different from the other canonical gospels in its overall point of view concerning Jesus Christ and his mission on earth. It is much more cosmological in scale and mystical in nature and has long been considered more esoteric. The Gospel of John in the Light of Indian Mysticism presents an unusual and rewarding exploration of this Christian text from a Hindu perspective as Ravi Ravindra takes us into the heart of St. John’s words, eloquently and convincingly revealing the interconnectedness of all faiths and the growing need in today’s world for interfaith dialogue. For those concerned with the emergence of a universal spirituality, Ravindra provides a source of light, a translucent pool of wisdom that offers from its depths an immense and lasting spiritual vision.

Since I was brought up in India, my psyche is naturally Indian in its early formation. When I read the Gospel According to St. John, I am struck by many similarities with the Indian traditions, and, of course, by many differences. In trying to understand the Gospel, I have found some Indian texts specifically helpful in bringing a new way of looking at a metaphor or in enlarging the appreciation of something that has been understood. I am persuaded that the major division in the human psyche is not horizontal or regional, dividing the Eastern from the Western soul; but that it is vertical and global, separating the few from the many, and the spiritual, inner and symbolical way of understanding from the material, outer and literal one--culturally as well as in each human soul.

My understanding of the Hindu tradition is that it aims at Sanatana Dharma (eternal order) of which at its best it is one representation, and that the tradition is most fulfilled only when it succeeds in leading one to the Truth beyond itself and beyond oneself, to experience It and to become one with It. One is born prakrita (natural, common, unformed); one must attempt to die sanskrita (well sculpted, cultured, educated). The truly educated person, the formation of which is the real aim and meaning of any spiritual path, of any yoga, is the one who is internally rightly ordered, and, in the words of the Bhagavad Gita (6:29), “sees the Self in everyone, and everyone in the Self, seeing everywhere impartially.”

Everywhere, the one Truth and one Being, or simply the One, has manifested itself in many truths, myriad beings and many selves, corresponding to different times, places, cultures, religions and needs. According to the Shatapatha Brahmana (I,7,2,1-5), when a person is born, simultaneously are born obligations to the Gods, to the sages, to the ancestors, and to the community. Out of these, the obligation to the sages is met by studying the Veda (literally, ‘sacred knowledge’); this is how we repay our debt to them.
We are living at a special moment in world history: for the first time now it seems to be possible for us to be free from our cultural isolation and to become heirs to the wisdom and truth as much of the Christ as of Lao-tzu, of Krishna and of the Buddha, if we would. In the global village that we live in, as we have access to the words and teachings of more sages, our obligations are also increased. I hope to meet a part of my obligation to the Christian sages by studying the Gospel According to St. John, which represents the Christian Veda par excellence.

However, in paying our debts to the sages and the saints, we must not forget a yet higher obligation: that to the Vastness beyond. It is This that the sages behold and to which they themselves are beholden; they show us that the Kingdom is neither in this place nor in that, but in each individual soul that is centered in the present moment on the only One Who Is. As Christ said, “Believe me, woman, an hour is coming when you will worship the Father neither on this mountain, nor in Jerusalem. An hour is coming, and is already here, when those who are real worshippers will worship the Father in spirit and in truth. Indeed it is just such worshippers the Father seeks. God is Spirit and those who worship Him must worship in spirit and in truth” (John 4:21,23-24).

The Word became flesh and dwelt in us, and we have seen his glory, such glory as befits the Father’s only Son, full of grace and truth. (1:14)

Here we encounter the central core of spirituality, the very heart of the practice: the Incarnation. Precisely because of its profundity, it is a mystery, highly cherished wherever the word mystery has not been denuded of its spiritual power. We have become habituated to the notion of mystery as in a murder mystery or a detective novel, in which the solution is found either when we accidentally stumble upon a missing clue or when we cleverly deduce it from other information. But, as far as spiritual mysteries are concerned, no amount of data or clues or information or cleverness at reasoning can lead us to solve the mystery. Spiritual mysteries always remain mysteries; they cannot be solved, simply because their mysteriousness is not a result of any missing data; it arises from their fullness which cannot be wholly comprehended by our ordinary mind. On the other hand, if we let such a mystery play its proper role, and by submitting to it in contemplation we allow it to work in us, we can ourselves be raised to the level of a higher mind, and higher still, without end. At that vantage point of the right mind, the mystery is not solved, but the knots of the mind are resolved. And the mystery has been instrumental in this movement as a koan can be in the practice of Zen. A genuine mystery carries with it the living water for a true baptism, an initiation to another level of being, a new birth.
Ravi Ravindra

Ravi Ravindra, a native of India, emigrated to Canada following his early education, and, in 1977, was made Member of the Institute of Advanced Study in Princeton. He served from 1978 through 1980 as the Founding Director of the Threshold Award for Integrative Knowledge and, in 1989, was the pilot Professor of Science and Spirituality at the California Institute of Integral Studies. Dr. Ravindra at present holds the position of Professor Emeritus at Dalhousie University, in Halifax, Nova Scotia, Canada, where he has served as Chair of Comparative Religion, Professor of International Development Studies, and Adjunct Professor of Physics. In addition to his study of the world's great traditions, Ravi Ravindra's spiritual search has involved him in the teachings of J. Krishnamurti, G. Gurdjieff, and Zen. The author of numerous books on religion, mysticism, and spirituality, Dr. Ravindra lives in Halifax, Nova Scotia.

"Catches the tone and spirit of St. John and this gospel’s profound coherence with other traditions, particularly the Hindu tradition in India and of course the Bhagavad Gita."

"Looking at Christ through Hindu eyes, Ravindra's 'external' view of Christ is in ways more faithful to Christian history than much Western Christology now manages to be. This makes Christ the Yogi something of a landmark in interfaith dialogue."

"The book's real value lies in bringing readers into contact with the Gospel itself, highlighting its yogic nature, connecting us to the mystery that leads to rebirth in the Spirit."

"The main qualification for an interpreter of a religious text is the ability to discern true wisdom--something Ravindra certainly can do. . . . Christ the Yogi is one of the best studies on a book of the Bibles that I have read. It has opened aspects of John's Gospel that were previously closed to me."

"A loving pondering over one of the most beautiful and probably most esoteric of the Four Gospels of the Christian tradition."

"This nonsectarian evaluation of Jesus and the Gospel of John is another good example of the fruits of interfaith dialogue."

“A dazzlingly brilliant spiritual and cross-cultural study of the most mystical of the books of the Bible, the Gospel of John. Few will finish this book unchanged, either intellectually or spiritually.”

– Robert Ellwood, author of The Cross and the Grail

“Shows the benefits that cross-cultural perspectives can bring, helping readers to see with the heart as well as the head. . . . The best study of St. John’s Gospel that I have found.”

"In this new revision, Mr. Ravinda is surely helping to establish an interfaith sensibility in which beauty and truth in all religions can be simultaneously appreciated and embraced."

“Through the Gospel of John and references to the Bhagavad Gita, which are both cosmological and mystical, the author, in this book, brings about a cross-cultural spiritual presentation, which is brilliant and electrifying.”

“If you’re looking for an in-depth, metaphysical analysis of the New Testament’s Fourth Gospel, you won’t do any better than Canadian Physics and Comparative Religion Professor Ravi Ravindra’s The Gospel of John in the Light of Indian Mysticism.”