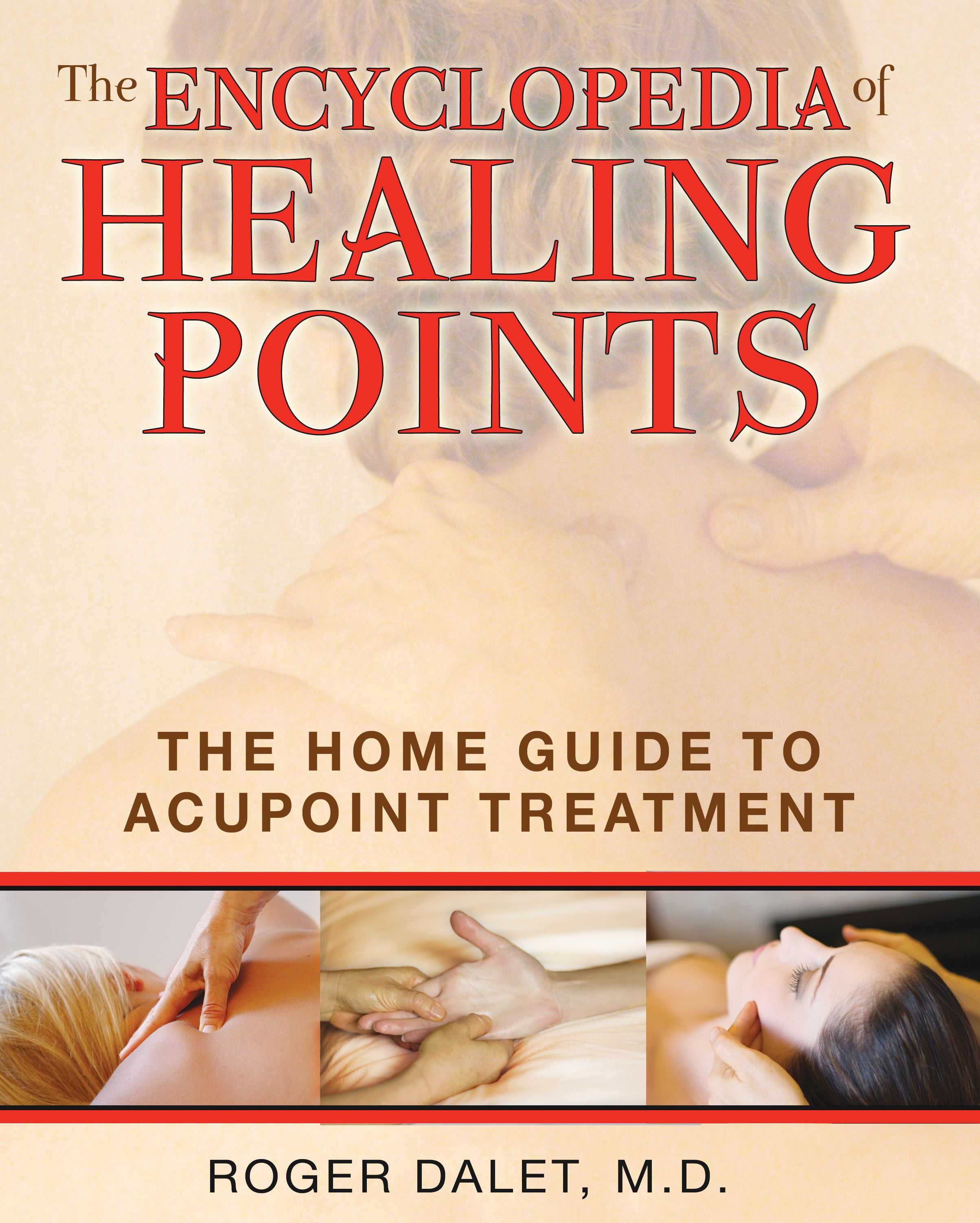 By Roger Dalet
LIST PRICE $29.95
PRICE MAY VARY BY RETAILER

• Offers a safe and effective alternative, or supplement, to standard allopathic medical treatment and pharmaceuticals

A safe and effective technique for finding relief from pain and illness--be it a cold or flu, asthma or arthritis--is, quite literally, right at your fingertips. We have all experienced how the simple power of touch can bring such comfort and relief. Massaging specific healing points used in acupressure directs this powerful energy in a way that stimulates the body’s own natural healing ability.

Illustrated in full color, The Encyclopedia of Healing Points presents a complete guide for treating more than 150 diseases and disorders--from chronic conditions such as arthritis, diabetes, and heart problems to more minor problems such as tinnitus, insomnia, and stage fright. Each treatment protocol includes Dr. Dalet’s guidance on how acupressure can best help the situation--whether it is capable of completely curing a condition or whether it should be used in conjunction with other healing modalities. A valuable resource for any home, the acupressure treatments presented in this book can provide immediate relief to pain and injuries as well as be used preventively. Most important, they offer an effective method of self-care and a way to provide comfort and relief to ailing loved ones--especially the delicate immune systems of children.

In addition to the commonly known and prescribed acupressure points, Dr. Dalet includes important new acupoints discovered by contemporary Chinese medical researchers that address ailments resulting from our more sedentary lifestyles and use of computers, such as obesity and eye strain. He also recommends the most effective options for stimulating the points, including devices for electrical stimulation.

What could be more banal than the illness that affects what many consider the most noble organ of the body: the head? In reality, the medical terms describing head colds localize it more precisely as coryza or acute rhinitis, which both pertain to inflammation of the mucous membranes inside the nose.

Who is not familiar with the symptoms of a cold? A sudden onset announced by a burning sensation in the nose and throat, constant sneezing, nasal blockage followed by a stream of fluid that starts colorless but becomes green or yellow as it becomes more purulent. In addition, colds affect the neighboring organs. Often the eyes run, ears clog, and sometimes the cold goes down into the chest, which is to say it triggers an attack of bronchitis. But under normal circumstances, everything goes back to normal working order after eight to ten days.

What I described above, however, is the standard form, one you might say is benign. In a certain number of cases, things do not turn out to be so simple.

First, for nursing infants and very young children, whose lack of natural defenses, narrowness of nasal passages, and lying down position causes a flow of pus into the bronchial tubes, the digestive tract, and the ears especially, colds are a purveyor of countless childhood ear infections. (I have personally known a young child who had to undergo thirty-two paracentesis procedures, in other words, have his eardrums opened, in one winter.)

Next, colds among school-age children can amount to a veritable disability. Because they keep constantly coming down with colds their overall state of health can be adversely affected, and this can pose threats to their ongoing development, not to mention their ability to get a sound and well-rounded education.

Finally, rhinitis or nasal inflammation can become a chronic condition for some adults. Going from one cold to the next, the patient is a chronic “sniffler,” whose nasal passageways are always clogged and who always needs to blow his nose. This then becomes an illness that affects one’s entire life, by altering the sense of smell, causing constant headaches, and posing a permanent threat to the respiratory system, particularly the sinuses.

Did you know that acute or chronic colds may be the most expensive drain on the medical system and society as a whole--just for the work absences they cause?

The causes for colds are bacterial infections and viral infections (and these are legion in number!). Germs come quite quickly and additionally infect the nose and cause more suppuration of its fluids.

Many causes encourage these infections and contagions: a moist climate, pollution, tobacco smoke, and crowding (contagious diseases spread in places such as day care centers, schools, and offices) are the most frequent culprits.

But we need to add another cause to these: allergies, in other words the inherited or acquired sensitivity to a number of substances including dust, germs, and chemical products. Among these latter we have to highlight the danger posed by medicinal products in particular, especially nasal drops that are used far too often; reaching a point that constitutes abuse.

This establishes a vicious circle: infection-allergy-infection. The patient becomes the victim of a perpetual cold, and his permanently inflamed mucous membranes thicken as a result and thus become an obstruction in the respiratory tract.

The common head cold is the greatest shame and failure of contemporary medicine. Mankind knows how to fly to the moon, but we still do not know how to cure a cold! We are not even sure how to treat it. When you are using your grandmother’s recipes (protecting yourself against cold temperatures, rinsing the nose with salty water) you are at least not causing any great harm. But this is not true for vasoconstricting nasal drops; and it is certainly not true for antibiotics. Who has not known a child who is consuming antibiotics every day from October 11 to May 31 to the great distress of their digestive tract, their growth, and their teeth?

For the reasons noted above, the existence of a natural therapy that is so effective but poses no other health risks is more than welcome. Used at the very onset of a cold, stimulation of the points I’ve provided stops it “cold.” Used after the illness has become established, acupressure still relieves discomforts and is able, to a large extent, to arrest its development. For this reason, I recommend that acupressure be the technique you try first, in combination with other natural methods if desired.

When the first sensations of an incoming cold make themselves felt, an intense stimulation (five or six minutes) of the principal points should be enough to stop it in its tracks.

Once a cold has established itself, and even more so in the case of chronic nasal inflammation, it is necessary to repeat this stimulation for two to three minutes, in the morning and the evening, in order to obtain relief from nasal discomfort.

The first principal point is situated in the middle of the forehead just above the hairline (if you place the base of your index finger at the bridge of the nose, your fingertip should reach this point located in a small hollow on the brow).

The second principal point is located on either side of the nose, at the junction of the nostril and the upper lip.

The second accessory point is above the bridge of the nose, just beneath the bony ridge that is located at this level (the glabella).
Roger Dalet

Roger Dalet, M.D., is a renowned acupuncturist in France and is a doctor on staff at several hospitals. He has written a number of books on this subject, including several translated into English. He lives in France.

“I am pleased to recommend Dr. Roger Dalet’s The Encyclopedia of Healing Points for three good reasons. First, it is truly comprehensive, earning the ambitious title of ‘Encyclopedia.’ Second, it is extremely well organized and user friendly. Third, the information provided is trustworthy. It is true to both traditional Chinese medicine and contemporary energy medicine. This book is a tremendous resource.”

“Dr. Dalet’s impressive work is a major contribution to the lay person’s understanding of holistic medical care. Its strong points include concise explanations of the causes of diseases and dysfunctions, helpful distinctions between acute and chronic conditions, easy-to-use organization, and the combination of diagrams and photos to aid in precisely locating acupoints for treatment. The Encyclopedia of Healing Points sits high on my shelf of essential resources for maintaining and enhancing health.”

– Mary Bond, author of The New Rules of Posture

" . . . a tremendous resource for any bodyworker or practitioner. The content is written in lay terms and is concise, understandable, and addresses common issues."

“For anyone who wants a thorough guide to this brother practice of acupuncture, The Encyclopedia of Healing Points is a fine resource, not to be missed.”

By Roger Dalet
LIST PRICE $29.95
PRICE MAY VARY BY RETAILER