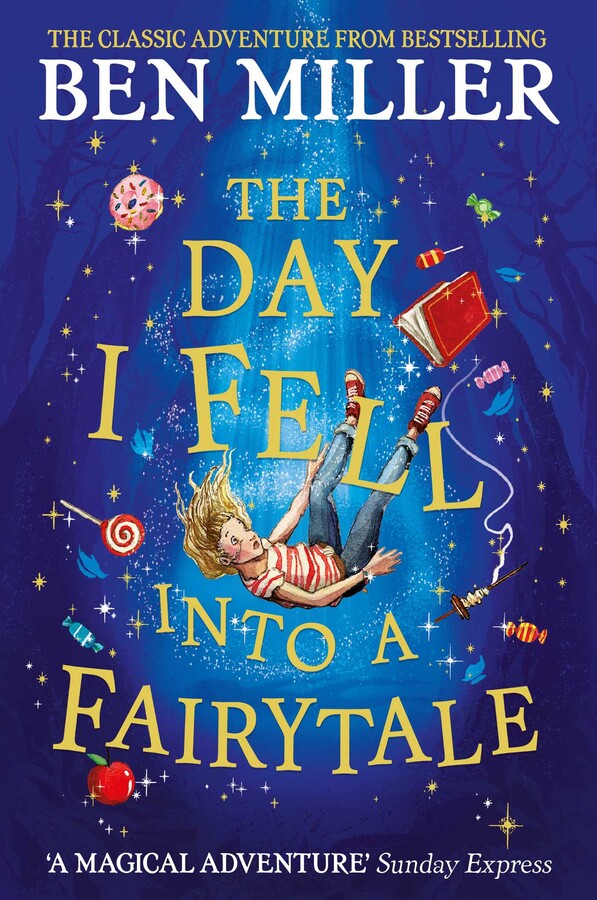 The Day I Fell Into a Fairytale

Enter a world of wonder with the new novel from Ben Miller, actor, comedian and bestselling author of The Night I Met Father Christmas. Perfect for fans of Matt Haig and David Baddiel!

Lana loves stories. Especially the ones she and her brother, Harrison, share in their make-believe games. But when Harrison decides he’s too grown-up to play with Lana she finds herself feeling lonely. Until something magical happens . . .

Hidden in the strange new supermarket in town, Lana discovers a portal to a fairytale world! But these aren’t the happy-ever-after fairytales that Lana knows, they are darker and more dangerous, and the characters need Lana’s help to defeat an evil witch. But she can’t do it alone. Can she convince Harrison to believe in stories again and journey to the world with her . . . before it’s too late?

This is a story about stories, but it’s also about a brother and a sister finding their way back to each other through the power of imagination, featuring beautiful illustrations throughout from Daniela Jaglenka Terrazzini.

“Inspired by the stories of the Brothers Grimm, this adventure will be enjoyed by fans of Anna James and Abi Elphinstone, and is great for reading aloud.” - The Week Junior

Ben Miller is an actor, director, and comedian, best known for writing and starring in The Armstrong and Miller Show and his role as Rowan Atkinson’s sidekick, Bough, in Johnny English Strikes Back.  Other recent big screen roles include What We Did On Our Holiday with Billy Connolly, and the much-loved Paddington 2 with, well, Paddington. On television, he is best known for the crime comedy drama Death In Paradise and the Netflix original series Bridgerton, which has been a huge hit worldwide.

Praise for The Night I Met Father Christmas:

'A gorgeous tale brimming with the magic of Christmas. A sheer delight for all kids both big AND small.' Ruth Jones, award-winning writer and comedian

'You can always tell when a children’s book has been written by a brilliant father because there’s a particular intimacy, warmth and mischievous humour that bubbles through it ... irresistible' Alexander Armstrong, presenter, comedian and writer

'A fire-side gem of a story' Abi Elphinstone, bestselling author

Praise for The Boy Who Made the World Disappear:

'As children's morality tales go, this is as satisfying as it gets' The Big Issue

Ben Miller is the bestselling author of magical stories for all the family: The Night I Met Father Christmas, The Boy Who Made the World Disappear, The Day I Fell Into a Fairytale, How I Became a Dog Called Midnight and Diary of a Christmas Elf. His next children's book will be released in September 2022. He is an actor, director and comedian, best-known for the Armstrong and Miller sketch show, the Johnny English and Paddington films, BBC's Death in Paradise and recent Netflix smash, Bridgerton.

The Day I Fell Into a Fairytale