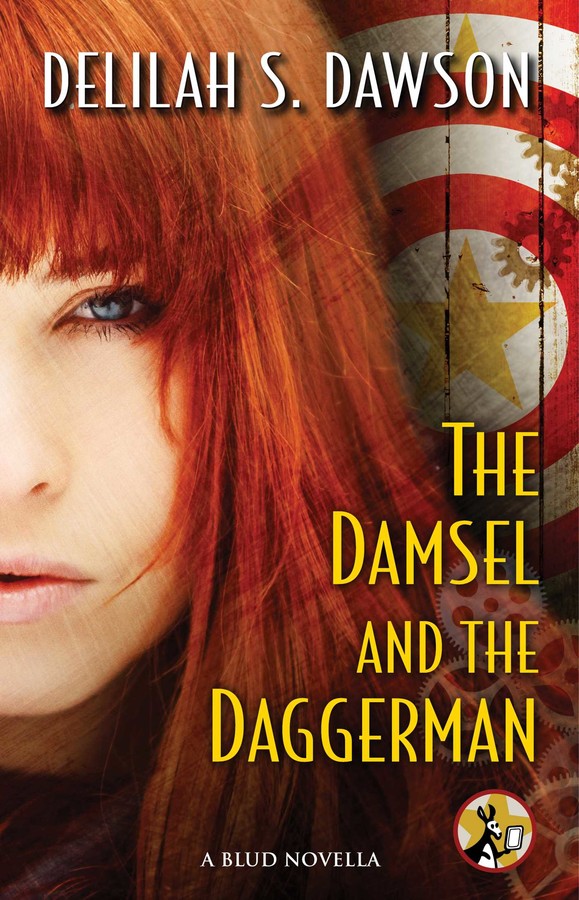 The Damsel and the Daggerman

Book #5 of A Blud Novel
By Delilah S. Dawson
LIST PRICE $1.99
PRICE MAY VARY BY RETAILER

In this “carniepunk” e-novella from the author of Wicked As They Come, a knife-thrower meets a lady journalist determined to uncover his dark and dangerous past.

Bad boy knife-thrower Marco Taresque is the hottest and most dangerous performer in the caravan. He keeps to himself until a pesky female journalist arrives, anxious to interview him about his checkered past—his last assistant disappeared under mysterious and bloody circumstances, earning him the nickname “The Deadly Daggerman.”

Unsinkable journalist and adventurer Jacinda Harville doesn’t take no for an answer, and she’s determined to wear down Marco no matter how threatening—or incredibly desirable—he might appear. He agrees to an interview—but only if she’ll let him strap her to a spinning table and throw knives at her body. How can she say no? And how can she resist him when he leans close for a kiss that strikes her more sharply than any blade? It’s the first time she’s let a man get the better of her, and she’s determined it will be the last…

Just when she thinks she can’t take any more of his games, Jacinda receives a note from Marco saying he’s finally ready to tell her the truth about what happened to his missing assistant. She sets out for an address miles away, but what she finds there turns the tables on everything she thought she knew about the tender lover who wears a smile as sharp as his knives.

As secrets are unraveled and passions take hold, Ginger realizes her hard heart has melted. But will it be too late to save Marco—and herself—from the daggerman’s dangerous past?

Every female eye was drawn to the same man, and for once, it wasn’t Criminy Stain. The ringmaster seldom came to sit around the bonfire with his carnivalleros at the end of a long day’s setup, and it had been ages since there had been any eligible fellow worth glancing at across the flames. Ever since Marco Taresque had stalked out of the moors, he’d been the topic of many a whispered conversation. And many a feverish dream in the secret cocoon of a caravan wagon.

Marco sprawled against a velvet settee that was one broken leg away from firewood. The knife thrower took up more space than most men, and the other carnivalleros naturally shifted away to accommodate the dangerous aura that surrounded him. The fire lit his dark hair; the ever-present shadow of a beard highlighted exotically high cheekbones. He used kohl as the Bludmen did, which only served to make his violet eyes smolder more ferociously, reflecting the smoke and the cherry-hot flames.

Directly opposite him, contortionist Demi Ward leaned back against a barrel and sighed with longing. She was half in love with Marco after only a few days, but she resented the hell out of those violet eyes. The romance books she’d read at home on Earth before an accident brought her to Sang had always featured supernaturally beautiful heroines with eyes in unbelievable shades that real life failed to produce. She’d resented the characters then, and now she resented the devilishly hot guy who refused to acknowledge her, or any of the carnival girls. As Demi pretended not to watch, Emerlie edged closer and closer to Marco, trying to draw him into her chatter. He merely rolled his eyes and pulled deeper on his hot cider, ignoring the tightrope walker and resident busybody—which was no mean task.

In her fantasies, Demi stood and tossed her dark hair, which was much longer and straighter and silkier than it was in real life. She walked directly through the fire like some half-daimon sorceress instead of just another Bludwoman, and one who looked deceptively young enough to be the daggerman’s daughter. In the dream, Marco’s eyes finally settled on her face, his breath catching. He stopped turning the dagger over and over in his gloved hands and stood, facing her. The world stopped. The fire ceased to dance. The other carnivalleros disappeared. It was just them, Demi and Marco, drawn to each other like bludbunnies to a scream. He held out his arms, and she walked into them, and he kissed her until her knees melted and the world dissolved in starlight. And then he threw her onto the back of a bludmare and galloped away into the night, on to bigger adventures.

“I’m tired.” Demi’s best friend and contortionist partner, Cherie, elbowed her in the ribs, and the fantasy blurred into smoke. “Let’s go back to the wagon.”

Cherie leaned close. “Stop mooning over him. Marco’s too old for you. And he’s dangerous.”

Demi groaned and leaned her head back on Cherie’s shoulder. “I know. But he’s so undeniably hot.”

“You’re just infatuated with the new shiny.” Cherie stood, shaking out curly blond hair peppered with straw, bits of silk, and dust from a day spent sinking posts, shining automatons, and raising the patchwork tent under which they now sat, protected by the circled wagons of Criminy’s Clockwork Caravan. “He’ll still be here tomorrow, you know.”

Demi squinted through the smoke. Marco’s face was lost in the flame. His expression was unreadable and far away, and his mouth turned down, just a little. It only made her want to kiss him more and taste a passion she hadn’t known in her world or in Sang, where the only guys in the caravan were freaks, loners, or boring. She’d had her eye on one of the new daimon boys, the older son of the dancing mistress, Mademoiselle Caprice. He was tall and Franchian and had an air of savoir faire that appealed to her. But once Marco arrived, Demi developed a one-track mind.

When Cherie rose and held out her hand, Demi took it and stood as gracefully as she could. Despite a day of drudgery and manual labor, she’d been careful to dress in clothes that showed off her lithe figure and accentuated the parts that boys liked to ogle. Every day, she was thankful that Criminy Stain had found her, bleeding on the moor, and brought her to the least boring life in Sang—and the one with the least frumpy clothes. Her artfully ripped lace leggings, high boots, short skirt, and corset did a good job of bringing in the customers on show nights, and now she felt the flicker of pride as male eyes snapped up around the fire to watch her stretch. Just because she wasn’t interested in the caravan guys didn’t mean they weren’t attracted to her—or that she didn’t like the attention. Even the lizard boy perked up, just a little, as she drew in a deep breath and pushed out her chest with a yawn.

Cherie swatted her and snorted. “Stop showing off. He’s not even looking. Come on, before I fall over.”

With a last, resigned look at the daydreaming knife thrower who didn’t know she existed, Demi followed Cherie to the clockwork bird guarding the carnivalleros’ tent from the outside world. It was colder beyond the gap, and they slipped past and hurried to their wagon, already shivering.

Cherie had stopped, staring out onto the moon-dappled moor, and Demi was so deep in daydreams that she nearly ran into her smaller friend. Forced to look up, she saw something on the hill above where absolutely nothing but a rogue bludbunny should have been.

“A conveyance? Out here? But we’re miles from Scarborough.”

A shadow fell over them, and Demi spun, hands automatically curling into claws. When she saw the stark figure standing guard behind them, focused on the mysterious vehicle, she relaxed.

The ringmaster’s gray eyes went as black as the night sky, his nostrils flared to scent the intruder. He bared his teeth and turned it into a reassuring smile.

“Hop into your wagon, my dears. I’ll have it sorted out in a jiff.”

Demi enjoyed a closer relationship with Criminy Stain than anyone in the caravan other than Tish, considering he had saved Demi’s life and all but adopted her. Still, she knew as well as anyone that when he was in this mood, half animal and half devil, it was best to nod and lock the door. The ringmaster would do anything to protect his caravan, and in the heat of the moment, details over who was dying weren’t always sorted out comfortably.

Inside the stuffy wagon, she put a hand against the solid wood wall and wondered what Criminy would find after he’d stalked across the moor to the curious vehicle waiting in the moonlight.

“I wish these frigging boxes had windows,” she said with a sigh. “All the fun stuff happens outside.” 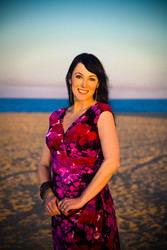 Delilah S. Dawson is the author of Hit, Servants of the Storm, Strike, the Blud series, Star Wars novels and short stories, a variety of short stories, comics, and essays, and the Shadow series as Lila Bowen. She lives in Georgia with her family and a fat mutt named Merle. Find her online at WhimsyDark.com.

The Damsel and the Daggerman

Book #5 of A Blud Novel
By Delilah S. Dawson
LIST PRICE $1.99
PRICE MAY VARY BY RETAILER

More books in this series: A Blud Novel