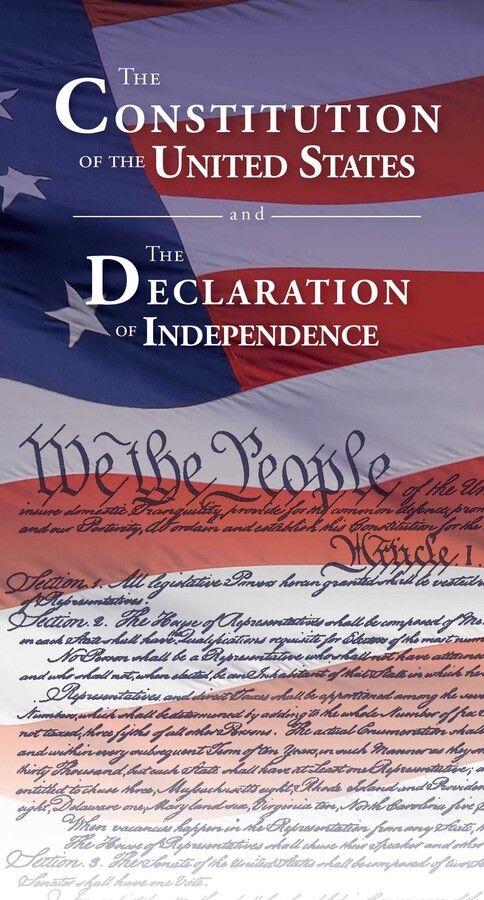 By Delegates of The Constitutional Convention
LIST PRICE $5.99
PRICE MAY VARY BY RETAILER

It’s more important than ever for every American to know exactly what the Constitution, the Bill of Rights, and the Declaration of Independence actually says. Here is the essential, 45-page, pocket-size edition.

The greatest gifts from our Founding Fathers are the two most fundamental documents in American politics. This quick, easy reference for our federal government’s structure, powers, and limitations includes:

Whether you are a Democrat, Republican, or independent, whether you are a support of Donald Trump or not, if you live and vote in the United States of America, you understand that The Constitution of the United States and The Declaration of Independence are two of the most important documents in American history. They convey the principles on which the country was founded and provide the ideals that still guide American politics today.

Signed by the members of the Constitutional Convention in Philadelphia on September 17, 1787, The Constitution outlines the powers and responsibilities of the three chief branches of the federal government (executive branch, judicial branch, legislative branch), as well as the basic rights of the citizens of the United States (freedom of speech, freedom of the press, freedom of religion, etc.)

The Declaration of Independence was crafted by Thomas Jefferson in June of 1776 and it provides the foundation of American political philosophy. “We hold these truths to be self-evident, that all men are created equal, that they are endowed by their Creator with certain unalienable Rights, that among these are Life, Liberty and the pursuit of Happiness.”

Collected here in one affordable, pocket-sized volume are some of the most valued pieces of writing in the history of our country. This edition contains The Constitution of the United States of America, including The Bill of Rights and all of the subsequent amendments, as well as The Declaration of Independence.

These are word-for-word facsimiles of significant documents… Every American should own a copy.
Delegates of The Constitutional Convention

“Don’t interfere with anything in the Constitution. That must be maintained . . . for it is the only safeguard of our liberties. And not to Democrats alone do I make this appeal, but to all who love these great and true principles.”
–Abraham Lincoln

"Whilst the last members were signing [the Constitution], Doctor Franklin, looking towards the President's chair, at the back of which a rising sun happened to be painted, observed to a few members near him, that painters had found it difficult to distinguish in their art, a rising, from a setting, sun. I have, said he, often and often, in the course of the Session, and the vicissitudes of my hopes and fears as to its issue, looked at that behind the President, without being able to tell whether it was rising or setting; but now at length, I have the happiness to know, that it is a rising, and not a setting sun.”
–Benjamin Franklin (1787)

“The free system of government we have established is so congenial with reason, with common sense, and with a universal feeling, that it must produce approbation and a desire of imitation, as avenues may be found for truth to the knowledge of nations.”
–James Madison (1826)

“If in the opinion of the People, the distribution or modification of the Constitutional powers be in any particular wrong, let it be corrected by an amendment in the way which the Constitution designates. But let there be no change by usurpation; for though this, in one instance, may be the instrument of good, it is the customary weapon by which free governments are destroyed.”
–George Washington (1796)

By Delegates of The Constitutional Convention
LIST PRICE $5.99
PRICE MAY VARY BY RETAILER

More books from this author: Delegates of The Constitutional Convention