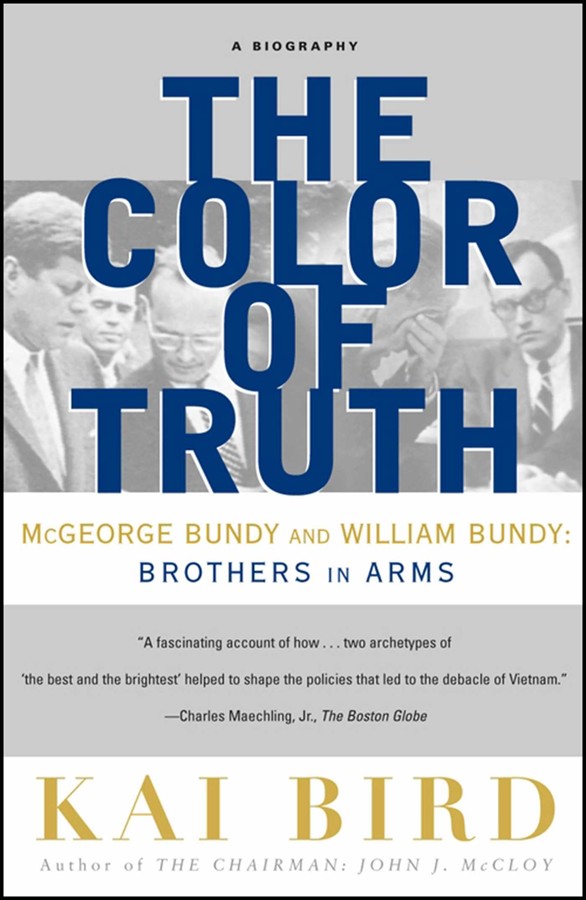 By Kai Bird
LIST PRICE $15.99
PRICE MAY VARY BY RETAILER

"Grey is the color of truth."
So observed Mac Bundy in defending America's intervention in Vietnam. Kai Bird brilliantly captures this ambiguity in his revelatory look at Bundy and his brother William, two of the most influential policymakers of the Kennedy and Johnson administrations. It is a portrait of fiercely patriotic, brilliant and brazenly self-confident men who directed a steady escalation of a war they did not believe could be won. Bird draws on seven years of research, nearly one hundred interviews, and scores of still-classified top secret documents in a masterful reevaluation of America's actions throughout the Cold War and Vietnam.

Kai Bird is the co-author with Martin J. Sherwin of the Pulitzer Prize-winning biography, American Prometheus: The Triumph and Tragedy of J. Robert Oppenheimer (2005), which also won the National Book Critics Circle Award for Biography. His other books include The Chairman: John J. McCloy, the Making of the American Establishment (1992) and The Color of Truth: McGeorge Bundy & William Bundy, Brothers in Arms (1998). Bird’s many honors include fellowships from the Guggenheim Foundation, the MacArthur Foundation, the German Marshall Fund, and the Rockefeller Foundation. A contributing editor of The Nation, he lives in Kathmandu, Nepal, with his wife and son.

Charles Maechling, Jr. The Boston Globe A fascinating account of how...two archetypes of "the best and the brightest" helped to shape the policies that led to the debacle of Vietnam.

Bruce Nussbaum Business Week Compelling....Along with Halberstam's The Best and the Brightest and The Wise Men by Walter Isaacson and Evan Thomas, Kai Bird's The Color of Truth forms a trilogy that shows that America, in times of difficulty, finds "wise" men to lead it. But they often lack the courage of their convictions to do so properly.

Ronald Steel The Washington Post A darkly dramatic story, told with sensitivity and political passion, of pride, power, privilege, hubris and idealism -- not only of the Bundys but of the nation they served.

Foreign Affairs The [Vietnam) chapters are first-rate....Bird powerfully shows how the brothers struggled to craft a "vital center" but built one that could not hold.

Charles Wright Biography Magazine Bird's dual biography offers a vivid, dramatic chronicle Of the genesis, the conduct, and the aftermath of the long, undeclared war in Southeast Asia.

By Kai Bird
LIST PRICE $15.99
PRICE MAY VARY BY RETAILER