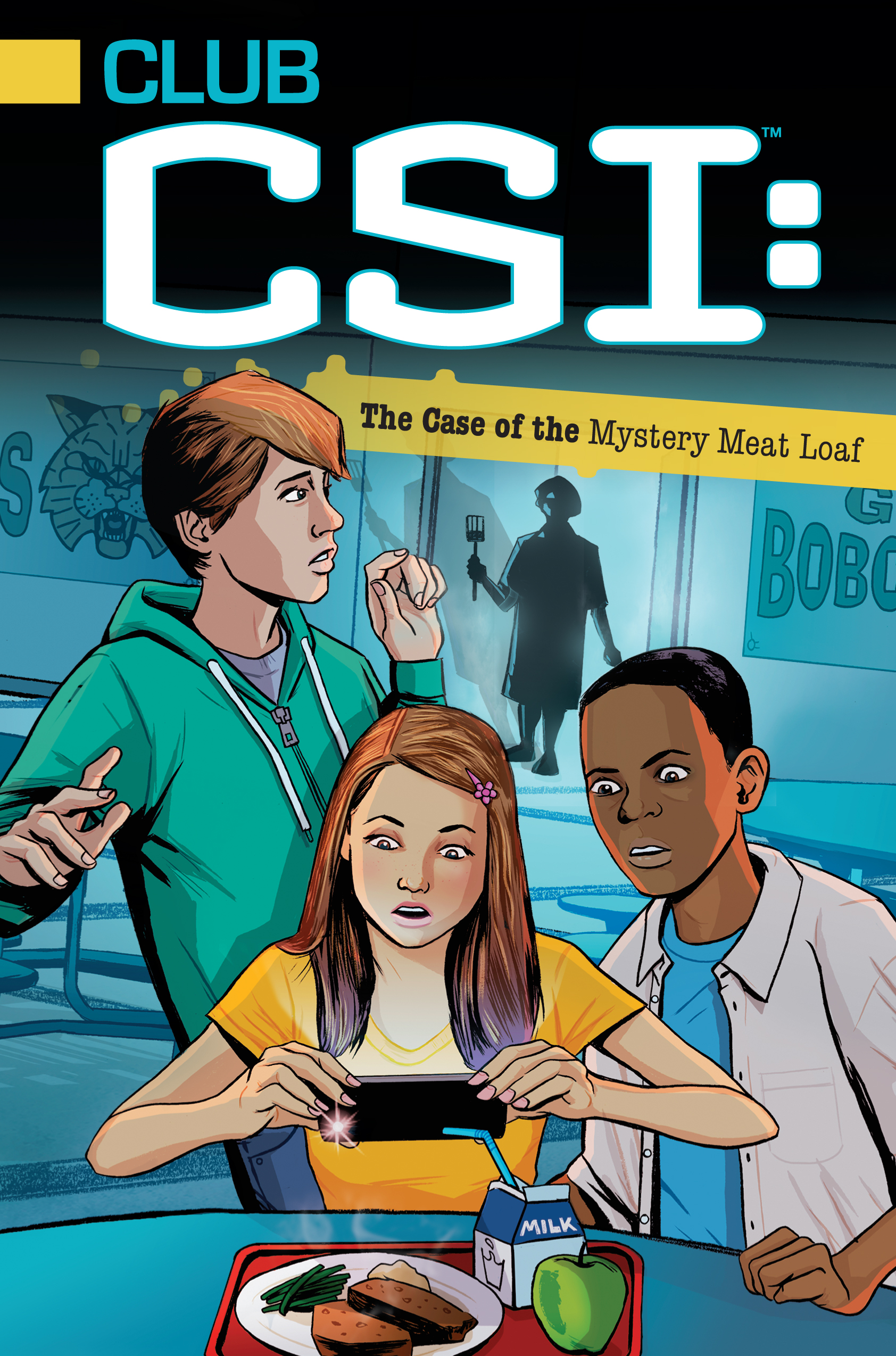 How do you dust for fingerprints on a meat loaf? Club CSI: is on the case in this middle grade series about forensic science!

Calling all kid crime-solvers: Forensic science isn’t just for grown-ups anymore! Thanks to the popularity of shows like CSI: Crime Scene Investigation, forensic science has made its way into the classroom. This middle grade series stars a group of students whose forensic science class inspires them to form a Club CSI to investigate crimes and capers at school. As Club CSI: collects clues, readers will love trying to put the pieces together to find out what really happened in this series that is part mystery, part detective story, and just plain fun!

In The Case of the Mystery Meat Loaf, Ben, Corey, and Hannah’s first case as Club CSI begins when a bunch of students and the principal get food poisoning from the cafeteria’s hot lunch. Everyone blames the new science teacher because she pushed the lunch lady to add her healthy “meatless meat loaf” recipe to the menu, but Club CSI: isn’t pointing fingers until they evaluate the evidence. Can they find out who messed with the meat loaf before the science teacher gets in trouble or more people get sick? Club CSI: is on the case!

Hannah, Ben, and Corey hurried down the long hallway of Woodlands Junior High. The three best friends didn’t want to be late for their first class with Mr. Longfellow, the earth science teacher.

“I hear he knows so much about rocks because he was there when they made ’em,” Corey said. All three laughed.

As they climbed the stairs to the second floor, Hannah asked, “So, what’d you do over break?”

Corey grinned. “Video games and basketball. Working on my dunk.”

Hannah looked skeptical. “You can dunk?”

Hannah shifted her backpack to her other shoulder. “Well, practicing for my ballet recital took a lot of time.”

“You were a mouse, right?” Corey asked, smiling.

Hannah rolled her eyes and then laughed. “I haven’t been a mouse in years! I was a snowflake. And that was in The Nutcracker, back in December. This was a regular recital with my ballet class.”

“Promotion—nice.” Corey turned to Ben. “And how did you spend your vacation?”

Ben blinked and looked a little embarrassed. “I thought since we were going to start a new class in earth science, it might be interesting to read a book about geology. . . .”

“And you find that surprising because . . . ?” Corey asked, laughing.

“What?” Ben protested. “It wasn’t an assigned book, so technically I wasn’t studying!”

The bell rang just as Hannah touched the door to the science lab. “And technically we’re on time,” she said.

She opened the door, and they slipped into the lab, which smelled like chemicals. After they found three seats together, they noticed a slim young woman standing at the front of the class. Her dark hair was pulled into a messy bun at the nape of her neck, with a pencil stuck through it. She wore a loose-fitting black dress with a cropped jean jacket—and cowboy boots. Hannah, who had never thought cowboy boots could look so good with a dress, thought she looked totally cool.

Corey whispered, “Mr. Longfellow looks nothing like I pictured him.”

As Hannah suppressed a giggle, the woman set a cardboard box on the desk and began to speak. “Good morning, class. My name is Miss Hodges. I know you were expecting Mr. Longfellow to teach earth science, but there’s been a change of plans.”

She turned to the dry-erase board and wrote her name. “Mr. Longfellow has retired. So you’re stuck with me.” She smiled.

Hannah, Ben, and Corey exchanged quick looks. From everything they’d heard about Mr. Longfellow, Miss Hodges was going to be a big improvement. She was young! She dressed cool! She smiled! The new semester was looking better already!

“And even though this is still a science class,” she continued, “the curriculum has been changed to match my specialty.” As she spoke, Miss Hodges wrote “Forensic Science” on the board in clear, bold letters and then underlined it. “Who can tell me what this means?”

Ben raised his hand, and Miss Hodges nodded toward him. “‘Forensic’ has to do with legal arguing or debating. So ‘forensic science’ is coming up with evidence to support your argument, usually in court.”

Miss Hodges nodded, impressed. “Very good! This semester we’re going to learn about the science of gathering and evaluating evidence.”

Some of the students looked intrigued. Others looked a little thrown. They’d been expecting a class in earth science, but now it sounded as though they were going to learn how to become detectives or something. This obviously wasn’t going to be your average science class.

Miss Hodges continued, “My cousin works in a crime lab in Las Vegas, so we may even get the opportunity to—”

Just then the door to the room burst open. A figure dashed in, snatched the box off Miss Hodges’s desk, yelled something, and ran back out of the lab. A couple of students quickly stood up, and a few frantically dug out their phones.

Puzzled, the students sat down, pulled paper out of their backpacks, and started writing. Miss Hodges walked around the room, quietly observing what the students were writing. She nodded and raised her eyebrows as she observed. After a few minutes she asked them to stop by saying, “Okay, pencils down!”

“Now,” she said, sitting on the edge of her desk instead of behind it. “Be honest. How many of you wrote that the person who ran in here was wearing a hat?”

Only about eight students raised their hands. “What color was the hat?” Miss Hodges asked. Corey raised his hand. “Yes?”

“Dude, his hat was brown,” Ricky Collins argued from the back of the room. Ricky was a big tough kid whose mom ran the school cafeteria.

“I’m pretty sure it was blue,” a shy girl named Katie said quietly. “Also, it wasn’t a guy. It was a girl.”

The students started to argue about what they’d seen. Miss Hodges listened for a few moments and then raised her hands for quiet. “So what did the person yell?” she asked, bringing the room back to order.

They all had different opinions about that, too. Some thought the intruder had yelled, “This is mine!” Others were sure he (or she) had shouted, “Free your mind!” One girl even thought the thief had said, “Kisses are fine!” but she was in a minority of one.

Miss Hodges laughed. “Let’s find out, shall we?” She opened the door to the lab and leaned into the hall. “Come on back in,” she called.

A short girl dressed in black came into the class. She was carrying the box and wearing a brown knit hat. “See? Brown hat!” Ricky said, gloating.

“True, but she’s a girl,” Hannah pointed out.

“Yeah, I noticed,” said Ricky. A couple of boys laughed.

“Thank you, Stephanie,” Miss Hodges said to the girl. “Good job.” The girl smiled, set down the box, and started to leave. “Oh, by the way,” Miss Hodges added. “What did you yell when you came in here?”

Stephanie giggled. “It was gibberish—‘Gisha nine.’ Just like you told me to say.” Giving a little good-bye wave to the class, she left.

Miss Hodges turned back to the class. “What did we learn here?”

Hannah raised her hand. “You can’t always trust what you see. Or hear.”

“Exactly! Even eyewitnesses aren’t always reliable. And with many crimes, there are no witnesses,” Miss Hodges explained. “That’s why we need to collect hard evidence: fingerprints, hairs, fibers, footprints, tire marks . . .”

“Bl-o-o-d-sta-i-i-i-ns?” Ricky asked, drawing the words out to make it sound as gross as possible. One of his buddies snorted.

The class listened, riveted to what Miss Hodges was saying.

Ricky made a loud retching noise, trying to draw attention back to him.

Miss Hodges gave Ricky a quick look and then went on, “In this class you’ll learn about how to carefully and systematically gather evidence, scientifically analyze it—sometimes using microscopes and chemicals—and present the results to help solve crimes.”

Corey raised his hand, and Miss Hodges called on him. “Before the, uh, incident,” he said, “did you say something about having a cousin who works in a Vegas crime lab?”

Miss Hodges nodded. “Yes, I did. Good memory for details. You would make a fine investigator.” Corey sat up straight, beaming with pride.

“What did you want to know about my cousin? Or his lab?” Miss Hodges asked.

“Class trip to Vegas!” Ricky yelled out. “Vegas rocks!” He liked to let the other kids know he’d traveled beyond the limits of the small Nevada town in which they lived.

“We might be able to go visit, but please raise your hand next time you have something to say,” Miss Hodges said, leveling her gaze on Ricky for a moment before continuing. “It’s also possible I might persuade him to come here and address the class about his work sometime.”

The students murmured excitedly. Las Vegas! Miss Hodges cocked her head and raised an eyebrow. “But don’t get the wrong idea,” she said. “This class isn’t going to be all field trips and guest speakers. We’re going to learn the science of crime investigation. And there will be tests.”

A couple of students groaned. Ricky rolled his eyes. “Now,” said Miss Hodges, turning back to the board, “let’s begin with a brief history of forensic investigation. . . .”

After class Hannah, Ben, and Corey walked down the hall, buzzing with excitement about their new teacher and the field of forensics.

Ben laughed. “Well, that, too. But I meant the class. I think it’s going to be really interesting.”

“It’s going to be really interesting,” Ricky mocked, coming up behind them. “That’s just what you would say, dork.”

Ben looked annoyed, but held his temper. “Don’t you think forensic science is going to be better than earth science, Ricky?”

“No, I don’t,” Ricky said with a snarl, looking disgusted.

“Why not?” Hannah asked.

Ricky looked around, as though he were checking to see if any teachers were listening. “Because I was gonna cruise through earth science!”

“Cruise?” Corey asked. “But the only thing you know about rocks is how to throw them.”

Ricky ignored Corey’s comment. “Longfellow used the same tests for thirty years,” he said. “I’ve got copies of everything!”

“Isn’t that cheating?” Hannah asked. “And where’d you get them, anyway?”

Ricky sniffed. “I’ve got my sources.” Then he frowned. “But now those copies are totally worthless.”

“Too bad,” Hannah said. “I guess you’ll just have to study.”

“Or do something about it,” Ricky muttered. He ran ahead to the cafeteria.

They hustled down the hall toward the smell of burgers and fries.
David Lewman

David Lewman has written more than sixty-five books starring SpongeBob SquarePants, Jimmy Neutron, the Fairly OddParents, G.I. Joe, the Wild Thornberrys, and other popular characters. He has also written scripts for many acclaimed television shows. David lives in Los Angeles with his wife, Donna, and their dog, Pirkle.