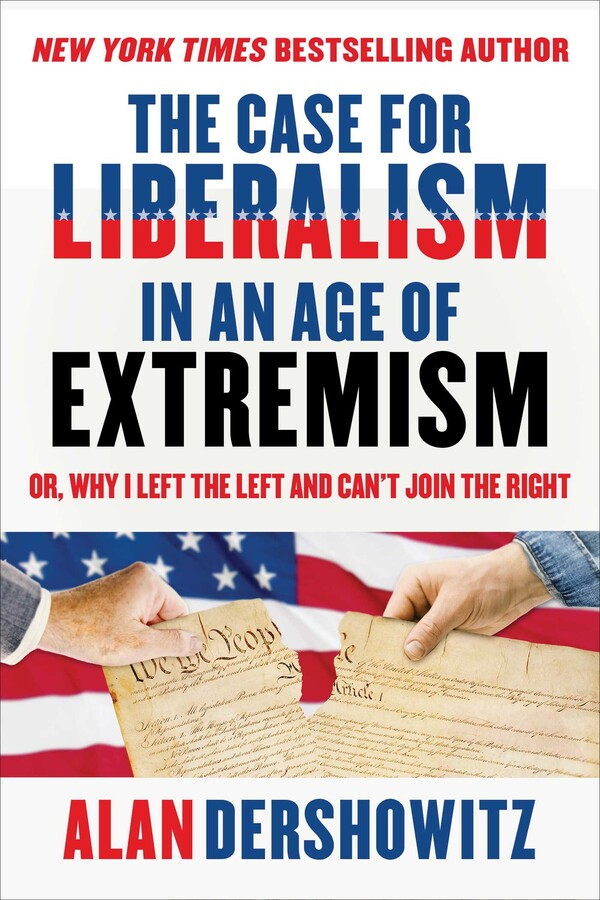 By Alan Dershowitz
LIST PRICE $16.99
PRICE MAY VARY BY RETAILER

In The Case for Liberalism in an Age of Extremism, Alan Dershowitz—New York Times bestselling author and one of America’s most respected legal scholars—makes a classical liberal argument for centrist government in the US, as the Founding Fathers and the Constitution intended.

Alan Dershowitz has been called “one of the most prominent and consistent defenders of civil liberties in America” by Politico and “the nation’s most peripatetic civil liberties lawyer and one of its most distinguished defenders of individual rights” by Newsweek. Yet he has come under intense criticism for his consistent classical liberalism in the face of a rapidly polarizing political landscape and for his steadfast support of centrist governance over either “progressive” or reactionary radicalism.

The Case for Liberalism in an Age of Extremism is a defense of liberalism and its renewed relevance today. It makes the case for classic liberal values and programs over radical-left and reactionary right-wing agendas, and for centrism over extremism in general, showing why the United States has thrived throughout history because of its enduringly centrist base. It seeks to restore contemporary liberalism to its important place in the American political landscape, and attempts to persuade centrists from both the left and right—who may today call themselves progressives or moderate conservatives—that they, too, belong in the big tent of centrist liberalism.

As a professor for half a century, Dershowitz never told students what values to accept or which candidates to support, but helped guide them to conclusions based on their own sets of values. He does the same in this book. A guide for all readers, rather than a piece of political advocacy for one party or another, The Case for Liberalism in an Age of Extremism is Alan Dershowitz’s argument for classical liberal values and their role in forming just societies and protecting against the dangers of extremism, just as they must today. It is essential reading for anyone interested in or concerned about political polarization on both the far-right and -left, and for everyone seeking a middle path between the extremes.

PRAISE FOR THE CASE FOR LIBERALISM IN AN AGE OF EXTREMISM

“Alan Dershowitz’s new book succeeds in connecting the most fundamental questions in the theory of liberalism with the practical challenges we face day to day as we deal with Covid-19 and its effects on all areas of our life. In doing so it gives the reader food for thought—and action.” —NATAN SHARANSKY, ISRAELI POLITICIAN, HUMAN RIGHTS ACTIVIST AND AUTHOR; US PRESIDENTIAL MEDAL OF FREEDOM RECIPIENT

“Alan Dershowitz powerfully advocates the fundamental precept that civil liberties and constitutional rights must be protected for all individuals and groups, even those whose beliefs we reject and condemn, lest we endanger freedoms for everyone. He persuasively champions liberalism as promoting this core but embattled tenet.” — NADINE STROSSEN, FORMER PRESIDENT OF THE NATIONAL ACLU; PROFESSOR AT NEW YORK LAW SCHOOL

“Alan Dershowitz is an unapologetic liberal. In The Case for Liberalism in an Age of Extremism, Dershowitz charts out the characteristics of classical liberalism, explains the danger in embracing intolerant and divisive isms attached to any label, and situates his decades of justice work in that tradition. Smart, incisive, and a must-read.” —RONALD S. SULLIVAN JR., JESSE CLIMENKO CLINICAL PROFESSOR OF LAW, HARVARD LAW SCHOOL

“In an increasingly partisan and polarized universe—where ‘things fall apart; the centre cannot hold’—Dershowitz has written an inspirational and timely book on the importance of liberalism as a centrist credo for our troubled times.” —IRWIN COTLER, FORMER ATTORNEY GENERAL AND MINISTER OF JUSTICE, CANADA

“Alan Dershowitz is a living profile in courage.” —STEVE FORBES

“The truth has no greater defender than Alan Dershowitz.”—BENJAMIN NETANYAHU

“There are great legal minds; there are those who can also communicate well on television; then there is Dershowitz. The professor is uniquely capable of arguing a position, while putting a premium on legal and ethical legitimacy, not its popularity. Bravo, Dershowitz!”—CHRIS CUOMO, ANCHOR AND REPORTER, CNN

“Anyone interested in the true merits of criminal law and very fine writing must read Alan Dershowitz’s book.”—TRUMAN CAPOTE

“Love him or hate him, Dershowitz has lived a life that matters, hugely and enduringly. He is a man in full at a time when most of us aspire to be little more than a presence on Twitter.”—NEW YORK TIMES BOOK REVIEW

“Courage and principle are rare today. Professor Dershowitz has them both.”—SENATOR TED CRUZ

By Alan Dershowitz
LIST PRICE $16.99
PRICE MAY VARY BY RETAILER