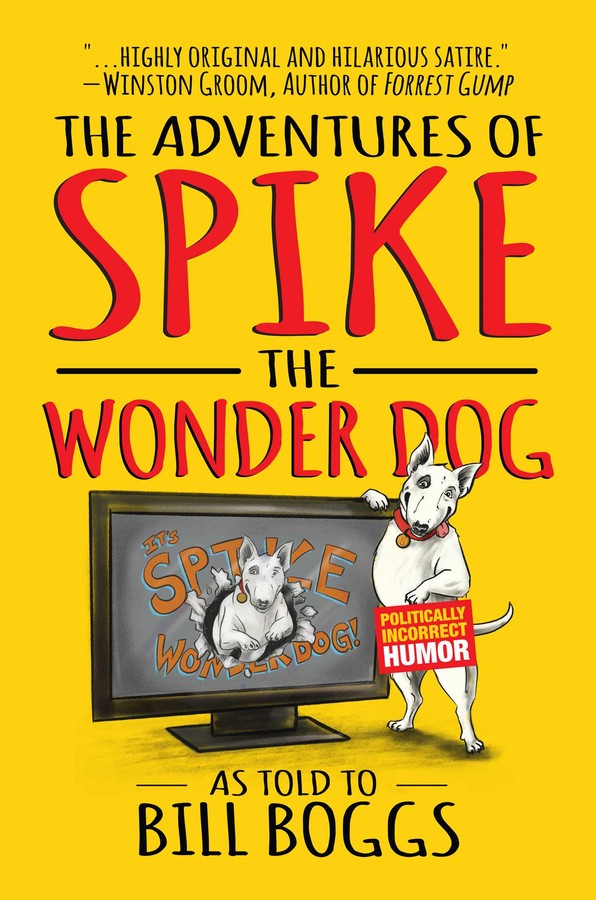 The Adventures of Spike the Wonder Dog

As told to Bill Boggs

By Bill Boggs
LIST PRICE $25.00
PRICE MAY VARY BY RETAILER

A very funny English Bull Terrier with a politically incorrect sense of humor and a heart of gold tells the story of his rise to fame on both his master’s TV talk show and social media, and the price he pays for that fame.

Spike is an English Bull Terrier with a keen comedic eye for human foibles. He rockets to TV and internet fame after appearing on The Tonight Show with Jimmy Fallon, along with his master Bud, who hosts a local morning show in High Point, North Carolina. Spike and Bud soon hit the fast track to bigger stardom when Bud signs on for a talk show in New York City.

Spike’s pop culture fame and the A-list crowd he mingles with in Manhattan exact a potentially fatal price. Dangerous forces enact a scheme to snatch the famous Wonder Dog that plunges him into a desperate fight for his life.

The brash, athletic, sardonic, honest, and hilarious Spike will capture the hearts of readers who enjoy a character who tells it like it is. They will fall in step with his eye-rolling observations and root for this underdog of a wonder dog. A category unto itself, Spike is not a cartoon version of dogs acting human, but rather a charming portrayal of the human-like, spunky, and passionate mind of a dog—and the love he and his master share for each other.

Spike calls to mind the cultural icon Rocky Balboa as he goes into battle armed with humor and guile as well as the ancient, but never tested, skills of his breed. Will they be enough to enable him to survive?

"Bill Boggs and his friend Spike the Wonder Dog unleash comedic wizardry in this madcap, highly entertaining, satirical novel. Spike is the newest canine literary hero to take on the world with hilarious results."

"The Adventures of Spike the Wonder Dog is so smart, witty, and inventive that I had to keep reminding myself that I didn't write it."

"Don't let the title of the book fool you—The Adventures of Spike the Wonder Dog is indeed about a dog, and a wondrous canine at that! But the book is also a highly personal and very compelling memoir of the underbelly of local and national television and fame. Amidst the hilarity, and it is indeed one of the funniest books I've ever read, there is a very touching coming-of-age story for man and dog, with good-natured, lovable characters albeit with some dastardly ones as well."

– Will Friedwald, Wall Street Journal, author of "Straighten Up and Fly Right: The Life and Music of Nat King Cole"

"Bill Boggs has hit a home run with this highly original and hilarious satire on...everything! A terrific read I highly recommend."

"Mr. Lee, call your lawyer. There's a new Spike in town, an acid-tripping terrier who savages the media landscape while avoiding death and castration. Bill Boggs takes us on a darkly comic journey through his twisted world. It takes a hero with four legs—and two balls—to survive."

"OMG! Who could write such an outrageous novel? Spike the Wonder Dog! With a little help from his pal, the raconteur Bill Boggs, Spike has gotten his memoirs down (on a better grade of paper than most pets get). His dog-eared hearing picks up the bizarre sounds of people being their fallible human selves, and his soft canine eyes see more than is probably good for him. Spike the Wonder Dog is an irreverent hoot."

“The wondrous Bill Boggs’ The Adventures of Spike the Wonder Dog has another big adventure awaiting: climbing to the heights of the bestseller lists. Spike tells us the story of how he and his master, Bud, go from Spike’s first appearance on local High Point North Carolina daytime TV, to a big deal appearance on late night TV, to big time NY TV. Spike will keep you laughing—and on the edge of your seat at the same time. Filled with real-life celebs, lots of inside TV info and crazy adventures, this one is made for the big screen. How do you say ‘bravo’ in dog?

"Like Joan Rivers, The Adventures of Spike the Wonder Dog is definitely Not Safe for Snowflakes. But fans of transgressive humor like Family Guy or Dave Chappelle will appreciate Spike's wild tales, which are raunchy, hilarious, and spectacularly politically incorrect. Bill Boggs has the manners of a gentleman, as does Spike—so they'll both understand if you take offense. Rivers would just have told you to go fuck yourself."

"A quick escape from life's stresses with this funny and witty read. Bill Boggs has written a satire populated with a cast of characters worthy of a hit comedy."

– Talia Carner, author of "The Third Daughter," "Hotel Moscow," Jerusalem Maiden," and others

"Bill Boggs draws upon years of experience as a TV host for this satirical look inside the wacky world of TV talk shows. The non-stop comedic banter from dog Spike (who could have a stand-up comedic career if he was human) makes the story flow like you're watching a great sitcom."

"Exactly the kind of funny book we all need to be reading now. It’s a darkly absurdist sendup of the television industry, itself a nonsensical environment, written by someone who knows the ins and outs of the business like no other."

"This is laugh-out-loud-funny smart satire."

"Such a brilliant book. Funniest book I have read in a long time, made me laugh out loud. Spike is a tremendous character, I couldn't put it down."

"I laughed and marveled. There is some Hemingway in it, and nutso, laugh-out-loud humor. A wonderful uplifting romp."

"It's a brilliant sendup of the kind of show Boggs used to host. Although it's fiction, Boggs smartly drops in numerous real-life boldfaced names to help further engage the reader."

"This canine is irreverent, politically incorrect, savvy and hilarious, especially when relating his take on behind-the-scenes media life."

"Bill Boggs wrote a book that's really worth reading about a dog and his talk show host master who become big TV stars. It's out, get it."

"A page-turning satire on today's media world and culture, that's also loosely patterned on Boggs' own career arc in television."

The Adventures of Spike the Wonder Dog

As told to Bill Boggs

By Bill Boggs
LIST PRICE $25.00
PRICE MAY VARY BY RETAILER