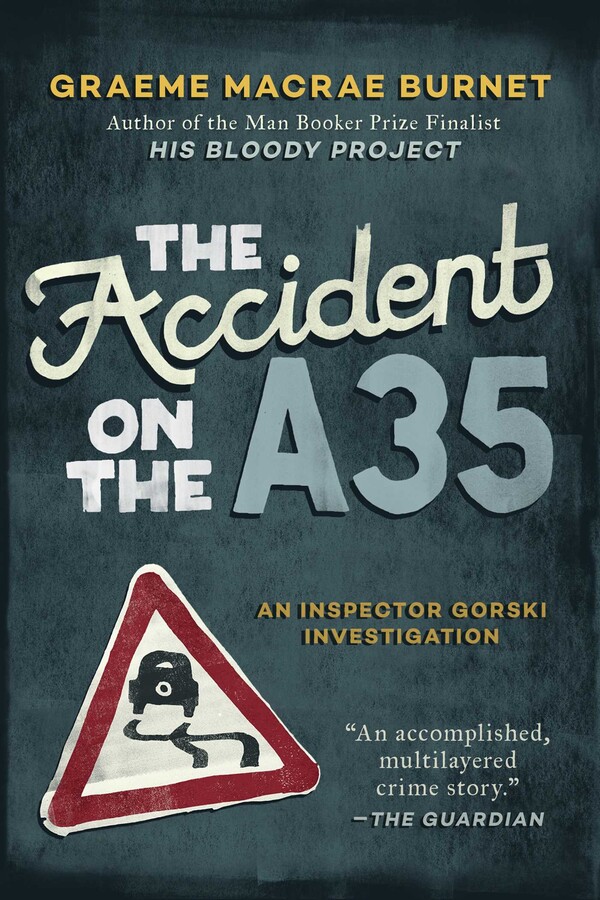 The Accident on the A35 returns to the scene of Burnet’s accomplished first novel, The Disappearance of Adèle Bedeau--the small French town of Saint-Louis. Detective Gorski is called away from his night of solitary drinking to the site of a car accident that left Bertrand Barthelme, a respected solicitor, dead. When the deceased's rather attractive wife suggests that the crash may not have been an accident, Gorski looks closer into Barthelme's circumspect movements on the night of his death. His investigation leads him to various bars, hotels, and brothels in the nearby city of Strasbourg. At the same time, Barthelme's rebellious son, drunk on Jean Paul Sartre novels, is conducting an investigation of his own. Their independent, dual inquiries lead the reader down a twisted road marked by seedy back rooms, bar brawls, a moment of accidental incest, and--as we have come to expect from Burnet--copious amounts of wine.

The Accident on the A35 is a darkly humorous, subtle, and sophisticated novel that burrows into the psyches of its characters and explores the dark corners of life in a sleepy town.

Graeme Macrae Burnet has established a reputation for smart and literary mystery writing with his highly praised novel, His Bloody Project, which was a finalist for the Man Booker Prize and the Los Angeles Times Book Award. He was born and brought up in Kilmarnock and has lived in Prague, Bordeaux, Porto, and London. He now lives in Glasgow, Scotland.

“Reminiscent of Inspector Maigret novels by Georges Simenon, Mr. Burnet's Gorski chronicles—this is his second—are memorable works of art in their own right.” —Wall Street Journal, Best Mysteries Pick of 2018

“The Man Booker Prize finalist spins another tale within a tale . . . of domestic intrigue in backwater France with two appealing detective figures.”—Kirkus

“A masterful psychological thriller.”—Ian Stephen, author of A Book of Death and Fish

“Psychologically astute and convincingly grounded in its environment, this study of petty persecution and murder is a fine achievement from an ambitious and accomplished writer.”—The National

“Masterful, clever and playful . . . one of the most experimental and assured authors currently writing in Scotland.”—Louise Hutcheson, A Novel Bookblog

“One of the most enjoyable and involving novels you'll read this year.”—Alistair Braidwood, Scots Wha Hae

"An accomplished, multilayered crime story set in France from the Booker-shortlisted Scottish author.. . . It has a denouement like something out of Greek tragedy but delivers as a proper police procedural."—The Guardian

"Far more than most crime books, this is very much a novel of character—particularly that of the wistful but tenacious Gorski . . . with its nostalgic echoes of crime fiction of the past and elegant, economical prose, it affords a variety of quiet and satisfying pleasures."—Financial Times

"It’s slow, atmospheric, often surprising, with a denouement which is beautifully under-played. One should also say it is daring . . . enjoyable, a very nice piece of craftsmanship."—Scotsman

"Clever, meandering and oh, so French.. . .Burnet really has - a rare thing nowadays - a novelist's eye.. . . I confess myself seduced by the atmosphere of provincial ennui. I longed to shrug gallically at a detective through a haze of cigarette smoke, to pour myself a drink from a cut-glass decanter, to drive to the next town to make acrobatic love to a beautiful...I'm getting carried away." —James Marriott, London Times

"Highly accomplished, The Accident on the A35 works on several levels... The narration has the simple momentum of classic crime writing.. . .Burnet's cleverness doesn't get in the way of your enjoyment but playfully adds levels of meaning." —Anthony Cummins, Observer.

"[A] truly superlative tale... fascinating...one of the most clever and compelling novels to be published this year." —Lesley McDowell, Herald.

"As steeped in the works of Simenon as a good boeuf bourgignon is in red wine. The characters' pretensions are mercilessly exposed in frill-free prose... What matters, of course, is whether a novel's characters seem to the reader to be alive. Burnet's do." —Jake Kerridge, Telegraph.

"There are so many echoes of French writers in this book.. . . [Raymond] is a fantastic depiction of the typical alienated teenager." —Alex Clark, BBC Radio 4 Open Book.

"Simenon fans will feel at home in the claustrophobic and petty-minded atmosphere of the French provinces."—Times and Sunday Times Crime Club 'Picks of the Month'.

"It's only a story --or is it-- Graeme Macrae Burnet makes such masterly use of the narrative form that the horrifying tale he tells in HIS BLOODY PROJECT, a finalist for this year's Man Booker Prize, seems plucked straight out of Scotland's sanguinary historical archives." - Marilyn Stasio, The New York Times Book Review

"[A] powerful, absorbing novel" Fiction authors from Henry James to Vladimir Nabokov to Gillian Flynn have used [an unreliable narrator] to induce ambiguity, heighten suspense and fold an alternative story between the lines of a printed text. Mr. Burnet, a Glasgow author, does all of that and more in this page-turning period account of pathos and violence in 19th-century Scotland" [A] cleverly constructed tale. Has the lineaments of the crime thriller but some of the sociology of a Thomas Hardy novel." -Tom Nolan, Wall Street Journal

"Burnet is a writer of great skill and authority . . . few readers will be able to put down His Bloody Project as it speeds towards a surprising (and ultimately puzzling) conclusion." -Financial Times

"A stellar crime novel and a wrenching historical portrait, HIS BLOODY PROJECT also succeeds at lyrically questioning whether it's possible to know another man's mind--or even desirable. The novel sends out vines in all directions, its characters' tangled motives obscured by tragedy and lies." - Lyndsay Faye, author of Gods of Gotham

"Psychologically astute and convincingly grounded in its environment . . . a fine achievement." -The National

"Fiendishly readable . . . A psychological thriller masquerading as a slice of true crime. . . The book is also a blackly funny investigation into madness and motivation." -Guardian

"I disappeared inside the pages of Graeme Macrae Burnet's His Bloody Project. . . fascinating" -Seattle Times

"Burnet has created an eloquent character who will stick with you long after the book is read." -Seattle Review of Books

"Both a horrific tale of violence and a rumination on the societal problems for poor sharecroppers of the era." - Time

"One of the most convincing and engrossing novels of the year." -The Scotsman

"There is no gainstaying the ingenuity with which Burnet has constructed his puzzle. . ." -Telegraph

"A masterful psychological thriller" - Ian Stephen, author of A Book of Death and Fish

"A gripping crime story, a deeply imagined historical novel, and gloriously written, all in one tour-de-force of a book. Stevensonian, that's the highest praise I can give." - Chris Dolan, Sunday Herald, Books of the Year

"Psychologically astute and convincingly grounded in its environment, this study of petty persecution and murder is a fine achievement from an ambitious and accomplished writer." - Richard Strachan, The National

"Masterful, clever and playful . . . one of the most experimental and assured authors currently writing in Scotland" - Louise Hutcheson, A Novel Bookblog

"One of the most enjoyable and involving novels you'll read this year" - Alistair Braidwood, Scots Wha Hae