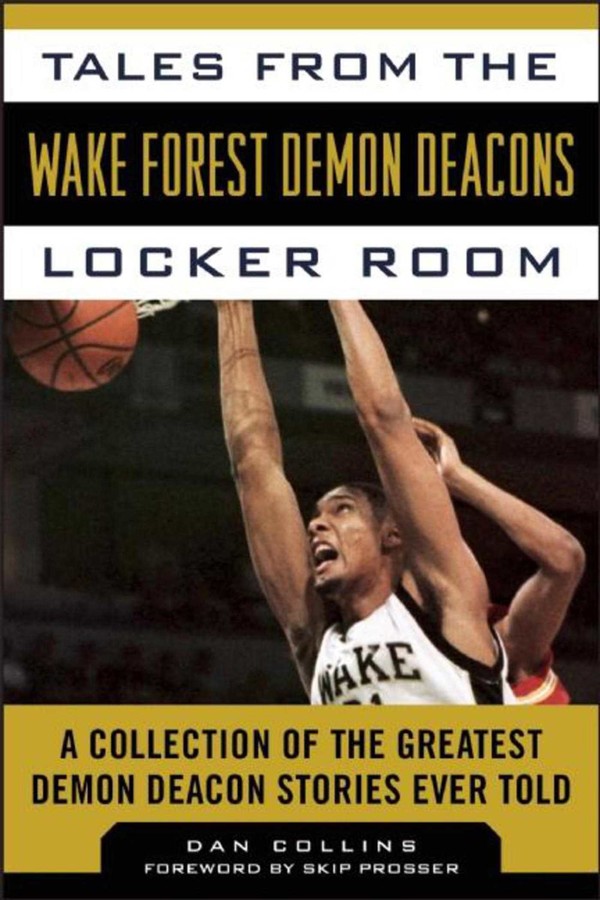 Part of Tales from the Team
By Dan Collins
Foreword by Skip Prosser
Published by Sports Publishing
Distributed by Simon & Schuster
LIST PRICE $12.99
PRICE MAY VARY BY RETAILER

Based on the gold-standard currency of tradition and success, few college basketball programs are richer in history than Wake Forest University’s. This reissue of Tales from the Wake Forest Demon Deacons Locker Room, first published in 2004, traces that vibrant history from the birth of the league to the growing successes of the team today. An original member of the Atlantic Coast Conference, the Demon Deacons have provided the acclaimed league with much of its color and characternot to mention many of its colorful characters.

Author Dan Collins provides stories about legendary players like Muggsy Bogues, the 5’3” guard who defied the description of basketball as a big man’s game, and the glory days of Tim Duncan, the onetime aspiring Olympic swimmer who grew up to become a five-time NBA champion and one of the greatest players in the game. The book looks at great coaches like Richard Crozier, the director of the university gymnasium who introduced basketball to Wake Forest; coach Murray Greason, whose love for the game of basketball was second only to his love for his beagle hounds; and coach Bones McKinney, the hyperactive Baptist minister whose dual, and at times dueling, religions were based on the Bible and basketball. Tales from the Wake Forest Demon Deacons Locker Room chronicles how Wake Forest basketball survived the university’s relocation from the quaint town of Wake Forest to the city of Winston-Salem, and how the university has thrived with the support of its devoted fans.

Part of Tales from the Team
By Dan Collins
Foreword by Skip Prosser
Published by Sports Publishing
Distributed by Simon & Schuster
LIST PRICE $12.99
PRICE MAY VARY BY RETAILER