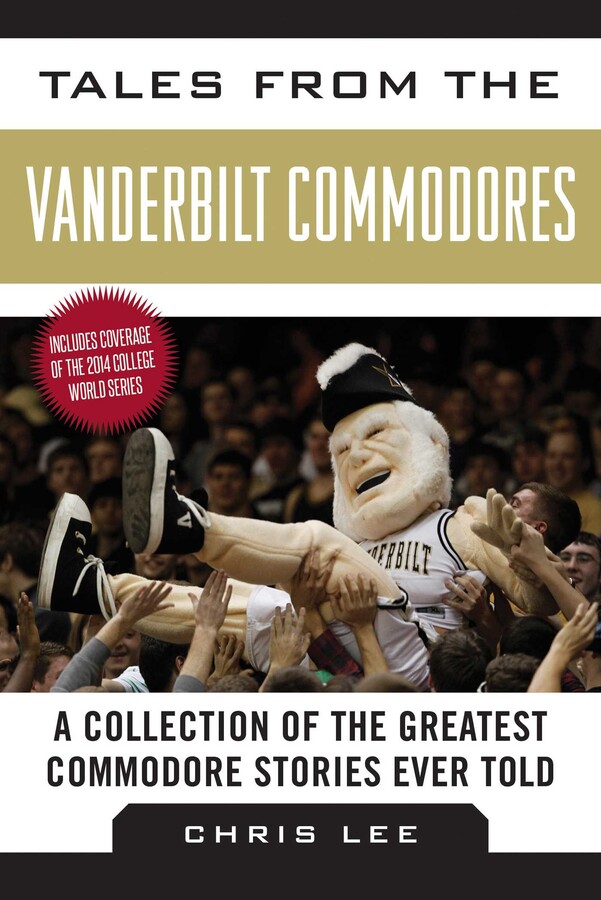 Part of Tales from the Team
By Chris Lee
Published by Sports Publishing
Distributed by Simon & Schuster
LIST PRICE $19.95
PRICE MAY VARY BY RETAILER

Though boasting a smaller student body than most other Southeastern Conference schools, Vanderbilt University’s spirit and passion is without boundsand with good reason. This book highlights several Vandy sports programs whose teams have shined over the course of the school’s athletic history and the players and coaches who have been a part of them.

Most recently, the baseball team accomplished what no other VU men's team had done before in capturing the school's first-ever national championship. Author Chris Lee details the 2014 College World Series run as well as the years leading up to the feat, with stars like 2012 American League Cy Young Award winner David Price and Pedro Álvarez, also an alumnus and a member of the 2013 National League All-Star team.

Vandy has had recent success on the football field as well. Under coach James Franklin, the Commodores had their first sold-out season opener since 1999. In 2012, the squad tied the school record for most wins and finished in the top 25 poll, en route to a bowl game for the second straight year, and followed that with another bowl victory and a Top-25 finish in 2013.

The men’s basketball team has also offered a lot of excitement of late. In 20112012, the squad boasted the top two scorers in the conference in John Jenkins and Jeffrey Taylor, both of whom were drafted to the NBA. The team won the SEC Tournament title that season, beating conference rival Kentucky. On the women’s side, the team made it to the second round of the NCAA Tournament in 2013, marking the 11th time in as many seasons that coach Melanie Balcomb has led the team to at least 20 wins and an NCAA berth.

In this latest addition to the Tales From series, Chris Lee highlights these athletes and coaches and so many others who have become part of Commodore lore. It’s perfect for the fan of the black and gold!

Part of Tales from the Team
By Chris Lee
Published by Sports Publishing
Distributed by Simon & Schuster
LIST PRICE $19.95
PRICE MAY VARY BY RETAILER