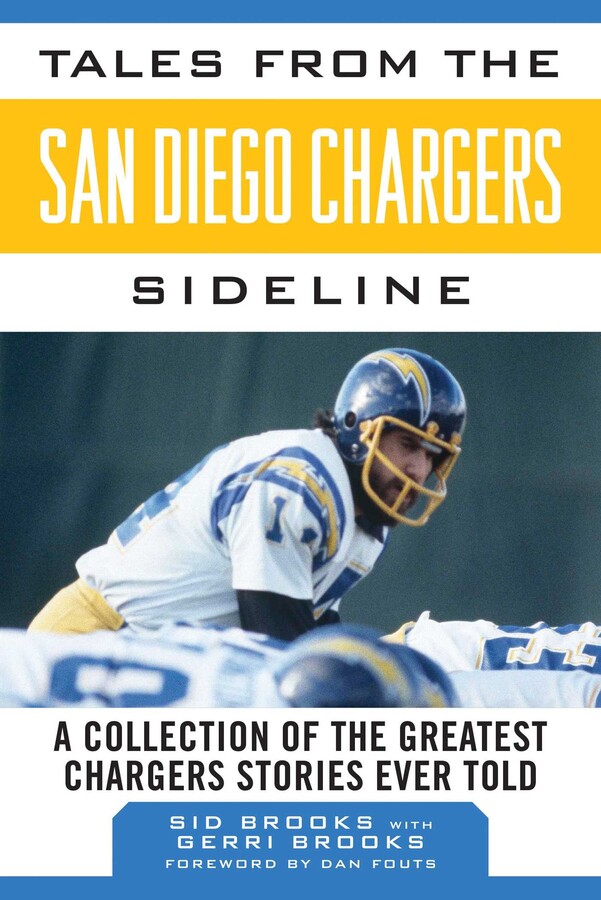 A Collection of the Greatest Chargers Stories Ever Told

Part of Tales from the Team
By Sid Brooks and Gerri Brooks
Foreword by Dan Fouts
Published by Sports Publishing
Distributed by Simon & Schuster
LIST PRICE $19.95
PRICE MAY VARY BY RETAILER

During his 27-year tenure with the San Diego Chargers, equipment manager Sid Brooks kept more than 5,000 football players from appearing naked before their cheering fans. The first African American to hold the job of equipment manager in the NFL, Brooks was tasked with seeing that each player left the locker room in uniform. But the means to that end was far more complicatedand outrageousthan one would believe.

This reissue of Tales from the San Diego Chargers Locker Room takes the reader aboard the elevator to B2, the basement of Qualcomm Stadium, where the Chargers locker room is housed. In that basement, the equipment department and trainers, affectionately known as "dungeon rats," ran the Chargers locker room. There, Sid Brooks became caretaker for all who crossed its threshold.

In this book, Sid recounts stories unique to a life spent working behind the scenes in the Chargers locker room. He features stories about Chargers greats like Dan Fouts, Charlie Joiner, Kellen Winslow, Louie Kelcher, John Jefferson, Rodney Harrison, and Junior Seau. With an eye for detail, he recounts tales of spies sent out to capture the opposing team’s playbooks; the night the lights went out on Don Shula; wild cab rides with Fouts, Joiner, and Winslow; the zany pre-game rituals and idiosyncrasies of Russ Washington, Wilbur Young, Pat Curran, Woodrow Lowe, and others; rivalries born not on the playing field, but at the dominoes table; and plenty of pranks and good-natured ribbing.

Rarely does a book offer more than a passing glance at what makes a football team a family. But Sid Brooks not only introduces the family herehe also invites the reader over for dinner.

Sid Brooks was a retired Air Force senior master sergeant who served his last duties in the military in Vietnam and the Air Force Academy, was the equipment manager of the San Diego Chargers from 1973 to 2000. Known throughout the league as “ Doc,” he sat at the draft table for the Chargers during the NFL draft from 1990 to 2000. He passed away in 2007.

Gerri Brooks is the widow of Sid Brooks. She is the author of Love Potion (2006). She lives in San Diego, California.

A Collection of the Greatest Chargers Stories Ever Told

Part of Tales from the Team
By Sid Brooks and Gerri Brooks
Foreword by Dan Fouts
Published by Sports Publishing
Distributed by Simon & Schuster
LIST PRICE $19.95
PRICE MAY VARY BY RETAILER