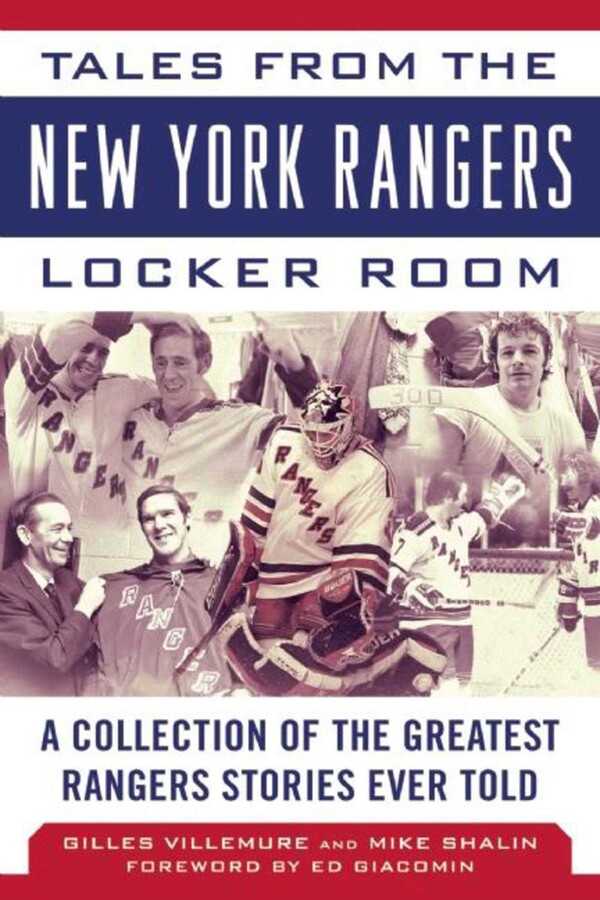 Part of Tales from the Team
By Gilles Villemure and Mike Shalin
Foreword by Ed Giacomin
Published by Sports Publishing
Distributed by Simon & Schuster
LIST PRICE $19.99
PRICE MAY VARY BY RETAILER

In the late 1960s the New York Rangers transformed from NHL also-rans to Stanley Cup contenders. Gilles Villemure was part of that transformation. The little goaltender had a long wait to make it to the National Hockey League, which had only six teams until after the middle of the decade. Eventually Villemure joined Eddie Giacomin to give the Rangers a strong 1-2 goaltending tandem. The Vezina Trophywinning twosome was a fixture for the Rangers, threatening to end the franchise’s long Stanley Cup drought, only to come up short. Now, forty years later, Villemure writes about his days with the Rangers in the newly updated Tales from the Rangers Locker Room. Villemure tells stories about old pals like Rod Gilbert, Vic Hadfield, Brad Park, Jean Ratelleand his boss, Emile The Cat” Francis.

The Rangers finally won that Stanley Cup in 1994, ending over fifty years of frustration, but it was those Francis-led teamsthe ones with Villemure and Giacomin in the goalthat brought New York’s Blueshirts, Madison Square Garden’s finest, to the top of the NHL. It is their influence that has continued to propel the Rangers forward even today, with a conference championship win in 2014 and the President’s Trophy in 2015. Fans young and old will want to hear Villemure’s stories come to life.

Mike Shalin is a veteran of over four decades in sports journalism, working for the Boston Herald and the New York Post. He spent much of his early career covering hockey before moving on to baseball and college sports. He is now a freelancer in the Boston area and has spent the last fifteen years as an official scorer at Fenway Park. Shalin is the author of Donnie Baseball: The Definitive Biography of Don Mattingly, as well as several books for young readers. He is also the coauthor of Out by a Step: The 100 Best Players Not in the Baseball Hall of Fame and Tales from the New York Rangers Locker Room.

Part of Tales from the Team
By Gilles Villemure and Mike Shalin
Foreword by Ed Giacomin
Published by Sports Publishing
Distributed by Simon & Schuster
LIST PRICE $19.99
PRICE MAY VARY BY RETAILER