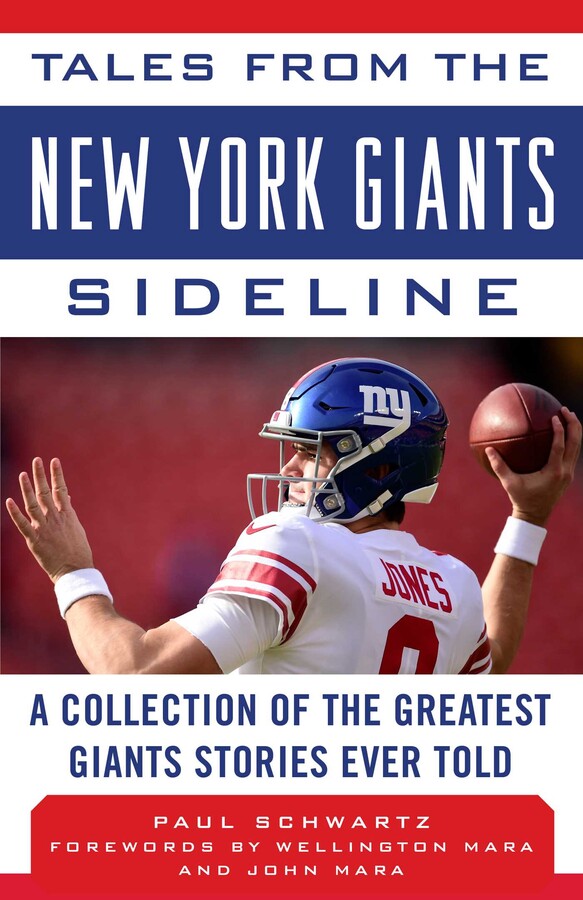 Part of Tales from the Team
By Paul Schwartz
Foreword by Wellington Mara and John Mara
LIST PRICE $19.99
PRICE MAY VARY BY RETAILER

Few sports franchises can match the long, storied history, rich tradition, and legion of passionate, loyal fans of the New York Giants. In this newly-updated edition of Tales from the New York Giants Sideline, memories, anecdotes, names, faces, games, cheers, and tears come rushing back, along with new twists to old fables and old remembrances revitalized with fresh insight.

Learn about so many Giants players, including Frank Gifford, Y. A. Tittle, Lawrence Taylor, Eli Manning, Saquon Barkley, and coach Bill Parcells. There is Phil Simms, nearly perfect in the biggest game of his life, Phil McConkey’s heart, David Tyree’s magic helmet, and Odell Beckham’s magic hands. Relive the Super Bowl victories in the 1980s, 1990s, 2000s, and 2010s. Experience the fearsome opponents, the feared defenses, the quarterbacks who could, and the ones who could not, with reminiscences bursting back to life in the words of the men who played the game.

Tales from the New York Giants Sideline tells the inside story of one of the NFL’s most popular teams. This book is unquestionably a must-read for all fans of the Big Blue.

Part of Tales from the Team
By Paul Schwartz
Foreword by Wellington Mara and John Mara
LIST PRICE $19.99
PRICE MAY VARY BY RETAILER