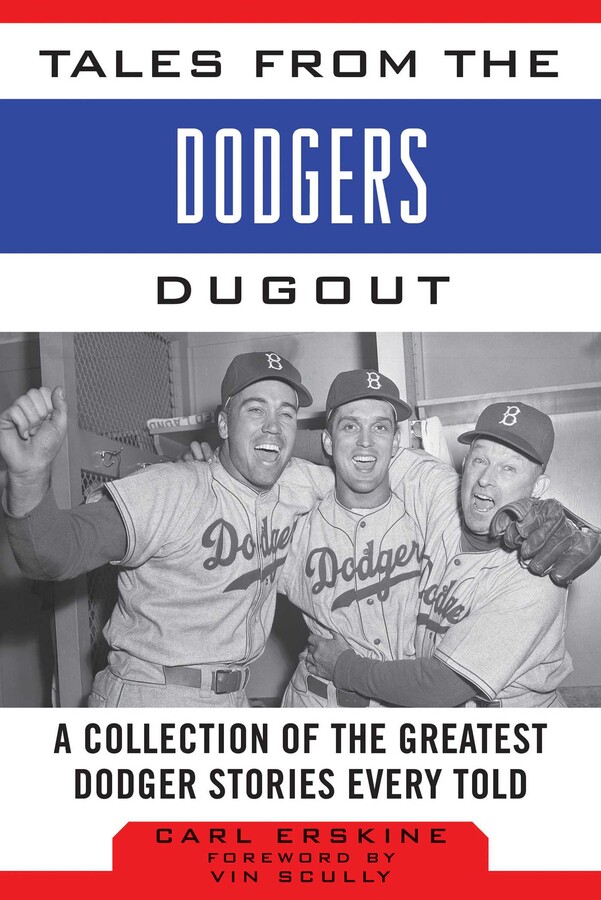 Part of Tales from the Team
By Carl Erskine
Foreword by Vin Scully
Published by Sports Publishing
Distributed by Simon & Schuster
LIST PRICE $19.95
PRICE MAY VARY BY RETAILER

To baseball fans of today, the name Dodgers” is synonymous with Hollywood, the warm California sun, and names like Tommy Lasorda, Kirk Gibson, Steve Garvey, and Orel Hershiser. The Dodgers mean much more than that to fans of baseball history, however. Namely, these fans remember the famed Boys of Summer,” otherwise known as the Brooklyn Dodgers, a team that included some of the most storied players in baseball history, such as Hall of Famers Duke Snider, Roy Campanella, Gil Hodges, Pee Wee Reese, and Jackie Robinson. Although they eventually moved out West, the Brooklyn Dodgers provided some of the greatest moments the game has ever seen and some of the greatest personalities to ever take the field.

Carl Erskine, another member of that legendary team, relates memories about his days with the Dodgers in a book full of true stories and revealing anecdotes. The result is Tales from the Dodgers Dugout, a delightfully interesting trip through the world of baseball in the 1950s. Among Erskine’s many tales are his dealings with immortal team official Branch Rickey, his view from the Dodgers’ bench during Don Larsen’s perfect game in the 1956 World Series, and his firsthand experiences when Jackie Robinson broke the color barrier and became the first black player in Major League Baseball history.

During his frequent speaking engagements, people often ask Erskine if all of his stories are true. His standard response has been, Yes, I couldn’t possibly make them up the way they actually happened.” Now fans can read all of those great stories in Tales from the Dodgers Dugout .

Part of Tales from the Team
By Carl Erskine
Foreword by Vin Scully
Published by Sports Publishing
Distributed by Simon & Schuster
LIST PRICE $19.95
PRICE MAY VARY BY RETAILER