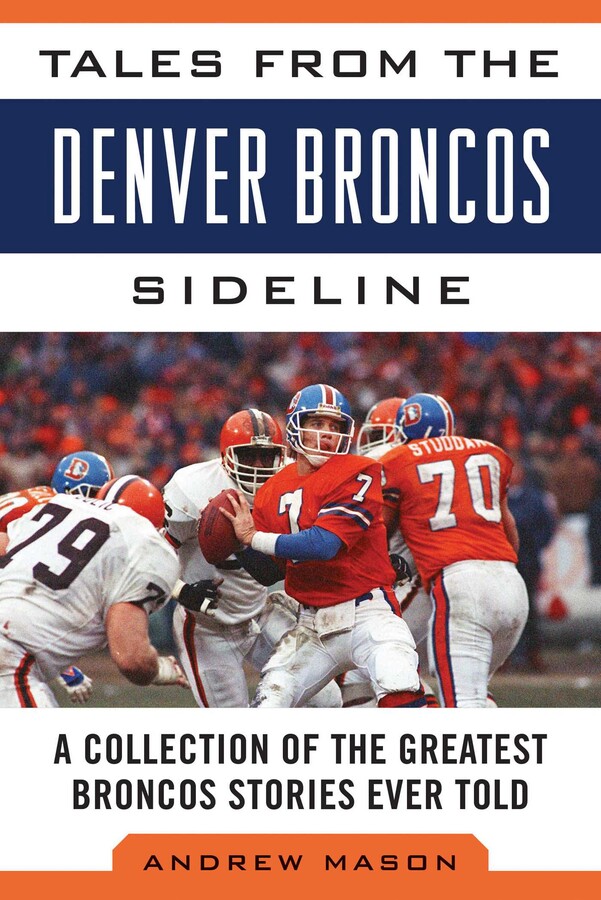 Part of Tales from the Team
By Andrew Mason
eBook
Hardcover Hardcover
LIST PRICE $12.99
PRICE MAY VARY BY RETAILER

This new addition to the best-selling Tales from the Sidelines” series captures the memorable moments, colorful characters, outstanding players, and championship seasons that are part of the Broncos’ storied history.

Beginning with the franchise’s origins as a charter member of the American Football League in 1960, Andrew Mason takes the reader on a journey that includes a decade of Bronco futility, the AFL-NFL merger, and the team’s first-ever playoff appearance in 1977, when they went all the way to the Super Bowl. Since then, the Denver Broncos have become one of the NFL’s most consistent and successful franchises, with just six losing seasons in the last thirty-five years.

Mason mines the team’s rich history for stories that are revealing, moving, and often hilarious. Examples from the first ten years are the worst uniforms ever,” the arrival of Lou Saban and Floyd Little, and the story of Marlin the Magician.” The 70s brought John Ralston, the 3-4 Orange Crush defense, the Miracle of ’77, and wild man Lyle Alzado. John Elway took the Broncos through the 80s and 90s, The Drive,” five Super Bowls, two championships, and the greatest walk off ever.” Fans are treated to the ups, downs, and frowns” of Jay Cutler, the Tebow miracles,” and the second coming of Peyton Manning.

Mile High Football” is alive and well in Denver, but it wasn’t always that way. In Tales from the Denver Broncos Sideline, Andrew Mason gives readers the stories of the low points that tested Broncos fans’ allegiance, the incredible highs that followed, and everything in between.

Andrew Mason has covered the NFL since 1999. He began with NFL.com and has written for the official websites of the Denver Broncos and Carolina Panthers. He has also contributed to The Sporting News and the New York Times. He lives in Denver, Colorado.

A fascinating and informative read from first page to last. A must’ for the legions of Denver Broncos fans.”
--Midwest Book Review

A fascinating and informative read from first page to last. A must’ for the legions of Denver Broncos fans.”
--Midwest Book Review

Part of Tales from the Team
By Andrew Mason
eBook
Hardcover Hardcover
LIST PRICE $12.99
PRICE MAY VARY BY RETAILER