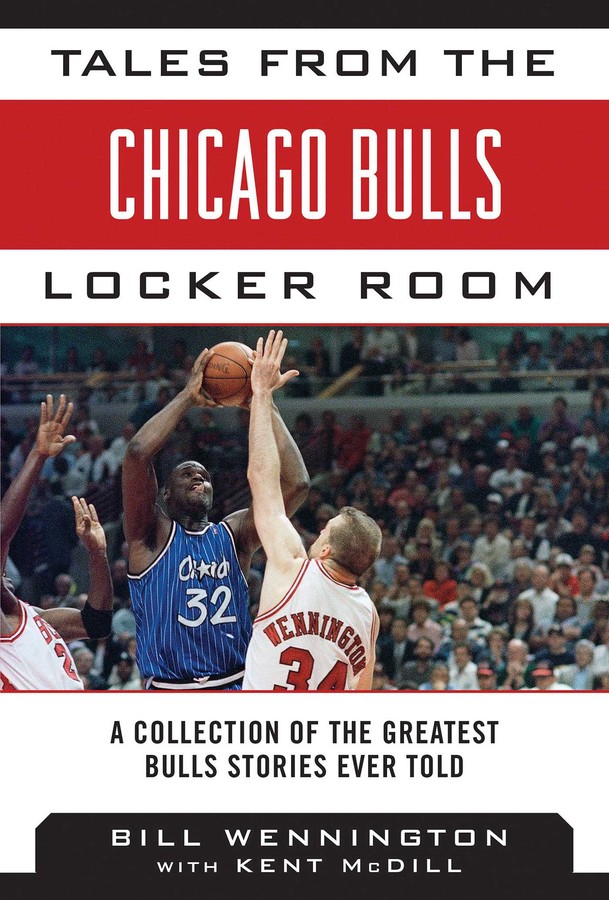 Part of Tales from the Team
By Bill Wennington and Kent McDill
Published by Sports Publishing
Distributed by Simon & Schuster
LIST PRICE $12.99
PRICE MAY VARY BY RETAILER

Chicago Bulls fans thought they had it so good. From 1991 through 1993 the Bulls won three consecutive NBA titles behind the talents of Michael Jordan and Scottie Pippen. When Jordan retired in the fall of 1993, those fans thought the good times were over. In the fall of 1995, however, Jordan was ready to make a full return to NBA action, Pippen was still the best number-two man in basketball, and then bad-boy Dennis Rodman was signed to join the franchise that had grown to hate him. Suddenly, the Bulls had the greatest team in NBA history.

Tales from the Chicago Bulls Locker Room tells some of the inside stories from that team, the one that won three more NBA titles from 1996 through 1998. Seen from the eyes of three-time NBA champion center Bill Wennington, the Bulls come to life from an insider’s point of view. Followed everywhere and talked about endlessly, the 1995-96 Bulls captured a national and international audience and continued to keep all eyes upon them for three seasons. Fans will read about some of the most famous names in basketball history. Jordan, the demanding team leader; Pippen, the true teammate; Rodman, the reckless rebounder; Toni Kukoc, the outsider; Ron Harper, the former star-turned-role player; Luc Longley, the affable Aussie; Steve Kerr, the John Paxson sequel; all playing for Phil Jackson, the Zen master coach. These are stories fans have not heard before, but it’s not their fault. They just weren’t there the way Bill Wennington was.

Part of Tales from the Team
By Bill Wennington and Kent McDill
Published by Sports Publishing
Distributed by Simon & Schuster
LIST PRICE $12.99
PRICE MAY VARY BY RETAILER