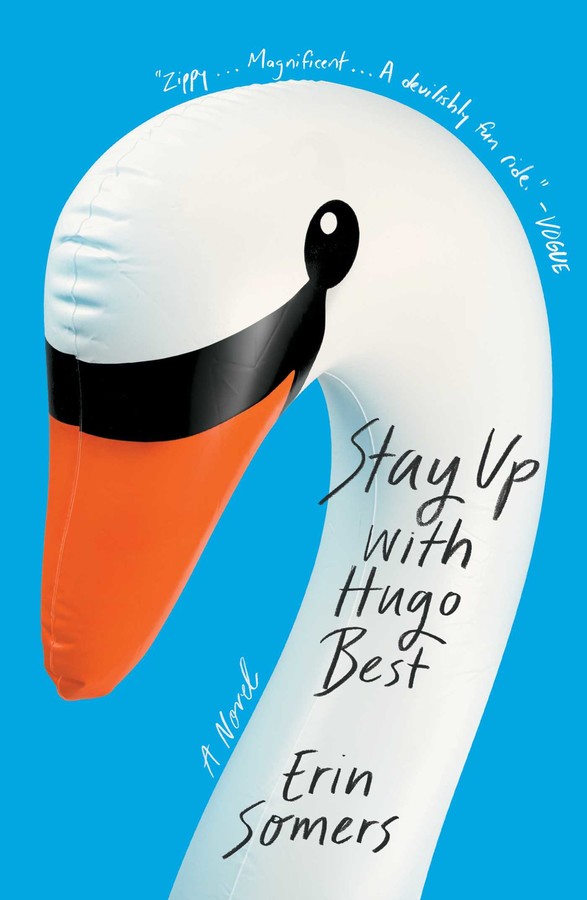 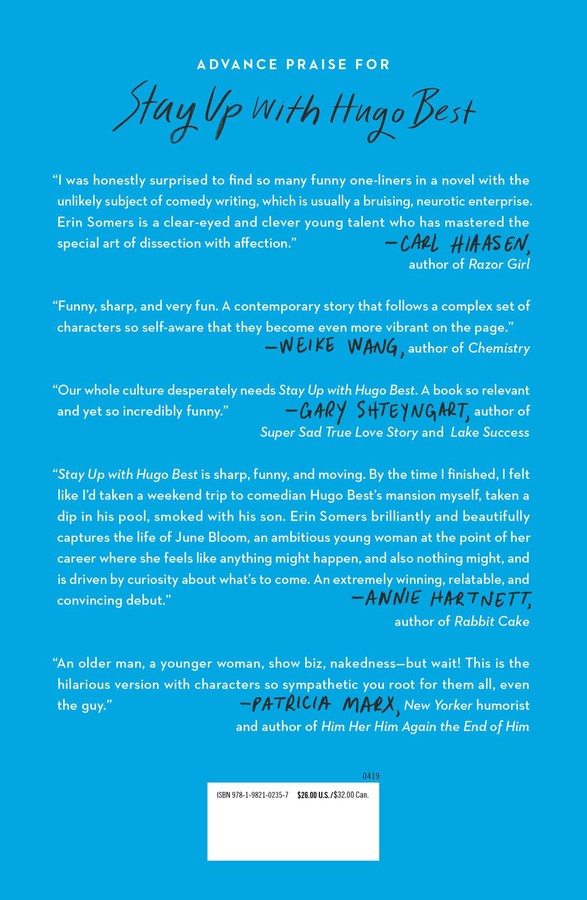 By Erin Somers
LIST PRICE $26.00
PRICE MAY VARY BY RETAILER

June Bloom is twenty-nine, broke, and an aspiring comedy writer. Hugo Best is a beloved late-night TV icon and notorious womanizer who invites her to his mansion for Memorial Day weekend. This is the story of their four days together, a “zippy…magnificent…devilishly fun ride” (Vogue).

When June Bloom, an assistant on the late-night comedy show, Stay Up with Hugo Best, runs into Hugo himself at an open mic following his unexpected retirement, she finds herself fielding a surprising invitation: Hugo asks June to come to his mansion in Greenwich for the long Memorial Day weekend. “No funny business,” he insists. “Incisive, funny, and tinged with melancholy, this timely novel follows two lost but clever souls desperate for connection” (Entertainment Weekly).

June, in need of a job and money, but harboring the remains of a childhood crush on the charming older comedian and former role model, is confident she can handle herself. She accepts. As the weekend unfolds and the enigmatic Hugo gradually reveals appealingly vulnerable facets to his personality, their dynamic proves to be much more complicated and less predictable than June imagined.

This reading group guide for Stay Up with Hugo Best includes an introduction, discussion questions, and ideas for enhancing your book club. The suggested questions are intended to help your reading group find new and interesting angles and topics for your discussion. We hope that these ideas will enrich your conversation and increase your enjoyment of the book.

1. June doesn’t give her roommate, Audrey, a serious answer as to why she accepts Hugo’s spontaneous weekend invitation (for “fun” and because there’s a pool at the house), but her thoughts in the moment about Hugo’s smile give us a clue. Why do you think June goes to Connecticut? If you were in June’s shoes, would you have accepted Hugo’s invitation?

2. Over the course of the weekend, June tells a number of lies: how she and her boyfriend met, what her major was in college, that she doesn’t care if people find her funny, etc. In some cases, we know from her inner thoughts that these lies are intended to subvert the preconceived notions that June, in her cynical way, suspects that other people have about her. In other cases, June is lying to herself as much as to others. Identify an instance where June isn’t being totally honest with herself. Why do you think she is avoiding this truth in particular?

3. On Saturday Hugo cracks a joke to June after overhearing a tense phone conversation she has with her boyfriend in the car. Relieved, June thinks, “Banter I could do. It was [Hugo’s] sympathy I didn’t think I could face, the thought that I had come here and made him feel bad for me” (page 64). Why is June so loathe to accept Hugo’s sympathy? What does this scene reveal to us about the role banter, and more generally humor and comedy, play in her life?

4. Spencer and June are closer in age than June and Hugo. Compare their respective roles within their own families, based on June’s memories of her parents’ visit to New York (p. 124) and Spencer’s interactions with Hugo over the course of the weekend. Which family would you rather be a member of?

5. “I wanted [Hugo’s] fame and hated that I wanted it,” admits June (page 201). How do June, Hugo, Spencer, and Julian see fame differently? Is fame more than a fickle friend for anyone in the novel?

6. During his interview with Casey Caruso, Hugo emphasizes the importance of supporting female comics despite dismissing June’s points about inclusivity the night before. June wonders if he has stolen her ideas simply to make himself look good or if he has genuinely learned something from her. Which do you think is true?

7. Discuss your reactions to the revelation about the fan who stabbed Hugo. In what ways, if any, did this change your perception of him? Why do you think Hugo keeps the details a secret from Spencer?

8. There is a lot of comedy in Stay Up with Hugo Best. For June’s father, comedy is “for making people laugh”; for June, comedy is meant to “challenge the culture” (page 128). Which did this novel as a whole do more of for you?

9. From Kitty Rosenthal to the events aboard Duck Soup, discuss how Hugo and June’s relationship comments on the #MeToo movement and the questions raised about power dynamics and sexual assault. Did Hugo have “funny business” on his mind the whole weekend?

10. June is twenty-nine years old and well past her teenage years. Nevertheless, Stay Up with Hugo Best can be thought of as a coming-of-age story. How has June changed in the three days she spends in Connecticut?

11. We learn Hugo’s fate at the end of the novel. Where do you imagine June will be in five years? What will she be doing with her life?

1. With your book club, check out recordings of some of the comics June and Hugo idolize, including Don Rickles, George Carlin, Bob Hope, Richard Pryor, Lenny Bruce, and Andy Kaufman, and discuss your reactions to their various styles of comedy.

2. Read Labor Day by Joyce Maynard or Independence Day by Richard Ford, two other novels set over holiday weekends. Compare the techniques used by the authors to tell a complete story over a short timeline. 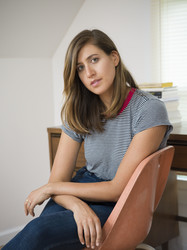 Erin Somers’s writing has appeared in The New Yorker, Tin House Open Bar, Ploughshares, American Short Fiction, McSweeney’s, The Cincinnati Review, and many other publications. She holds an MFA from the University of New Hampshire and was a 2016 NYC Center for Fiction Emerging Writer Fellow and a 2016 Millay Colony resident. She lives in Beacon, New York, with her husband and daughter. Stay Up with Hugo Best is her first novel.

“On the surface, Somers' debut is light and breezy, but the narrative is deft, controlled, and deadly smart. She mines depths out of Hollywood's propensity to look the other way when beloved men behave badly without a hint of preachiness. Instead, she's interested in complicity... What could be a straightforward novel about a young woman and an older man taking mutual advantage of one another is instead a brilliant study in how rarely we seize opportunities to grow and change for the better—especially if we're lucky enough to get more than one. An outstanding comedic debut about the deeply unfunny trials of growing up in and out of the spotlight. Somers is a writer to watch.”

"Stay Up With Hugo Best is a book that is also described as 'the perfect read for the #MeToo era,' but that isn’t just a platitude. The novel follows June, a junior staffer at a late-night TV show, who goes home with the much-older host of said show. You may think you know what happens next, but the novel doesn’t follow the sleazy old man plus naive ingenue playbook. It gives the agency to its rightful owner, a young woman stumbling into adulthood who must navigate an awkward weekend with her boss. Praised for its insider details of the world of late-night television, Stay Up With Hugo Best is a witty and subtle commentary on sex, power, and social politics."

“I was honestly surprised to find so many funny one-liners in a novel with the unlikely subject of comedy writing, which is usually a bruising, neurotic enterprise. Erin Somers is a clear-eyed and clever young talent who has mastered the special art of dissection with affection.”

"Our whole culture desperately needs Stay Up with Hugo Best. A book so relevant, and yet so incredibly funny."

"Funny, sharp, and very fun. A contemporary story that follows a complex set of characters so self-aware that they become even more vibrant on the page.”

“Stay Up with Hugo Best is sharp, funny, and moving. By the time I finished, I felt like I’d taken a weekend trip to comedian Hugo Best’s mansion myself, taken a dip in his pool, smoked with his son. Erin Somers brilliantly and beautifully captures the life of June Bloom, an ambitious young woman at the point of her career where she feels like anything might happen, and also nothing might, and is driven by curiosity about what’s to come. An extremely winning, relatable, and convincing debut.”

"An older man, a younger woman, show biz, nakedness--but wait!  This is the hilarious version with characters so sympathetic you root for them all, even the guy."

– Patricia Marx, New Yorker humorist and author of Him Her Him Again the End of Him

"Both challenging and, yes, entertaining.”

"This timely and often very funny novel speaks to how the #MeToo movement swept Hollywood—and the comedy world in particular."

"Somers sidesteps the predictable path the reader might expect this weekend to take, instead meandering into subtle, surprising territory. Within the strict temporal boundaries she has set herself, Somers depicts two equally lost souls unable to connect on a deep level. This is a winning debut."

"A timely comment on sex and power in the entertainment industry... There are some great laugh-out-loud moments and one-liners, and the pace is steady throughout."

"Ingenious… With Hugo Best, Somers deftly teases out the muddled and sometimes inappropriate relationship men like him have with fame, aging and the women who get caught in their wake… Somers does a great job balancing June's competing feelings… Somers shines when depicting the little moments between the two, which are funny and poignant... Stay Up with Hugo Best itself never feels unsure: Somers knows exactly when both the laugh lines and the cringes should hit."

"Anything other than predictable."

"Exceedingly clever... Erin Somer’s debut novel is definitely worth staying up for.

By Erin Somers
LIST PRICE $26.00
PRICE MAY VARY BY RETAILER

You may also like: Book Club Favorites ARC Giveaway