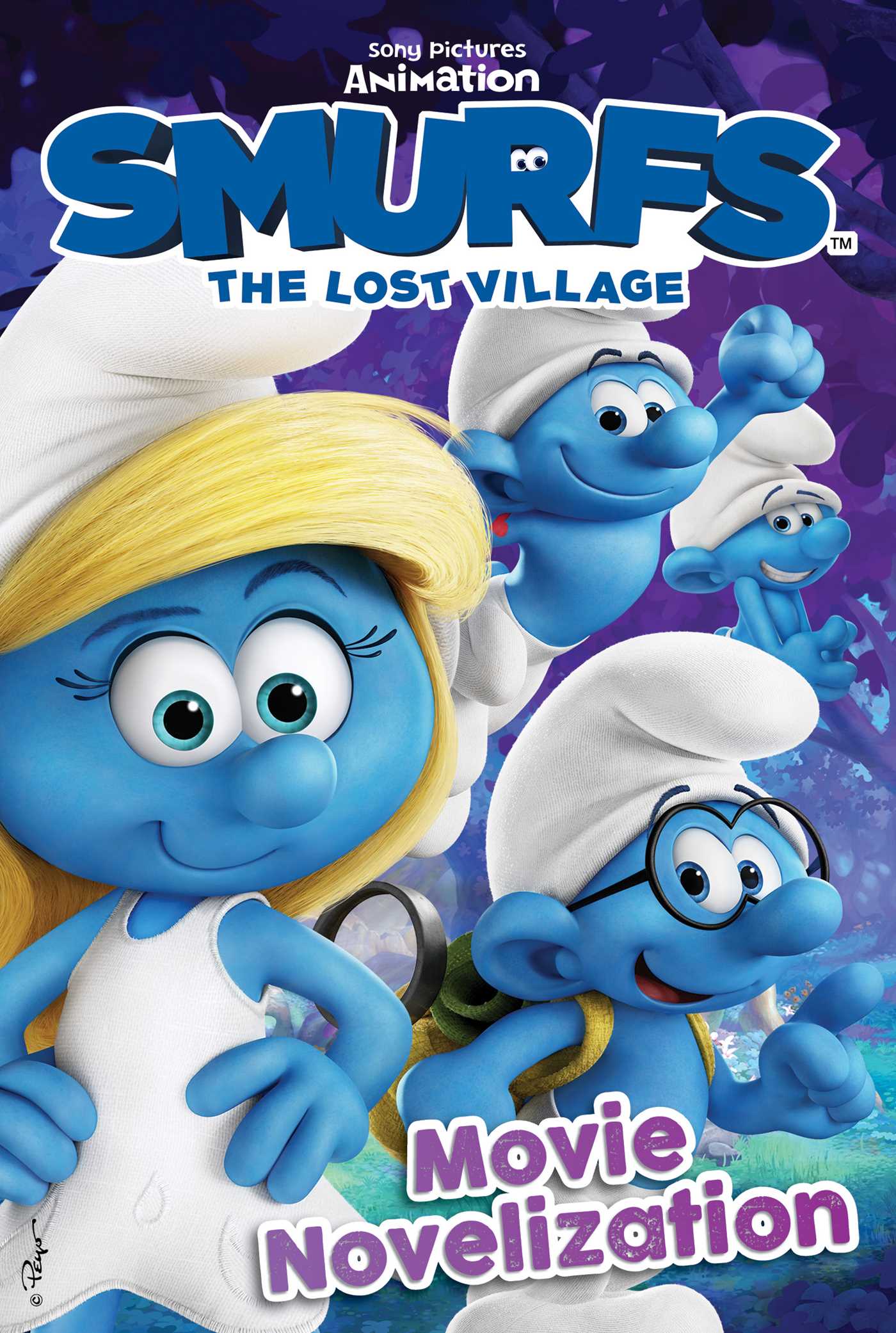 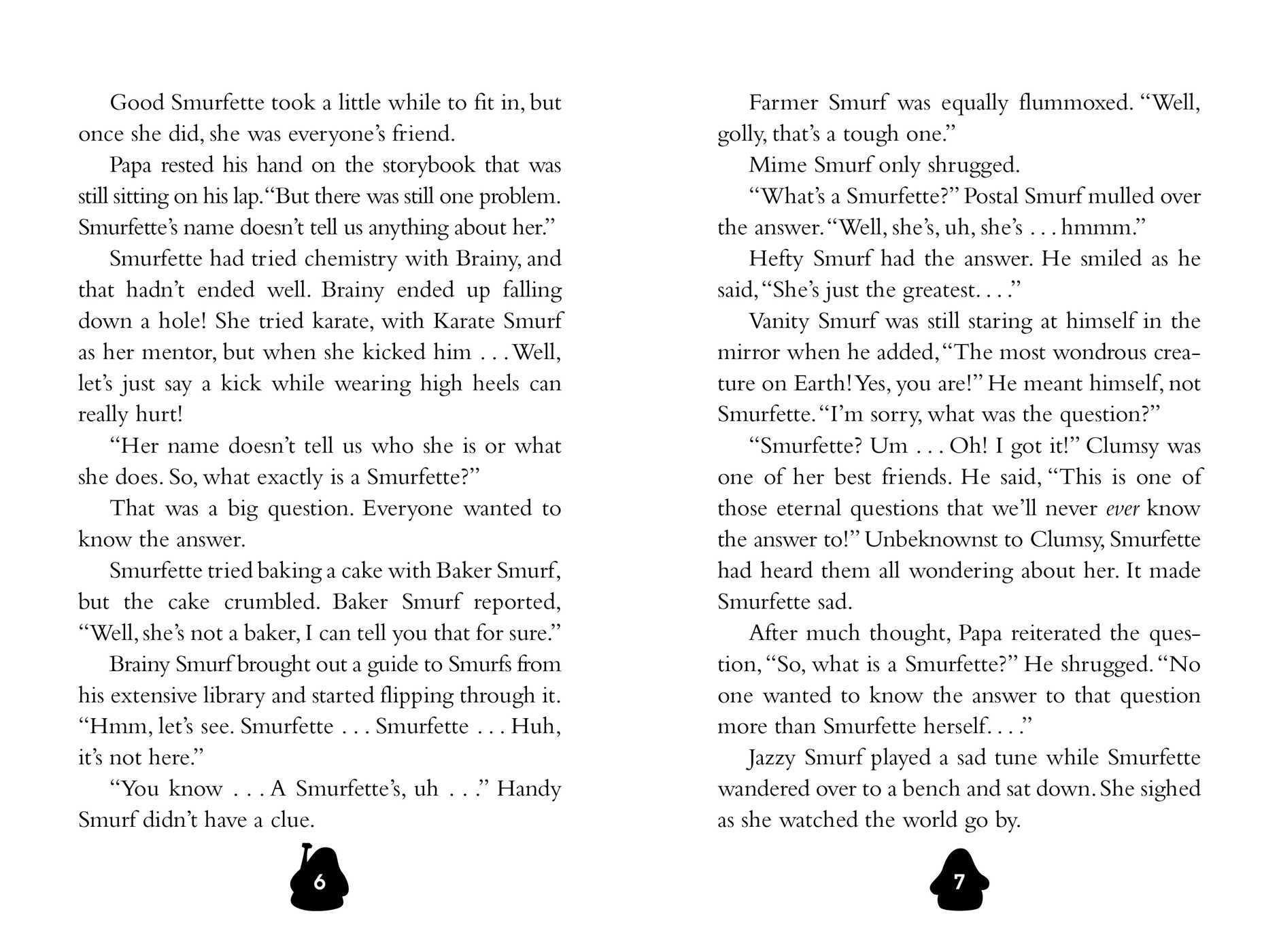 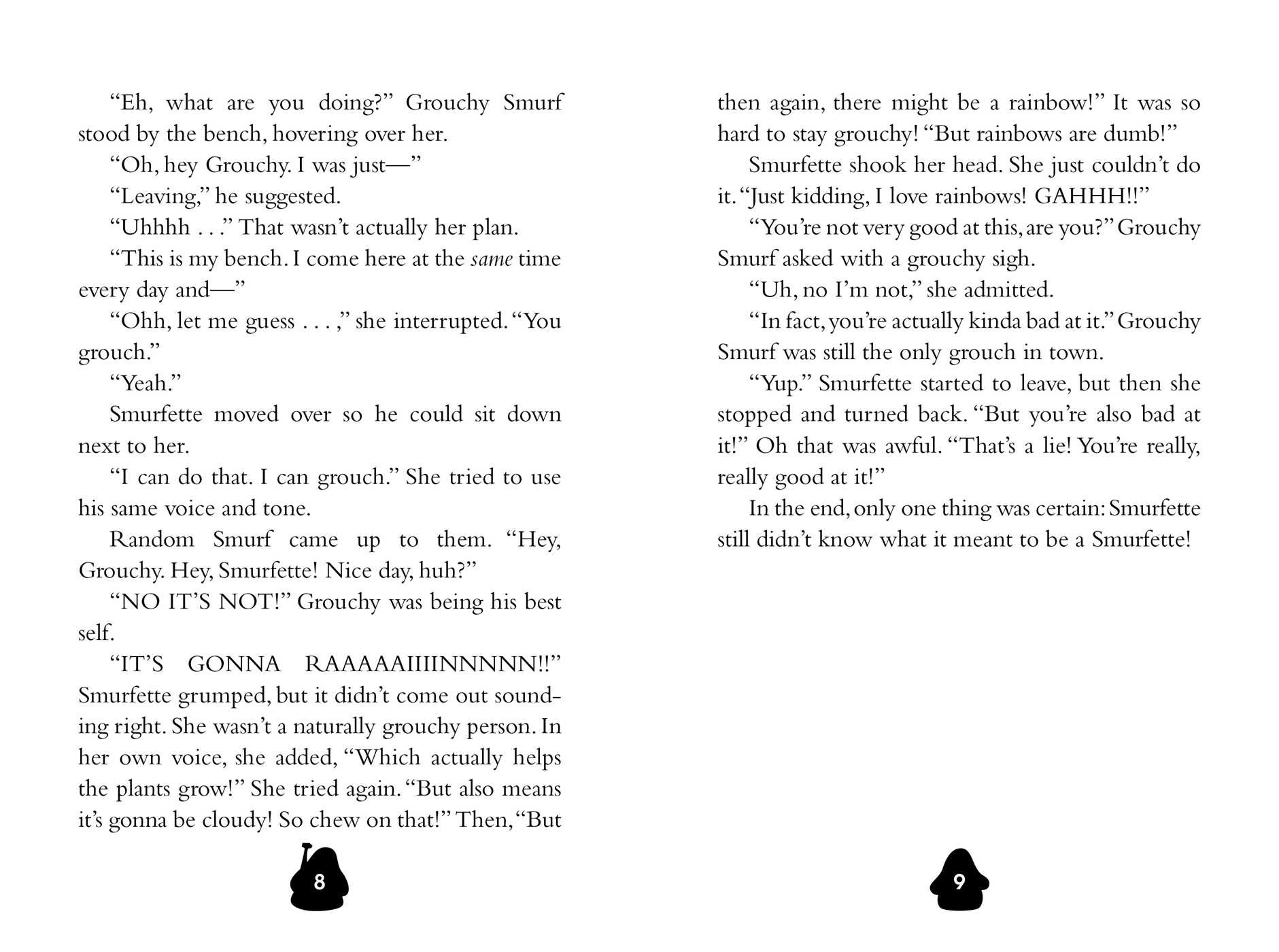 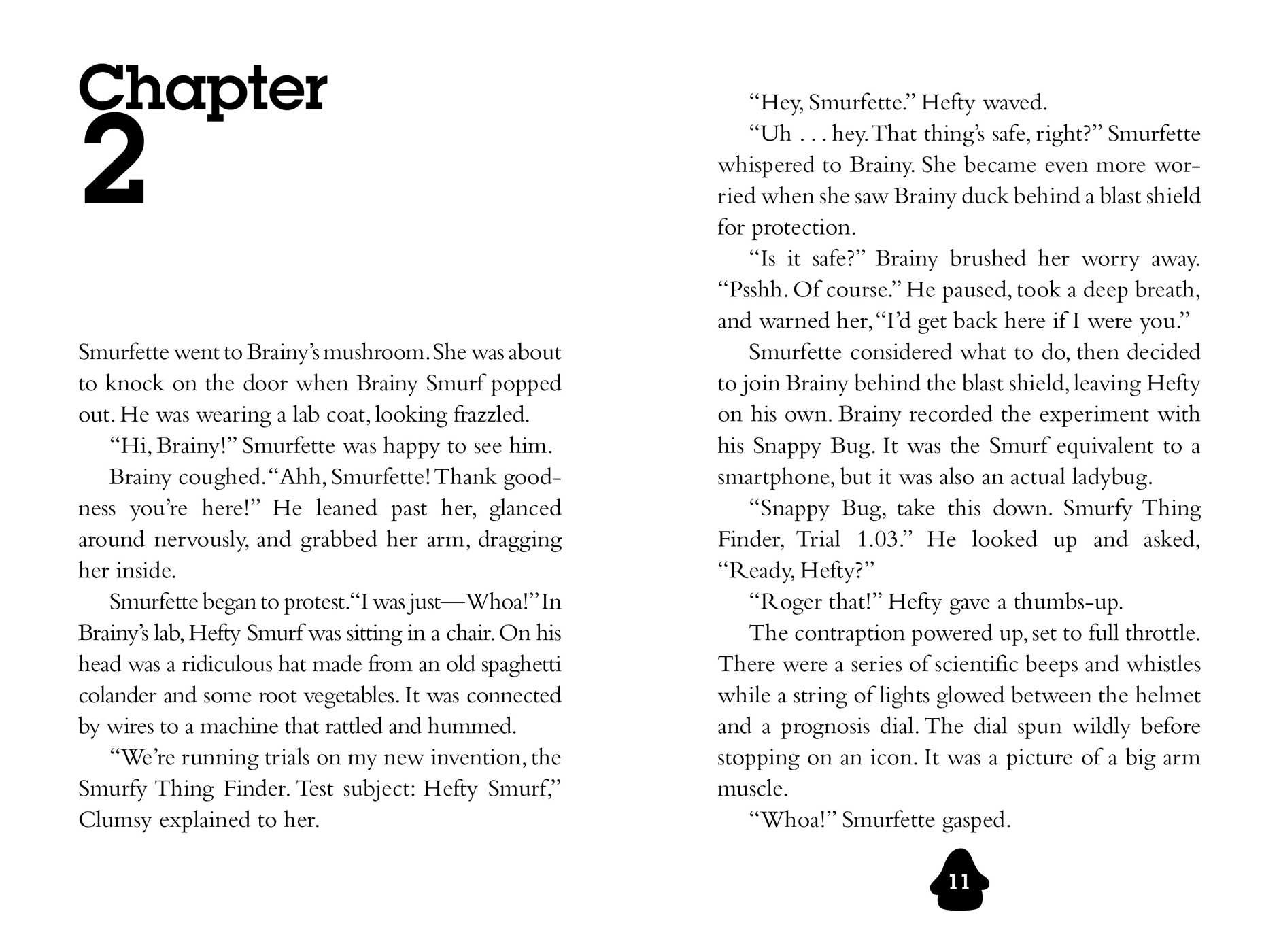 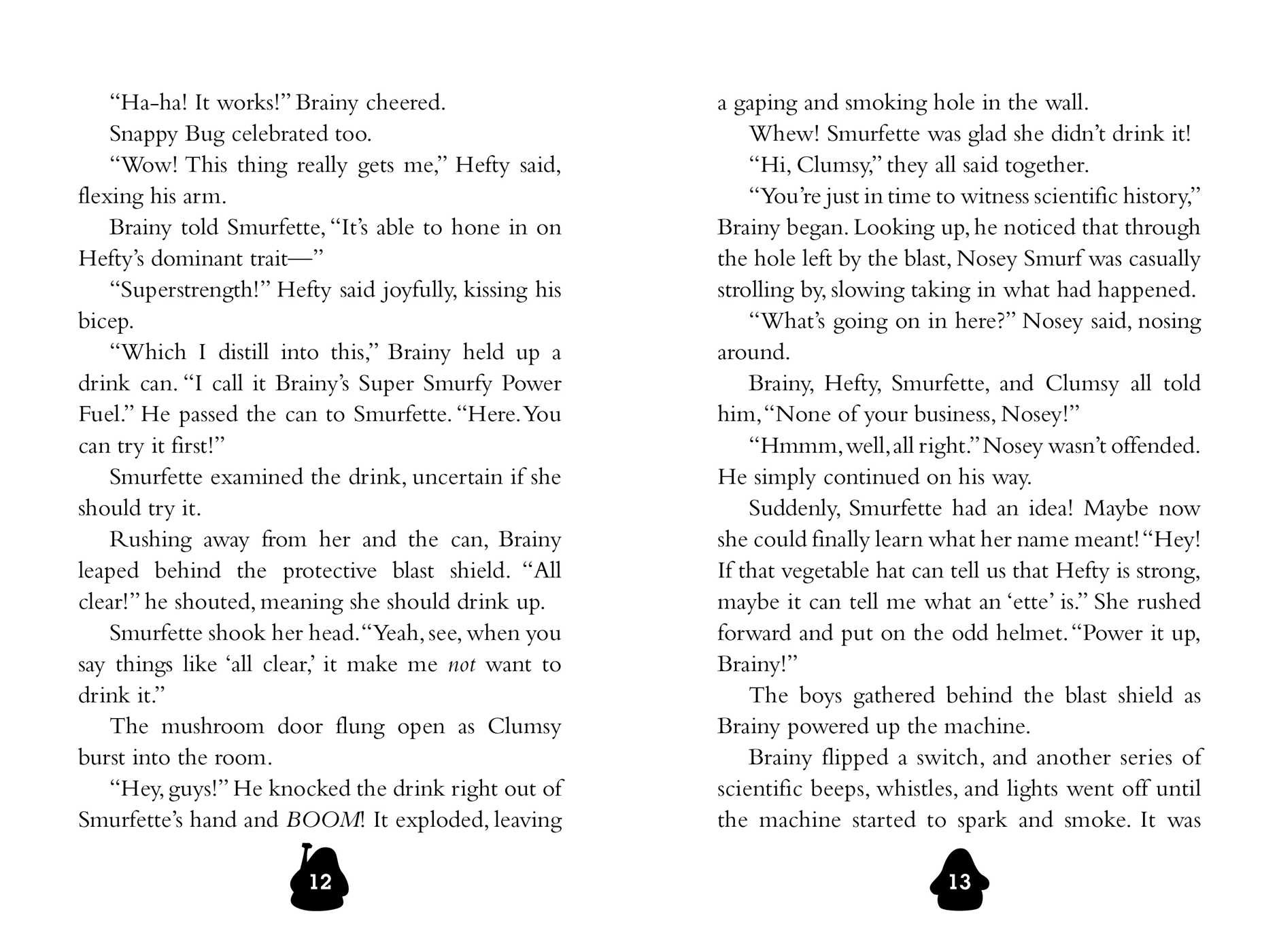 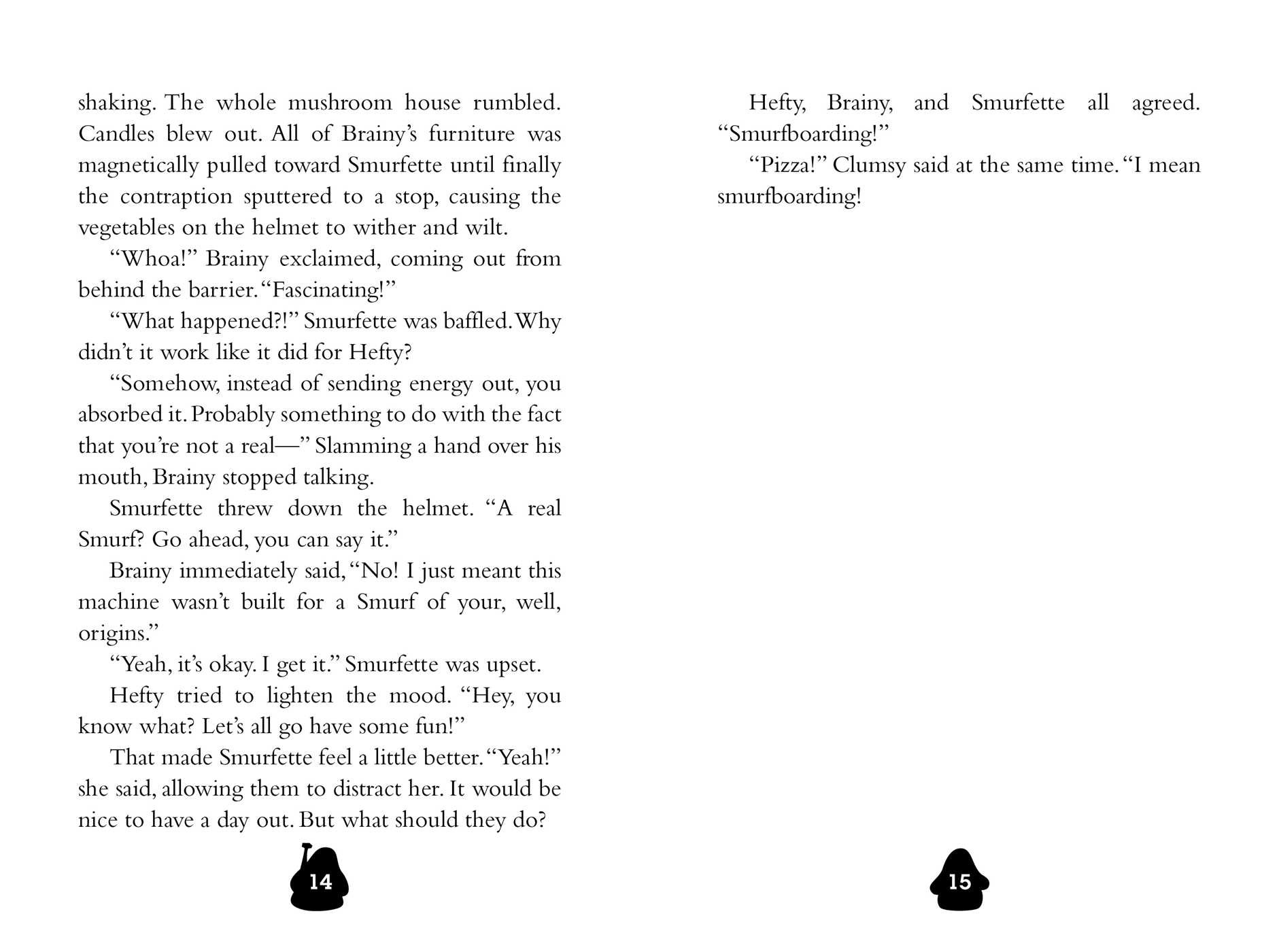 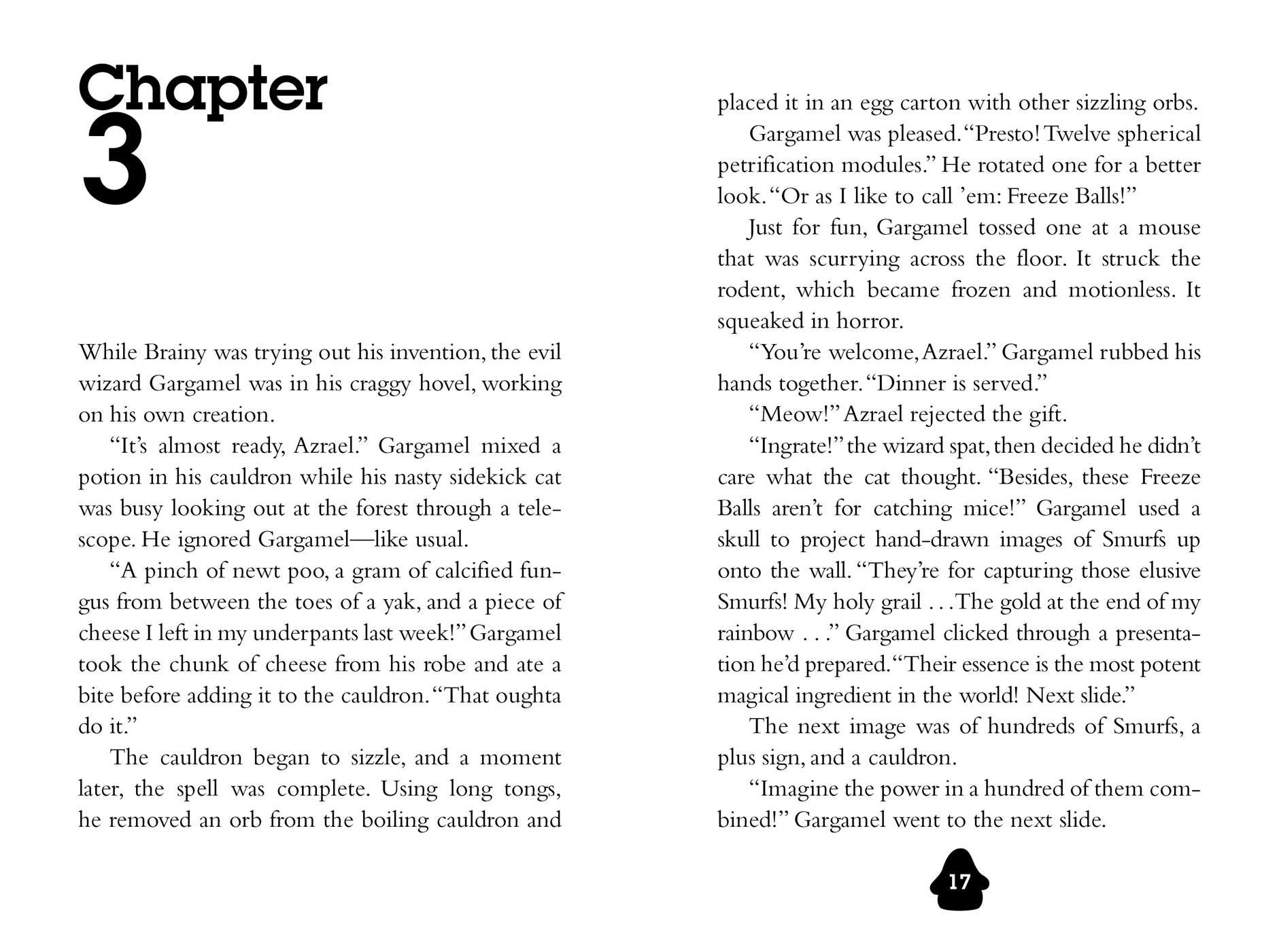 The Smurfs go on an all-new adventure in this action-packed retelling of Sony Picture’s Animation’s film, Smurfs: The Lost Village!

It seems to Smurfette that everyone else in the Village has a purpose—Papa Smurf leads, Baker Smurf bakes, and Grouchy grouches—except for her. So what’s the only girl Smurf in the village to do? Go in search of her purpose, of course! When she accidentally crosses paths with a mysterious creature that takes off into the Forbidden Forest, she follows, and the adventure begins!

Smurfette is joined by Hefty, Brainy, and Clumsy, and together they form Team Smurf. With the evil wizard Gargamel shadowing their every step, they embark on a wild journey full of action and discovery, and set off on a course that leads to the biggest mystery in Smurf history!

Smurfs The Lost Village Movie Novelization Chapter 1
“Many great adventures usually start somewhere interesting. Case in point: This one begins in a secret place hidden deep in the forest. Welcome to Smurf Village, where all the Smurfs live happily in their quaint mushroom houses.” Papa Smurf looked up from the book he was holding and turned toward the window, where Smurf Village was bustling with activity. “Oh, what’s a Smurf you ask? Well, how about a little background.”

Just then, a Smurf came barreling into town, bumping into anything and anyone in his path.

Here was the perfect example. “So this is a Smurf. Tiny, blue, funny hat. And they look pretty darn good in a pair of white tights. What does a Smurf do? Just ask him his name. For instance, his name is Clumsy,” Papa said with a knowing grin.

“Hi!” Clumsy waved, not watching where he was going. It was no surprise when he tripped, tumbled, and fell into a hollowed-out log.

With a small chuckle and shake of his head, Papa Smurf went on with his introductions.

“Just kidding. I meant to give you this one,” he said, producing another box.

“Wow, thanks!” Gullible accepted the present happily, but when he opened the box, a boxing glove sprang out and punched him in the face.

Across town, Hefty Smurf was doing push-ups. “Ninety-eight, ninety-nine . . . one hundred!” he grunted, kissing his big arm muscles. “And now for the one-fingered push-ups!”

“And over here is Nerdy Smurf,” Papa said as a Smurf rode by on a scooter.

“Excuse me?” the Smurf shot back.

“Watch this,” Instigator Smurf said with a mischievous grin. “Hey! Look out!” he called to Mime Smurf.

“Hmm . . . what’s going on over there?” Nosey Smurf wondered aloud.

Nosey Smurf was watching everything through binoculars. He checked out Paranoid Smurf, who quickly closed his window blinds.

“There’s also Winner Smurf and Loser . . . ,” Papa said, gesturing to two Smurfs playing checkers. Winner Smurf was about to celebrate when Loser Smurf flipped the chessboard over in a fit of rage.

“Karate Smurf.” Papa waved to a Smurf who kicked Gullible Smurf in the stomach.

Vanity Smurf admired himself in his mirror.

Painter put the finishing touches on his masterpiece.

Baker Smurf set out a cake to cool.

Magician Smurf made the cake disappear.

And there were even more: Scuba Smurf, Policeman Smurf, Therapist Smurf, Table-Eating Smurf . . .

Papa Smurf paused at Table-Eating Smurf and admitted, “Yeah, we’re not too sure about him either.” He shrugged, saying, “And then there’s me—Papa Smurf. I rock the red tights.” Papa chuckled so hard his belly shook. Then suddenly stopped. “But this story isn’t about me. And it isn’t about them. It’s about her.”

Outside, a Smurf with long blond hair, wearing a white dress, passed by Papa’s window.

“Smurfette,” Papa said with a fond smile. “The only girl in our village.”

The other Smurfs cheerfully greeted Smurfette as she wandered through town.

“Hey, Laundry Smurf!” Smurfette waved at him, then at the next group of Smurfs she saw. “Hey, guys!”

Papa leaned back in his chair. “But that’s not the only thing different about Smurfette,” he explained. “She was created by the evil wizard, Gargamel. With the help of dark magic, he made Smurfette from a lump of clay.”

High above Smurf Village there was a run-down castle on the side of a rocky mountain. The hovel was isolated, and the weather there was always terrible. The dark sky was filled with lightning blasts and thunderous roars.

Inside the shadowy ruin, the evil wizard had molded blue clay into a small Smurf-form. With a whip of his wand, he used dark magic to bring the clay form to life.

A moonbeam zapped the clay form, and an evil Smurfette rose from the smoke. This Smurfette was nothing like the one who lived in Smurf Village now. This one had a sinister smile.

Papa Smurf shivered. “At first, she was as bad as him. He sent her to find Smurf Village and help him capture us all.”

Evil Smurfette had entered the village with only one goal: She was there to cause trouble.

“Luckily, I also know a little magic of my own and was able to find the good in Smurfette and help her to shine,” Papa said.

Good Smurfette took a little while to fit in, but once she did, she was everyone’s friend.

Papa rested his hand on the storybook that was still sitting on his lap. “But there was still one problem. Smurfette’s name doesn’t tell us anything about her.”

Smurfette had tried chemistry with Brainy, and that hadn’t ended well. Brainy ended up falling down a hole! She tried karate, with Karate Smurf as her mentor, but when she kicked him . . . Well, let’s just say a kick while wearing high heels can really hurt!

“Her name doesn’t tell us who she is or what she does. So, what exactly is a Smurfette?”

That was a big question. Everyone wanted to know the answer.

Smurfette tried baking a cake with Baker Smurf, but the cake crumbled. Baker Smurf reported, “Well, she’s not a baker, I can tell you that for sure.”

Vanity Smurf was still staring at himself in the mirror when he added, “The most wondrous creature on Earth! Yes, you are!” He meant himself, not Smurfette. “I’m sorry, what was the question?”

“Smurfette? Um . . . Oh! I got it!” Clumsy was one of her best friends. He said, “This is one of those eternal questions that we’ll never ever know the answer to!” Unbeknownst to Clumsy, Smurfette had heard them all wondering about her. It made Smurfette sad.

After much thought, Papa reiterated the question, “So, what is a Smurfette?” He shrugged. “No one wanted to know the answer to that question more than Smurfette herself. . . .”

Jazzy Smurf played a sad tune while Smurfette wandered over to a bench and sat down. She sighed as she watched the world go by.

“Eh, what are you doing?” Grouchy Smurf stood by the bench, hovering over her.

“This is my bench. I come here at the same time every day and—”

Smurfette moved over so he could sit down next to her.

“I can do that. I can grouch.” She tried to use his same voice and tone.

“NO IT’S NOT!” Grouchy was being his best self.

“IT’S GONNA RAAAAAIIIINNNNN!!” Smurfette grumped, but it didn’t come out sounding right. She wasn’t a naturally grouchy person. In her own voice, she added, “Which actually helps the plants grow!” She tried again. “But also means it’s gonna be cloudy! So chew on that!” Then, “But then again, there might be a rainbow!” It was so hard to stay grouchy! “But rainbows are dumb!”

Smurfette shook her head. She just couldn’t do it. “Just kidding, I love rainbows! GAHHH!!”

“You’re not very good at this, are you?” Grouchy Smurf asked with a grouchy sigh.

“In fact, you’re actually kinda bad at it.” Grouchy Smurf was still the only grouch in town.

“Yup.” Smurfette started to leave, but then she stopped and turned back. “But you’re also bad at it!” Oh that was awful. “That’s a lie! You’re really, really good at it!”

In the end, only one thing was certain: Smurfette still didn’t know what it meant to be a Smurfette!